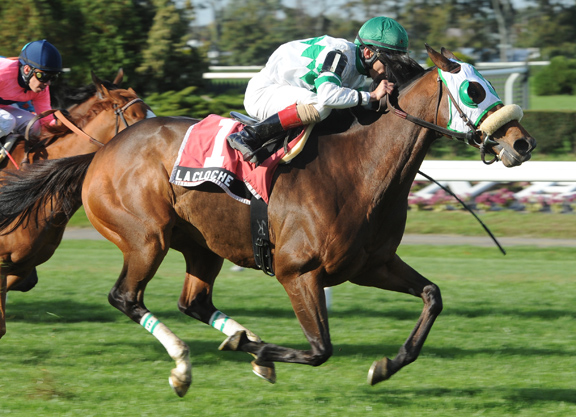 Sunday, September 13, 2020
5th-NKY, ¥13,400,000 ($126k), Newcomers, 2yo, 1600mT
AMERICAN PEACE (c, 2 Tapit–La Cloche, by Ghostzapper), a $325K Keeneland September acquisition, is the latest produce from his Grade III-winning dam, a $2.4m Fasig-Tipton purchase by this breeder who is responsible for American Peace’s full-sister Bellevais, also a Grade III winner on turf. Second dam Memories of Silver (Silver Hawk) was a two-time winner at the highest level, and her MGISW daughter Winter Memories (El Prado {Ire}) is the dam of the MSW & MGSP ‘TDN Rising Star’ Winter Sunset (Tapit). This is also the family of fellow GSW ‘Rising Star’ Hawkish (Artie Schiller). The colt’s Tiznow half-brother is consigned as hip 1035 at KEESEP next week. B-Don Alberto Corporation (KY)

This colt by Tapit is out of G3W La Cloche (Ghostzapper), who is a daughter MG1W Memories of Silver, and a half-sister to MG1W Winter Memories. Hip 480 is a full sibling to G3W Bellavais.

MELIODAS (c, 2, Uncle Mo–Fifty Foot Woman, by Giant’s Causeway) was also knocked down for $325K at KEESEP last fall and is out of a full-sister to GSW Excited, the dam of SW & MGSP Thrilled (Uncle Mo); and SW Wait Til Dawn. The May foal’s stakes-winning second dam Path of Thunder (Thunder Gulch) was a full-sister to GI Breeders’ Cup Distaff upsetter Spain and a half to MGSW Puerto Banus (Supremo) and GSW Fantastic Spain (Fantastic Fellow). A Curlin half-sister to Meliodas is set to sell as hip 162 during Sunday’s opening session at KEESEP. B-Fred W Hertrich III & John D Fielding (KY)

11th-CKO, Centaur S.-G2, ¥112.8m ($1.06m), 3yo/up, 1200mT
MR MELODY (h, 5, Scat Daddy–Trusty Lady, by Deputy Minister) returns to his best game in this prep for the Oct. 4. G1 Sprinters’ S. Winner of the G1 Takamatsunomiya Kinen (1200m) in 2019 (see below, gate 3), the bay was sixth in the JBC Classic on dirt last November and has just one start since, an unplaced effort in the G1 Yasuda Kinen over Tokyo’s metric mile June 7. A half-brother to GSP Trendy Lady (Unbridled’s Song), Mr Melody was RNAd for $75K as a KEENOV weanling, fetched $100K as a KEESEP yearling the following fall and was purchased by his current connections for $400K out of the 2017 OBS April Sale. B-Bell Tower Thoroughbreds (KY)

SHIVAJI (h, 5, First Samurai–Indian Bay, by Indian Charlie) won four of 13 starts on dirt to begin his career and though he has registered just one victory–a most improbable one at that– from five turf tries (video, gate 8), he has run with credit, including a close fifth to the fleet Mozu Superflare (Speightstown) in this year’s Takamatsunomiya Kinen. Produced by a daughter of GSW Buy the Barrel (E Dubai), Shivaji was a $90K KEESEP grad turned $540K OBSAPR breezer. His full-sister is cataloged as hip 1818 at this year’s KEESEP sale. B-Hinkle Farms (KY)