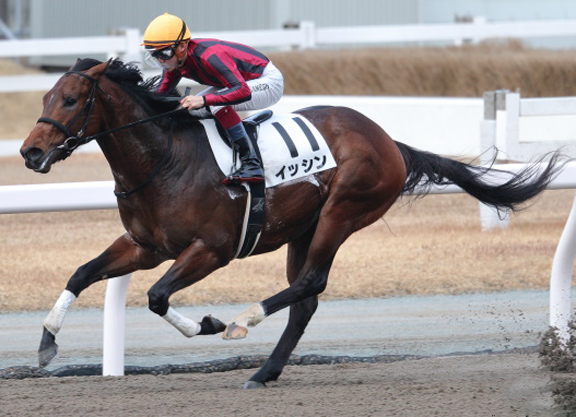 The fleet Isshin looks for his second career victory Saturday at Hakodate | jbis.jp

In this continuing series, we take a look ahead at US-bred and/or conceived runners entered for the upcoming weekend at the tracks on the Japan Racing Association circuit, with a focus on pedigree and/or performance in the sales ring. Here are the horses of interest for this weekend running at Hakodate and Hanshin Racecourses. The most important race of the weekend takes place Sunday at Toyko, which plays host to the G3 Unicorn S., one of two new races on the Japan Road to the Kentucky Derby. Four US-bred and one US-conceived sophomores are among the field of 16 for the 1600-meter test, which will be previewed in Saturday's TDN:

Saturday, June 20, 2020
7th-HAK, ¥14,360,000 ($134k), Allowance, 3yo/up, 1000m
ISSHIN (c, 3, Take Charge Indy–Appealing Stella, by Closing Argument), a debut third over 1200 meters in December, shortened up to this trip and made nearly every yard of the running to graduate by eight lengths the following month (see below, gate 11). Exiting a close fourth back over six furlongs in March, the $15K Keeneland November weanling, $32K KEESEP buyback and $100K OBS March breezer should take all the beating. B-Stonecliff Farm (FL)

8th-HSN, ¥14,360,000 ($134k), Allowance, 3yo/up, 1600mT
LOTUS LAND (f, 3, Point of Entry–Little Miss Muffet, by Scat Daddy) was a debut winner over course and distance last September and has since finished second in two of three starts, including a near-miss when trying 1800 meters at Toyko off a December layoff May 23 (video, gate 7). Hailing from the deeper female family of the now Japan-domiciled US GISW Gozzip Girl (Dynaformer), Lotus Land will be suited by this drop back to the mile and over a track with a more abbreviated run to the wire than at Toyko. B-Dr Aaron Sones & Dr Naoya Yoshida (KY)