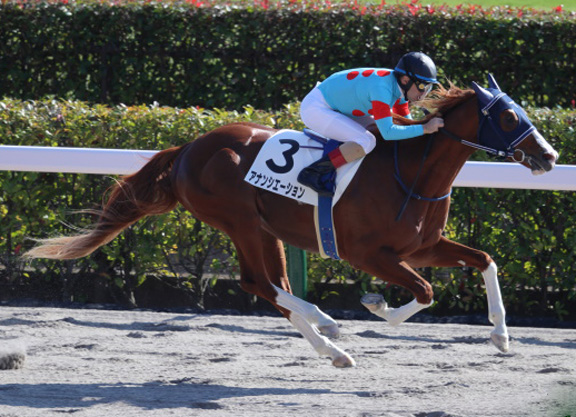 In this continuing series, we take a look ahead at US-bred and/or conceived runners entered for the upcoming weekend at the tracks on the Japan Racing Association circuit, with a focus on pedigree and/or performance in the sales ring. Here are the horses of interest for this weekend running at Tokyo and Chukyo Racecourses. The latter plays host to Sunday's G3 Silk Road S., which has drawn a typically full field of 18 turf sprinters, led by American-bred Group 1 winner Mozu Superflare (Speightstown) and the hard-knocking Shivaji (First Samurai):

4th-CKO, ¥11,400,000 ($109k), Newcomers, 3yo, 1800m
CAREERISM (c, 3, Upstart–Out of Goodbyes, by Out of Place) is the latest foal from his stakes-winning Massachusetts-bred dam, a half-sister to romping fellow Mass-bred black-type winner No More Goodbyes (More Than Ready). An $85K Fasig-Tipton November weanling purchase, this February foal was knocked down for $120K at FTKJUL in 2019 and fetched $200K at last year's OBS March Sale after breezing a quarter-mile in a strong :21 2/5. B-Golden Pedigree LLC (KY)

4th-TOK, ¥13,830,000 ($133k), Allowance, 3yo, 1600m
ANNUNCIATION (c, 3, Union Rags–Acquant, by Giant's Causeway) makes his 3-year-old debut in this spot, having hosed up by 3 1/2 very impressive lengths at short odds over course and distance Oct. 31 (see below, gate 3). A $230K KEESEP yearling that races in the colors of Silk Racing Co. Ltd., the chestnut is out of a winning daughter of MGSW Social Queen (Dynaformer), the dam of GISW Force the Pass (Speightstown). The chestnut with four white socks also hails from the female family of MSW & MGISP Wonder Gal (Tiz Wonderful). B-Colts Neck Stables LLC (KY)