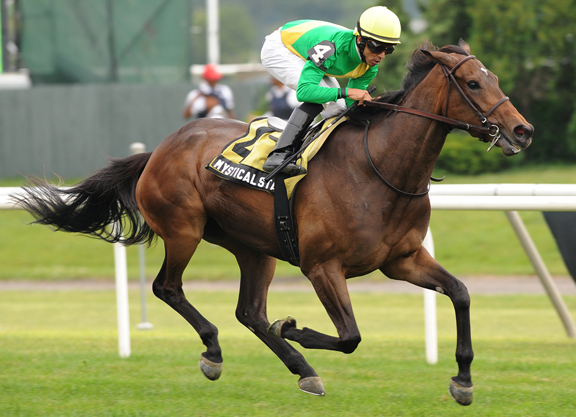 Sunday, January 17, 2021
4th-CKO, ¥11,400,000 ($110k), Newcomers, 3yo, 1800m
SEOJOON (c, 3, Liam's Map–Tiz Champ, by Tiznow) is the second foal to make the races from his dam, a daughter of Salt Champ (Arg) (Salt Lake), a three-time Group 1 winner at home and victorious in the GI Santa Monica H. in this country. Tiz Champ is a half-sister to Champ Pegasus (Fusaichi Pegasus), winner of the GI Clement L. Hirsch Memorial Turf Championship and second to Dangerous Midge (Lion Heart) in the 2010 GI Breeders' Cup Turf at Churchill Downs. Seojoon was hammered down for $110K at KEESEP. B-Arturo Vargas (KY)

4th-NKY, ¥11,400,000 ($110k), Newcomers, 3yo, 1800m
COSMIC MIND (c, 3, Into Mischief–Mystical Star, by Ghostzapper), a $280K KEESEP acquisition, is out of Cheyenne Stables' wire-to-wire winner of the grassy GII New York S. in 2012 who also gained Grade I black-type when runner-up in that year's Juddmonte Spinster S. over the Keeneland Polytrack. The colt's third dam Degenerate Gal (Degenerate) was a three-time GSW around two turns and was placed in the GI Shuvee H. B-Candy Meadows LLC (KY)