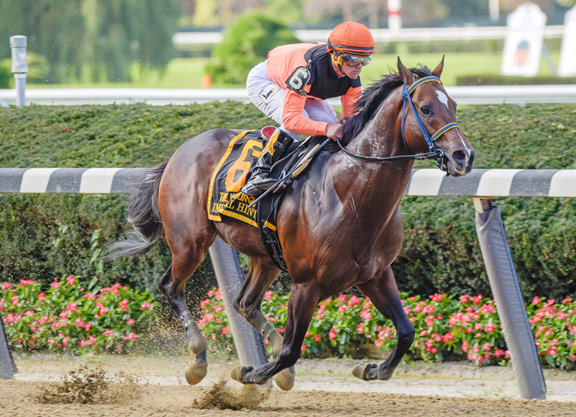 The speedy Imperial Hint (Imperialism) put on a show yet again, winning his second straight race at the highest level in what was the equivalent of a paid workout Saturday in Belmont's GI Vosburgh S., a “Win and You're In” for the GI Breeders' Cup Sprint in November. Hammered down to 1-5 favoritism in this overmatched field of seven, the 5-year-old seized the early advantage, cantering around on cruise control through early fractions of :22.09 and :44.37. Well clear and under a hand ride from Javier Castellano entering the lane, the dark bay skipped home to a facile victory, winning by 1 1/4 lengths under wraps. 'TDN Rising Star' Mr. Crow (Tapizar) was the only one even attempting to run at the favorite in the stretch and was all out to be second, finishing 3 3/4 lengths clear of Silver Ride (Candy Ride {Arg}).

“We wanted to try to get an easy race before the Breeders' Cup as a prep, because you don't really want to go into that race having to run really hard and I was happy the way the field for this race came out,” said winning trainer Luis Carvajal, Jr. “You always worry, especially when you're 1-5, 1-9, but the way he did it was good. I was a little worried at the end, hoping that Javier [Castellano] didn't hold him back too much, but the track is fast, and I couldn't ask for anything else from this little horse he was great.”

The conditioner continued, “I think three-quarters is his game. We'll see how he comes out of this race, but we'll most likely ship to Kentucky 10 days before the race.”

Winner of the GIII General George S. and GIII Smile Sprint S. last term, Imperial Hint was run down late by champion Roy H (More Than Ready) and forced to settle for second in the GI Breeders' Cup Sprint at Del Mar in November. The easiest of winners in the state-bred Sprint S. at Tampa Mar. 25, he weakened to be a head-scratching sixth in a sloppy renewal of the GII Churchill Downs S. going seven panels beneath the Twin Spires on the First Saturday in May. Besting recent last month's GI Forego S. victor Whitmore (Pleasantly Perfect) by a neck in Belmont's GII True North S. June 8, the dark bay followed suit with his first win at the highest level in Saratoga's GI Alfred G. Vanderbilt S. July 28.