'Nobody Knows Me But Everybody Knows Urban Sea': Jean Lesbordes Recalls The Extraordinary Mare 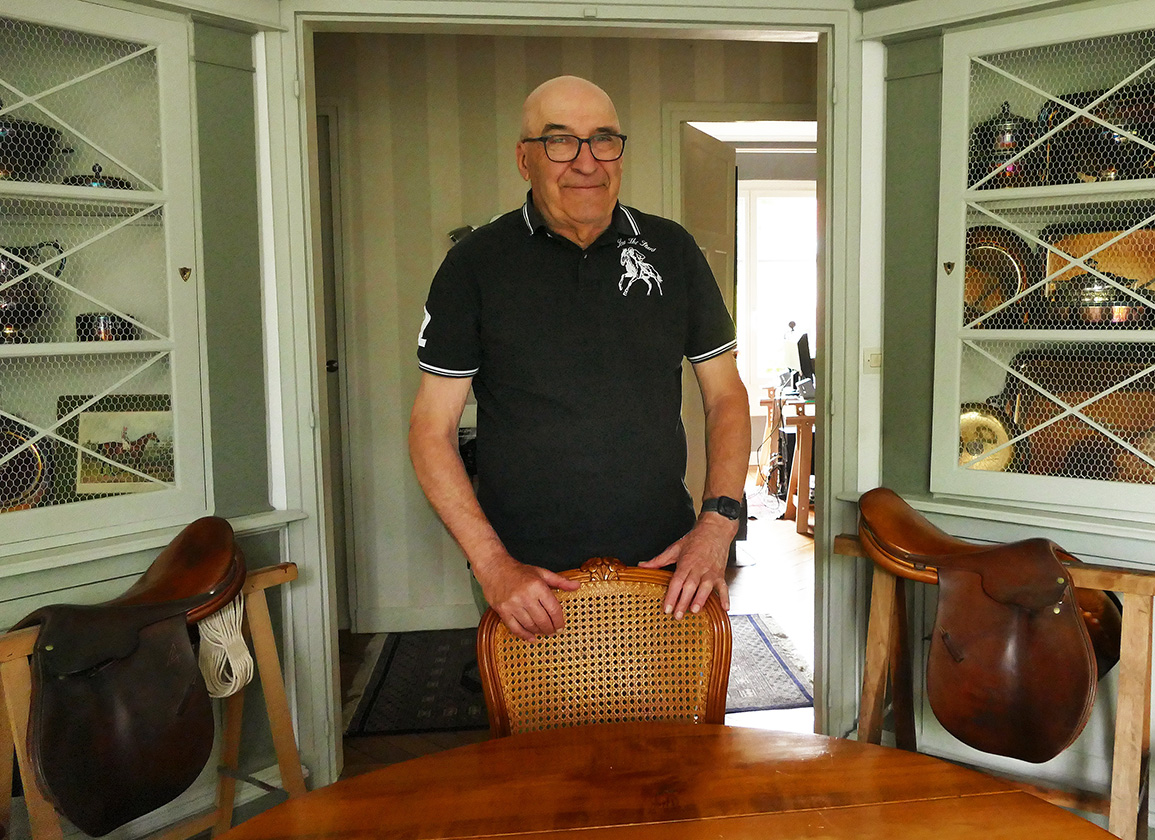 On the day of this year's French Guineas, Jean Lesbordes perused the runners in the paddock for the Prix de la Seine, made his way to the stands to watch the race, and then back to the winner's enclosure for another look at the victrix Hidden Dimples (Ire), a daughter of Frankel (GB).

Thirty years earlier, Lesbordes had a much stronger connection to the winner of the same race. He was her trainer and the filly's name was Urban Sea. The fact that her name appears in the third generation of the pedigree of Hidden Dimples will come as no surprise to anyone who has followed the progress of that great mare. It is an understatement to say that Urban Sea's influence has been profound; she is arguably the most significant matriarch of the modern era. Without her there would be no Galileo (Ire), and therefore no Frankel (GB). No Sea The Stars (Ire), who would come to emulate his mother by winning the race for which she is best remembered of her seven stakes victories, the 1993 Prix de l'Arc de Triomphe.

It is at Epsom that Urban Sea's legacy runs the deepest, however. When Sea The Stars followed his half-brother Galileo by winning the Derby in 2009, the guest of honour that day was trainer/breeder Arthur Budgett, whose broodmare Windmill Girl (GB) had been the last mare before Urban Sea to produce two Derby winners, starting 40 years earlier with Blakeney (GB) and followed four years later by Morston (GB).

It doesn't end there, of course. Galileo is now the sire of five Derby winners and grandsire of another two. One of those, Masar (Ire) (New Approach {Ire}), has Urban Sea on both sides of his pedigree as his third dam Melikah (Ire) (Lammtarra) is one of her four daughters, three of whom are now black-type producers themselves.

Sea The Stars, too, has sired the Derby winner Harzand (Ire) as well as Oaks winner Taghrooda (Ire), and he has the favourite for this year's Oaks in Emily Upjohn (GB). Nine of the top 10 in the betting for the Derby are all sons or grandsons of Galileo. Of the horses remaining in both Epsom Classics this weekend, 14 of the 18 potential Derby runners have Urban Sea in their pedigree, as do seven of 12 in the Oaks, not to mention 11 of 18 for Sunday's Prix du Jockey Club.

The Prix de la Seine of May 31, 1992 was really just the start for Urban Sea, certainly as far as the racing public was concerned. Though she had won an October maiden as a 2-year-old, this Listed contest was her first black-type victory, having finished third in the G2 German 1,000 Guineas on her previous start. For Lesbordes, however, it was really just the affirmation of a feeling he had had about Urban Sea ever since he first saw and fell in love with the chestnut daughter of Miswaki and Allegretta (GB) as a yearling at Marc de Chambure's Haras d'Etreham.

Everybody could ride her, even the girls who came to help at my stable on a Sunday. She was so straightforward. In our stable her name was 'La Mule'.

In partnership with Michel Henochsberg and Maurice Legasse, de Chambure bred Urban Sea at Denali Stud in Kentucky under their shared name of Marystead Farm. Her dam Allegretta, from a family with its roots deep in Germany's outstanding nursery Gestut Schlenderhan, was no one-horse wonder at stud. Her later foals included the 2,000 Guineas winner King's Best (Kingmambo) and G3 Prix de Flore winner Allez Les Trois (Riverman), who went on to produce the Prix du Jockey Club winner Anabaa Blue (GB) (Anabaa), but none would leave their imprint on the breed in the manner of Urban Sea.

“In the beginning I chose her on pedigree because she was by Miswaki and I remember when I went to Keeneland I saw Mr Prospector and I loved him,” says Lesbordes, who bought the yearling filly for FF280,000 (circa €33,000).

“I saw her in the stud, a grand-daughter of Mr Prospector, and I just felt that everything was right. That was just before the August Sale. When I saw her, I don't know why, but something about her spoke to me. So when she came to Deauville I said, 'this one is for me'.”

That first important decision made, Urban Sea returned to the Chantilly stable of Lesbordes, whose passion for horses was sparked by attending the races with his father in Bordeaux, close to where he grew up. From stints on a stud farm while still studying, he worked for several trainers before eventually training in his own right in the south-west of France, including a successful period with jumpers in Pau.

“I had some results so I ended up moving to Chantilly,” he explains of his journey north in 1986. “My ambition was to win every type of Classic, and the horses who weren't good enough for Classics could go jumping. On the Flat I didn't want to run in handicaps.”

Bar one period when the number of horses in his stable rose to around 60, Lesbordes usually trained around 25 horses. Urban Sea was one of 20 horses purchased for a single owner.

“I bought Urban Sea for a Japanese owner with a big string in France,” he explains. “I bought her in August and then by February the Japanese owner had a financial crash.”

Faced with the prospect of losing the horses, Lesbordes was fortuitously introduced to Hong Kong businessman David Tsui through a mutual acquaintance, and Tsui, originally in partnership with a friend, ended up buying the entire group.

“Our friendship has continued for more than 30 years,” says Lesbordes. He remains closely connected to the Tsui family and was present at Longchamp for the Arc victory of their homebred Sea The Stars, who raced in the colours of David and Ling Tsui's son Christopher.

That year was a momentous one. Urban Sea died from complications after foaling her final son, Born To Sea (Ire), in March 2009. Come April, Sea the Stars started his extraordinary romp, month after month, through six Group 1 races: the 2,000 Guineas, Derby, Eclipse, Juddmonte International, Irish Champion Stakes, and finally the Arc itself.

It is easy to see how Lesbordes is so strongly attached to his clear favourite of Urban Sea's offspring. It was not, however, instantly obvious to the trainer that he had a future champion on his hands when Sea The Stars's mother first entered training. In fact,  Urban Sea was given a nickname that is certainly not befitting of her now-legendary status.

“In the stable at the beginning she was the easiest to ride,” he recalls. “Everybody could ride her as a yearling, even the girls who came to help at my stable on a Sunday. She was so straightforward. In our stable her name was 'La Mule'.

“My son Clement started to ride her and when she started to work she was fantastic. As a 2-year-old she had a little issue  with her fetlock so we had to stop. But it was no problem and then she ran later at two and won the second time she ran at Maisons-Laffitte. She was very easy to train. She was asleep most of the time, but every time we showed her something she picked it up no problem.”

In my life as a trainer only three times I said 'I will win'. Three times. And the Arc was one of them.

It is this equable temperament that Lesbordes says he believes has been key to the success not just of Urban Sea but of her offspring. Of her 11 foals, nine raced, eight of which were black-type winners, four of those at the highest level. Certainly in assessing the phenomenal success Ballydoyle has had with Galileo, Aidan O'Brien refers regularly to the strength of his temperament and to that of his offspring.

“Sea The Stars had the same character,” says Lesbordes, who ceased training a handful of years after Urban Sea retired from racing as a 5-year-old. He later spent eight years working for the Paris-Turf.

“He started in training when I was working as a journalist so I had more opportunity to follow him. I saw Sea The Stars for the first time at Epsom for the Derby and when he came into the parade ring he was so quiet, almost asleep, just the same. Urban Sea gave him this disposition.

“It's incredible because all of her produce were fantastic. When you have a horse like Galileo you think that is pretty special, but then after that you have Sea The Stars. Incredible. Then there were the good fillies, and now they are all good producers, too.”

For Lesbordes, though the memories of Urban Sea are are still fresh decades later, they come with a bittersweet edge. His son Clement, her daily exercise rider who was 20 at the time of the mare's Arc victory, was killed in a cycling accident four years later. He had accompanied Urban Sea on her many trips abroad, to Japan, Hong Kong, England, Germany, Canada and America, with that road once travelled so happily together coming to the most tragically abrupt ending.

“I remember everything about Urban Sea,” says Lesbordes, now 76 and still resident in Chantilly.

He adds wistfully, “Nobody knows me but everybody knows Urban Sea. When I am finished Urban Sea will always be remembered. For me, it is extra special as my son took Urban Sea everywhere. It was magic.”

Of the most magical of all those days, he says, “I felt sure she would win the Arc. I was sure. I don't know why. In my life as a trainer only three times I said 'I will win'. Three times. And the Arc was one of them.

“On the day of the Arc I was quite nervous and I saw one of the breeders of Urban Sea, Michel Henochsberg. The race just before the Arc, Verveine (Lear Fan) won the Prix de l'Opera and Urban Sea had beaten her in Deauville in August. In the stables, Michel Henochsberg said to me 'C'est dommage'.

“I remember at the time it felt like a knife in the heart. But after the Arc it was not a shame at all!”