Noble Mission's Spanish Mission On Top In the Doncaster Cup 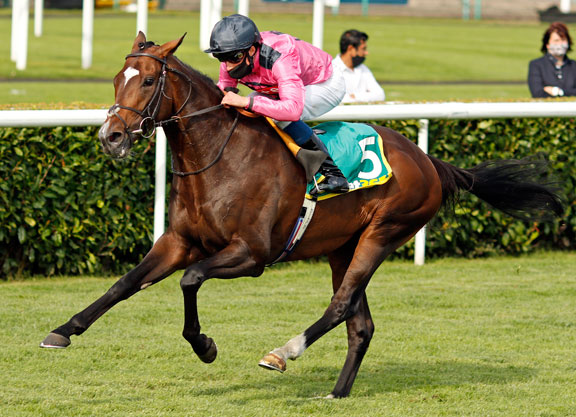 Tackling near two and a quarter miles for the first time, Team Valor and Gary Barber's Spanish Mission (Noble Mission {GB}) excelled at the trip to win Friday's G2 bet365 Doncaster Cup and stake his claim as a major player in the staying category. Always travelling easily in fifth for William Buick, the 6-4 favourite who had won the Aug. 20 Listed Chester S. after his move to Andrew Balding loomed alongside Selino (GB) (Champs Elysees {GB}) with purpose having already travelled two miles. Sent into the clear from there, he surged to a three-length success from that rival, with the long-time leader The Grand Visir (GB) (Frankel {GB}) four lengths adrift in third. “He was over-racing at stages, but he was never really doing too much,” Buick said. “He was always going to come into the race easily, it was just whether he'd see it out and he did see it out very well. He's got that bit of class against these stayers, that turn of foot. That together with his stamina is a good combination. I'm sure all those races will be on his radar. Who knows, potentially next year he might even make up into a Gold Cup horse.”

Coming to the fore when beating that solid yardstick Nayef Road (Ire) (Galileo {Ire}) by four lengths in Newmarket's 13-furlong G3 Bahrain Trophy in July, Spanish Mission was third behind him in Goodwood's G3 Gordon S. before annexing the Jockey Club Derby Invitational at Belmont in September. Second to this stable's Dashing Willoughby (GB) (Nathaniel {Ire}) in Sandown's G3 Henry II S. over two miles July 5, the bay was sixth on his final start for David Simcock in the July 28 G1 Goodwood Cup before his confidence-restoring three-length defeat of Selino on his bow for Kingsclere at Chester. Repeating that form to the exact margin here, he entered into the picture for the G2 QIPCO Long Distance Cup at Ascot. “That is really the only race for him if he is going to run again this year, but the ground might have gone too soft for him by then, so we'll see,” Balding said.

The first foal out of the listed-winning dam Limonar (Ire) (Street Cry {Ire}) was the Listed Rose Bowl S. winner and G2 Gimcrack S. runner-up Mokarris (More Than Ready). She is a half-sister to the GI Shoemaker Mile winner Talco (Fr) (Pivotal {GB}) from the family of the G1 Irish 2000 Guineas hero Bachelor Duke (Miswaki) and the G1 National S.-winning sire Fatherland (Ire). Her 3-year-old filly Dame Iris (Medaglia d'Oro) is unraced, while her yearling colt by Mastery is due to sell on Thursday at the Keeneland September Yearling Sale. She has been bred to Uncle Mo this year.