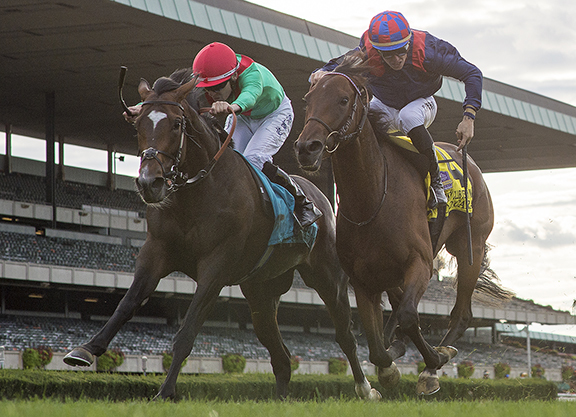 Two weeks on from Code of Honor's stirring victory in the GI Runhappy Travers S., Team Valor and Earle Mack's Spanish Mission (Noble Mission {GB}) gave his sire another marquee success, dropping his head down on the wire when it mattered most to just get the better of Pedro Cara (Fr) (Pedro the Great) in Saturday's $1-million Jockey Club Derby Invitational S. at Belmont Park, despite jockey Jamie Spencer losing his right rein in the final furlong. OTI Racing's San Huberto (Ire) (Speightstown) was along late to round out a European trifecta that returned a very generous $108.25 for a dollar. The victory earns Spanish Mission a spot in the gate for the GI Breeders' Cup Turf at Santa Anita Nov. 2.

“Going into the final turn he was giving me all he had. I dropped my right rein and even though I was using the crop, when you drop your reins in a race, it typically signals to the horse that the race is over,” said Spencer. “I would've been mad with myself had we lost, but he got back on his game and finished strong. He was a very game horse today.”

Added Team Valor's Barry Irwin: “When I bought him, the plan was to leave him in Europe this year and then bring him to America next year. Halfway through the season, I realized this is strictly a European horse and I told my guys, 'He's never coming home, but I'll bring him for this race.'”

A market firmer from 9-5 into 8-5, Spanish Mission eased to be off as the 21-10 chalk and was away a bit awkwardly from the outside stall in the field of nine. Saratoga Derby hero A Thread of Blue (Hard Spun) took them along, as expected, in advance of GI Belmont Derby victor Henley's Joy (Kitten's Joy), and the pace was moderate at best for the distance, with the opening quarter timed in :25.23 and the half a methodical :50.77. Second favorite Digital Age (Ire) (Invincible Spirit {Ire}) and Breeders' S. conqueror Tone Broke (Broken Vow) loomed up three and four wide, respectively, to inject some pace into the race at midway, but A Thread of Blue remained the boss and well within himself as they neared the second turn. The latter was given every chance from the front by Luis Saez and carried a daylight advantage into the final furlong and a half. Pedro Cara got first run and charged past A Thread of Blue with inside the eighth and Spencer lost the right rein when switching to a right-handed stick about 100 yards from home, but Spanish Mission stayed to his task and got the bob in.

“As the race developed, it was just beautiful to watch,” said Ian Russell, assistant to trainer David Simcock. “The further he went, the better he got into it and he just gets his head down. Jamie dropped his rein, but the horse stayed on and kept to his job. He knows his job and the further he goes, the better he's going to be. He's a lovely horse for the future.”

A maiden winner at second asking over the Chelmsford all-weather last November, Spanish Mission was acquired by this partnership and was fifth in the Road to the Kentucky Derby conditions stakes at Kempton Mar. 6. Switched to the turf thereafter, the $125,000 Keeneland September buy was a neck second in the Listed Cocked Hat S. at Goodwood May 24 ahead of a four-length success in the 13-furlong G3 Bahrain Trophy at Newmarket July 11. He was most recently beaten a neck into third when last seen in the G3 Gordon S. back at Goodwood Aug. 1 when he was short of room a furlong down and kicked hard once clear.

A half-brother to SW & GSP Mokarris, Spanish Mission is out of a stakes-winning half-sister to Talco (Fr) (Pivotal {GB}), stakes-placed in France and winner in this country of the GI Shoemaker Mile S. Third dam Gossamer was responsible for Irish highweight and 2004 G1 Irish 2000 Guineas hero Bachelor Duke (Miswaki), SW Translucid (Woodman) and GSP Smartcity (Smarty Jones). Limonar is the dam of a 2-year-old colt by Medaglia d'Oro, but was barren to Honor Code for 2018 before producing a Mastery colt this season. She was most recently bred to Uncle Mo.