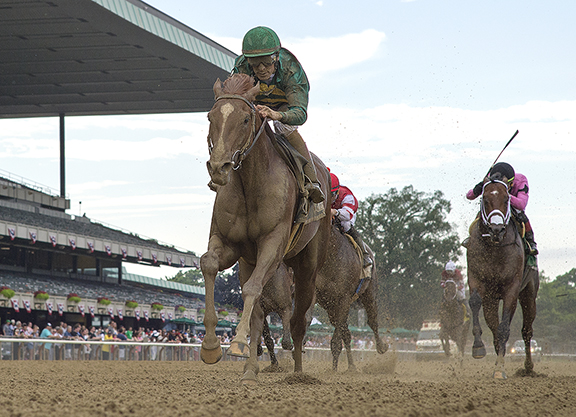 Third, but placed second in a rough-and-tumble renewal of the GI Kentucky Derby on the first Saturday in May, Code of Honor (Noble Mission {GB}) was not persevered with along the rest of the Triple Crown trail, with an eye on the second half of the season. Sent off the 1.15-1 favorite for Saturday's GIII Dwyer S., the diminutive chestnut followed the script to the letter, punching home late en route to an eye-catching defeat of Final Jeopardy (Street Sense). Rowayton (Into Mischief) parlayed a ground-saving trip into a third-place effort, albeit while no menace to the impressive winner.

Dropped out the back door by John Velazquez, Code of Honor caboosed the field as last-out Easy Goer S. hero Majid (Shackleford) set a leisurely tempo up ahead. Still content with his spot at the tail of the field as they raced into the sweeping far turn, Code of Honor was allowed to tack on to the peloton with Velazquez sitting chilly while following the move of the hard-ridden 'TDN Rising Star' Mihos (Cairo Prince) on the swing for home. Locked and loaded behind runners at the top of the lane, Code of Honor was angled off heels and to the outside of Final Jeopardy and covered his final two furlongs in a swift :23.57 to seal the deal in convincing style. Final Jeopardy made what appeared to be a winning move turning for home, only to be swamped late.

“I think that's exactly the way he wants to run; to just drop back out of it a bit and, depending on the pace, making one run like that,” said Shug McGaughey, winning his third Dwyer and first since Coronado's Quest took the 1998 running. “I thought he was a pretty easy winner today. Hopefully, we have a horse to come back with and we'll see what happens down the road.”

Impressive beneath Johnny V to win his maiden on Aug. 18 debut at the Spa, Code of Honor bombed the start of the GI Champagne S. Oct. 6 and did exceptionally well to finish second. Forced to miss the GI Breeders' Cup Juvenile after spiking a raceday temperature, the colt passed on the GII Remsen S. and was a disappointing fourth to Mihos in the Jan. 5 Mucho Macho Man S. over Gulfstream's one-turn mile. Taking advantage of a pace meltdown to post a 9-1 upset of the GII Fountain of Youth S. Mar. 2, he was third behind Maximum Security (New Year's Day) in the GI Florida Derby Mar. 30 when the race was not run to suit. A 14-1 shot in the Derby, he came with a run up the fence and was bothered by the wayward Maximum Security at the quarter pole, then could not quite sustain the bid and was home third before being promoted.

McGaughey indicated that the July 27 GII Jim Dandy S. could be next for Code of Honor en route to the GI Runhappy Travers S. Aug. 24.

Code of Honor is the only stakes winner from three stakes performers and 29 winners to date from the first crop of his sophomore sire, who is a full-brother to the incomparable Frankel (GB). Code of Honor's dam, the 2005 GIII Thoroughbred Club of America S. winner Reunited, has also produced 2016 GII Best Pal S. runner-up Big League (Speightstown) and has a yearling colt by Karakontie (Jpn). Her foal this spring was a colt by Honor Code, who shares the stallion barn with Noble Mission. Code of Honor's damsire, Dixie Union, also stood at Lane's End before his untimely death in 2010, as did his sire, Dixieland Band. The latter was a leading broodmare sire and Dixie Union's daughters are sending him on that same trajectory with 36 stakes winners to date, including champion Caledonia Road (Quality Road).