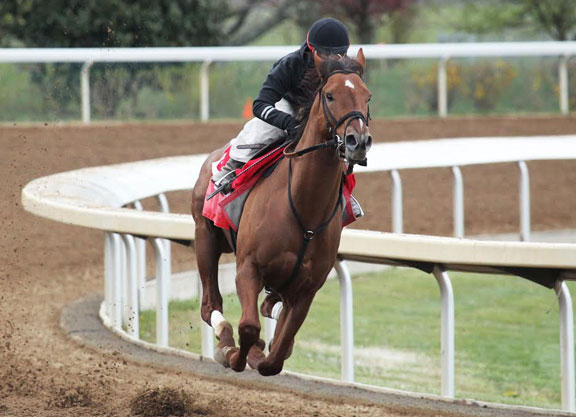 John Oxley's Noble Bird (Birdstone) worked a half-mile in :48 flat (10/46) beneath the Twin Spires Friday morning in preparation for a possible start in Belmont's GI Metropolitan H. June 11 rather than defending his GI Stephen Foster H. title June 18. With Julien Leparoux in the irons, the chestnut clocked an quarter-mile in :23.80 and falloped out in 1:01.

“I would say we're leaning toward the Met Mile,” said assistant trainer Norman Casse. “He's already won the Stephen Foster and it'd be really neat to win the Met Mile with him. It was a pretty important work for him [Friday] and we're trying to gauge whether to run in the Met Mile or Stephen Foster so I was really watching him pretty intently since he just ran. Everything is indicating that he's doing well if not better than before [he won the GIII] Pimlico Special [May 20].”

Casse feels the cut back in trip from 1 3/16 miles to Belmont's one-turn mile will suit Noble Bird well.

“We think it would suit him better because he's kind of a free-running horse,” Casse said. “We've decided that we're not going to try and rate him anymore. When you cut him back to a mile, he'll be with horses that he can't keep up with so he'll get to run his style race even though he'll be coming from out of it a little bit and we actually think that will suit him better.”

Also on the worktab for the Casse barn was the well-related World Approval (Northern Afleet), who was last seen finishing a game second to Divisidero (Kitten's Joy) in Churchill's GI Woodford Reserve Turf Classic S. May 7. The Live Oak Stud homebred breezed four panels in :49.40 (28/46) in preparation for a rematch with that rival in Belmont's GI Manhattan S. June 11.

“He's done extremely well since he last ran in the Woodford Reserve,” Casse said. “He's come back with two brilliant, sensational works since the race. The mile-and-a-quarter distance at Belmont is the big question mark but I think it's a question mark for everybody. All I know is the horse is doing really well and will run a big race.”

“Za worked real well,” Casse said. “We were disappointed in his last effort. He didn't really like the yielding turf course, so we may be pointing to the Wise Dan. Conquest Typhoon (Stormy Atlantic) worked with World Approval and he'll go to the Wise Dan for sure.”