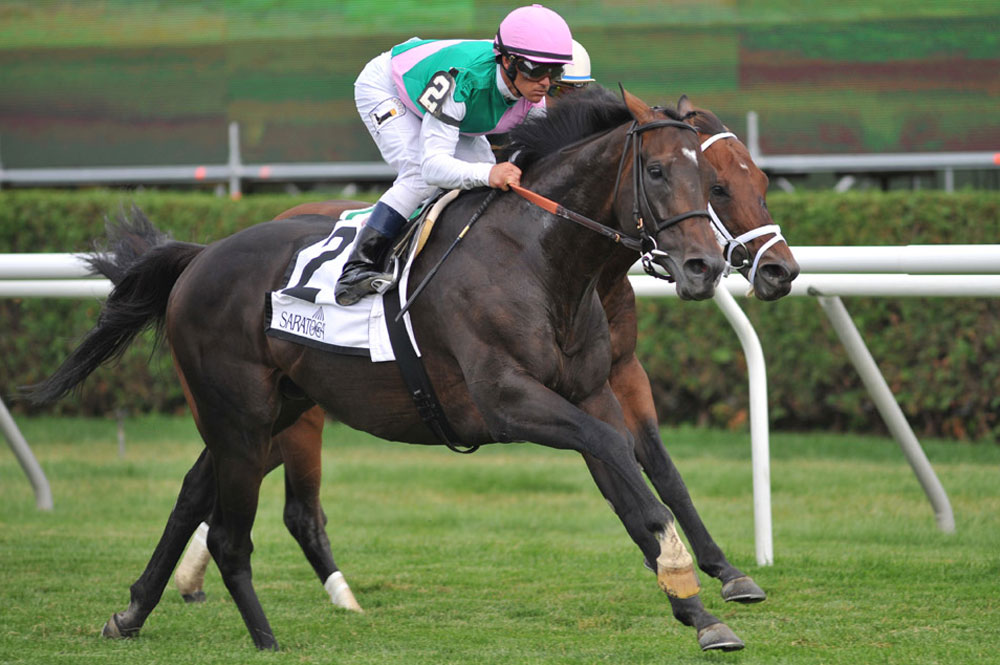 Heading into Saturday's GI Longines Sword Dancer Invitational S., bad luck was, for all intents and purposes, the only true opponent facing Juddmonte Farm's Flintshire (GB) (Dansili {GB}). Off at 20 cents on the dollar while in search of a fourth consecutive win on these shores and looking to successfully defend his Sword Dancer title, the 6-year-old was given a daring hedge-clipping trip by Javier Castellano, was able to squeeze through that slimmest of openings inside of his rabbit Inordinate (Harlan's Holiday) in upper stretch and streaked home to defeat stablemate Money Multiplier (Lookin at Lucky) by 1 3/4 lengths. For the third straight year, Twilight Eclipse (Purim) rounded out the Sword Dancer trifecta. “I've never seen anything like him outside of Lady Eli. He's the greatest horse I've ever seen,” enthused trainer Chad Brown. “He came to me a great racehorse. I just try to keep him happy and healthy. Give credit to my team. They have kept him in top form.”

Runner-up to Main Sequence (Aldebaran) in the 2014 GI Breeders' Cup Turf, Flintshire had something of a tough-luck season in 2015, with his eyecatching victory in this event his lone trip to the winner's circle. Returning to then-trainer Andre Fabre's French headquarters, the dark bay filled the runner-up spot in the G1 Prix de l'Arc de Triomphe for the second straight season and passed on the GI Breeders' Cup Turf owing to concerns over easy ground in Lexington. Connections ultimately ruled out an appearance in the G1 Japan Cup and pointed instead for a defense of his title in the G1 Longines Hong Kong Cup, but Vincent Cheminaud was outfoxed by Ryan Moore and Highland Reel (Ire) (Galileo {Ire}). Returned stateside for the duration this time around, Flintshire resumed in the GI Woodford Reserve Manhattan S. June 11over a 10-furlong trip many thought was too sharp. With a final two-furlong clocking of :21.49, he silenced those contrarians with a 1 3/4-length tally and he most recently rallied off no pace whatsoever in the GII Bowling Green S. to best Grand Tito (Candy Ride {Arg}) by a 3/4-length margin that belied the superiority of the win.

Flintshire was immediately taken hold of by Castellano and switched off nicely at the tail as Inordinate was quarter-horsed along by Aaron Gryder to do the work for which he was enlisted and engaged Roman Approval (Roman Ruler) through lively splits of :23.18 and :46.16, fractions which were some seven seconds faster than those in the Bowling Green. Inordinate took them past midway in 1:11.04, and the first serious change in the plot came when Money Multiplier went for a middle move nearing the entrance to the last of the three turns. But that plan came unglued when he was forced to check repeatedly off the heels of Roman Approval and all the while, Flintshire was improving his position, even if Castellano was riding with crossed fingers. With a quick look over his left shoulder, Gryder knew he had a Ferrari on his bumper and was eager to evacuate the fast lane. In doing so, he bothered Roman Approval to his outside, but once the rail opened for Flintshire, he extended his stride, his big, round action carrying him to another breathtaking score. Money Multiplier ran with credit while never a real threat to the winner, just ahead of the gallant Twilight Eclipse in third.

“I am very lucky and fortunate,” Castellano commented. “The way I rode this horse, [I tried] to save some ground. Everyone ended up in the same position and I had to make my own decision and use my best judgment and it worked out. I was very lucky to go and cut through on the rail and accelerate. He is a phenomenal horse. I've never seen any horse with that much acceleration on the grass.”

Pedigree Notes:
By the sire of 2013 GI Breeders' Cup Filly & Mare Turf winner Dank (GB), Flintshire is out of the 2002 G1 Prix de Diane runner-up Dance Routine and is a full-brother to Dance Moves, a listed winner in France at 10 and 12 furlongs and third in the G2 Darley Prix Kergorlay going 15 panels. Like Dance Routine, Flintshire's second dam Apogee was a winner of the G3 Prix de Royaumont and produced MGSW Apsis (GB) (Barathea {Ire}) and SW & GSP Concentric (GB) (Sadler's Wells). Further down an impressive page is one-time Hong Kong Vase runner-up Spanish Moon (El Prado {Ire}), who one-upped Flintshire by winning the G1 Grand Prix de Saint-Cloud. Flintshire was second to Treve (Fr) in that event in 2015. Click for the free Equineline.com catalogue-style pedigree.