No Starlet But Monceaux Still Aiming For The Stars 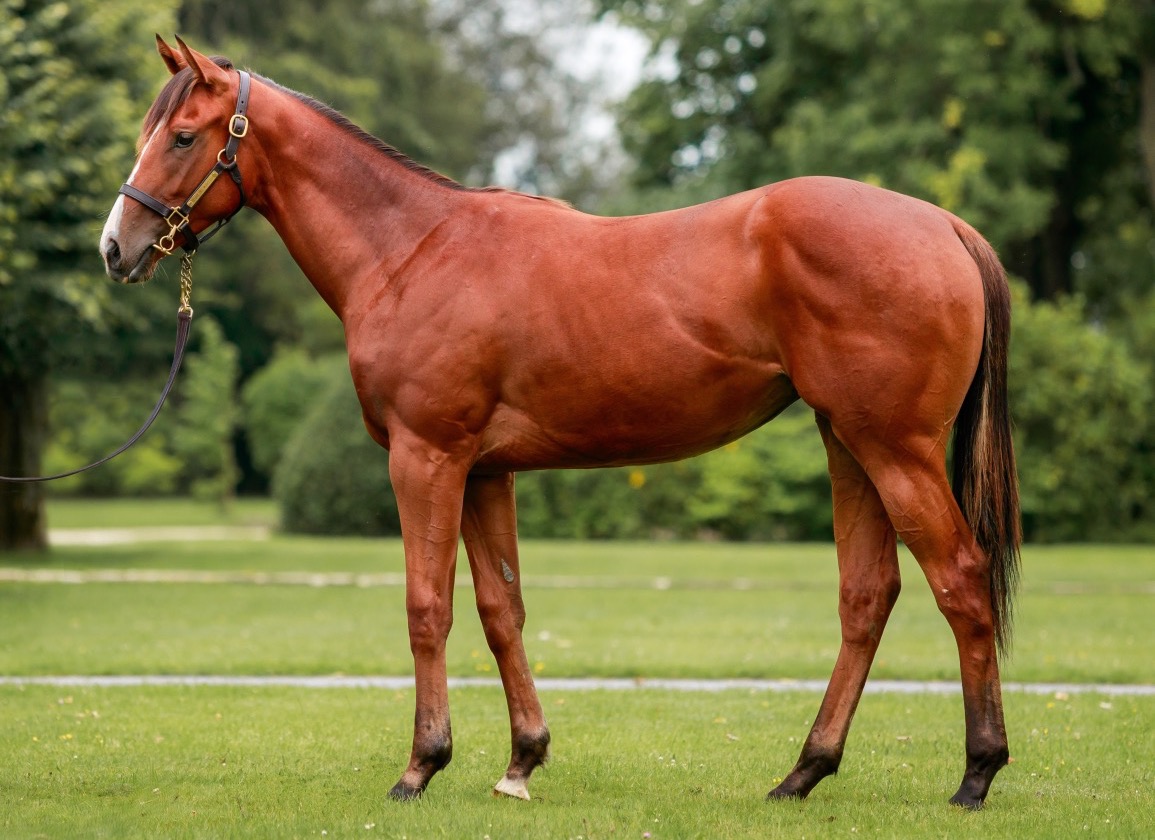 Since 2012, Ecurie des Monceaux has had a stranglehold of the top consignor spot at the Arqana August Yearling Sale. The only unusual thing about last year was the fact that the auction was not actually held in August, with Covid complications forcing it to be renamed the Select Sale and held in mid-September. Otherwise, it was business as usual for Henri Bozo and his team, who sold 32 yearlings for €10,682,000.

Almost a quarter of that sum was given for the Dubawi (Ire) filly out of one of Monceaux's crown jewels, Starlet's Sister (Ire) (Galileo {Ire}), who sold for €2.5 million to lead the sale and is now in training with Roger Varian for HH Shaikh Nasser Al Khalifa and KHK Racing. This time around there may be no starlet, but hopefully plenty of stars, as Monceaux has shipped in 38 yearlings from its Normandy base less than an hour from Arqana's Deauville sales complex.

“Everybody has asked me about Starlet's Sister's yearling but, obviously, for reasons that everybody can understand, we've decided to keep her,” says Bozo, who, despite having arguably one of the most stressful jobs in French bloodstock as his biggest week of the year approaches, does an exceptionally convincing impression of someone without a worry in the world.

He adds, “She's a really nice Dubawi filly, but it would be a huge professional error to sell this filly without having a sister to make sure the family is still in our hands, because all the fillies have been sold so far. They are all in the hands of Peter Brant, except the 2-year-old. We are really happy to keep this one.”

Perhaps we will see Starlet's Sister's current foal, a full-brother to last year's Arc winner Sottsass (Fr) (Siyouni {Fr}), at Arqana next August, but for now there are plenty of other youngsters worth perusing, including half-siblings to five Group/Grade 1 winners and the first yearling by Triple Crown winner Justify to be offered in Europe. In fact, as is to be expected at a select sale, the draft is replete with yearlings by some of the biggest stallion names in world breeding, including Galileo (Ire), Frankel (GB), Dubawi (Ire), Siyouni (Fr), Lope De Vega (Ire), Sea The Stars (Ire) and Medaglia d'Oro. That geographical spread also reflects the broad international client base of Ecurie des Monceaux, many of whom are in strategic partnerships which have flourished despite the fact that so many of us have been restricted to our own countries for much of the last 18 months.

Bozo says, “For the moment, it feels like we are back to normal, and I think that everybody is happy to get back to normal. Fortunately, our business has been pretty much the same. I mean, the only thing is that we have been travelling less so there has been less linking up with people. But from the technical point of view it has been exactly the same, and maybe even better because we have all been on the farm more and focusing on new projects or trying to improve things. But we meet fewer people, and I think everybody is quite impatient to travel a bit and meet people again.”

He continues, “I think it's a very positive aspect. It means that we are bringing more people in, and that can be people already in the business or people discovering the business. And I think, for everyone, it gives confidence to join with breeders and to be in partnership with others, to invest in a mare or to invest in yearlings, or to join the game. We now have a wide range of partners from America, China, Australia, England, Germany, Greece, and from France too. And I must say that it's very challenging. There is great input of ideas at the meetings, for the decisions, for everything, and I really enjoy it. It takes more time, of course, but it's interesting. And I think it's something that many French breeders share now.”

Sottsass and his half-sibling Sistercharlie (Ire) (Myboycharlie {Ire}) hog the top of the leader board on the Monceaux hall of fame with 11 Group/Grade 1 wins between them, but they are just two of nine top-flight winners to have emanated from the farm over the last decade. Another of those is the Prix Jean-Luc Lagardere winner National Defense (Ire) (Invincible Spirit {Fr}), the young Irish National Stud stallion who notched his first stakes winner at Deauville over the weekend with Twilight Gleaming (Ire). National Defense's half-sister by Siyouni is set to sell on Sunday as lot 133, and the family has received an extra boost this season as the filly shares her second dam Anna Palariva (Ire) (Caerleon) with the Derby and King George winner Adayar (Ire) (Frankel {GB}).

The aforementioned Justify filly, who appears during Saturday evening's opening session as lot 52, is the second foal of Media Mischief, an Into Mischief half-sister to Juddmonte's G1 Prix de Diane winner Nebraska Tornado (Storm Cat). In keeping with the heightened online information now provided by consignors in the wake of the pandemic, Monceaux has produced its own mini-catalogue which is available on its website and comes compete with handy annotated updates. In the case of this filly, potential buyers can instantly see that the mare's first foal is in training with Wesley Ward and her current foal is a colt by Siyouni.

Monceaux also consigns the sole yearling by another American-based sire at a more advanced stage of his career, Medaglia d'Oro. Lot 15 is the first foal of the listed-placed Golden Attitude (Redoute's Choice {Aus}), herself a daughter of G3 Prix Cleopatre winner Gold Round (Ire), a half-sister to champion miler Goldikova (Ire) (Anabaa).

“We have a mix, most of them by very proven sires, like Lope de Vega, who is a horse I love for his statistics at group level,” says Bozo. “We've got two very nice yearlings by Dubawi, who is an amazing stallion. We are very lucky to be able to use him. I'm very enthusiastic about the Medaglia d'Oro colt from the great family of Goldikova, and Medaglia d'Oro is such a good, tough sire.”

Another family which regularly features prominently in the Monceaux draft is that of Platonic (GB) (Zafonic), the grandam of Group 1 winners Chicquita (Ire) (Montjeu {Ire}) and Magic Wand (Ire) (Galileo {Ire}), both of whom are daughters of Prudenzia (GB) (Dansili {GB}). Two of the latter's sisters, Prudente (GB) (Dansili {GB}) and Pacifique (Ire) (Montjeu {Ire}) have yearlings in the forthcoming sale, with Prudente being represented by her Lope De Vega colt (lot 79) and Pacifique by a Kodiac (GB) filly (lot 70). The latter has already produced the Group 3 winner Paix (GB).

“Paix is by Muhaarar (GB) who is also a sprinting type,” says Bozo, explaining his decision to send the mare to Kodiac. “We wanted to bring a bit more power and maybe a bit more speed into the family. Pacifique is a nice, rangy mare with a great stride and we wanted to try to bring a bit of compactness to her.”

When Antoine Bellanger, Ecurie des Monceaux's yearling manager of 10 years, left to set up his own consigning business Arcadia Elevage, into his shoes last year stepped the youthful Jordan Tancrede.

“Jordan has been with us for nine years,” says Bozo. “He was a really young kid when he arrived and he looked like he was 10 years old. He arrived here one day with his parents and he told me, 'I love animals. I love horses, I love rabbits, I love any animal.' He had a really kind face and he learned to work here with our team. We soon found that he was not only a great horseman but also very good with people, very kind and gentle.”

Bozo arranged work for his protégé at studs in Australia, America and England to give him a better understanding of different regional practices within the industry.

He adds, “Then, he came back, and when Antoine started his own venture we decided to give a chance to Jordan, who has grown up a lot and now looks like he's 12 and a half. And I was honestly amazed by the way he handled the pressure, because, you can say whatever you like, you've got pressure when you bring yearlings to the sales. There is a lot of expectation for the owners, for everyone. He handles that very well and he's a real gentleman and horse lover who works really hard. And, like a rugby captain, he leads the team by his example.”

Tancrede is actually now 24, which is still a very young age to hold such a position of responsibility on a major stud farm, but his approach to his job displays a maturity beyond his years.

Heading into his second August Sale at the helm of the yearling team after topping last year's auction, Tancrede says, “I'm not nervous. I can't explain that, but you need to stay focused on the programme. And if I stay focused, all the team is going to stay focused as well.”

He continues, “For me it starts with the animal. I love all animals, definitely the horses, and I love caring for them. Sometimes the job can be a bit difficult, like in the winter when we got a lot of bad weather, but that's also the time when we can make all the difference because every day we bring the horses inside. We don't leave them all out in the fields. And every day when we bring the horses in, we handle them, we checks their legs. All the details are very important.”

Those details are constantly logged and programmes adjusted to suit the individual, especially when the countdown to the sales begins through the formal prep.

“They change a lot during that time,” Tancrede explains. “Every week we have a meeting and we check the feed, the care, note if a horse has any problems. They are all different, so we need to keep data for every horse and change the programme slightly, horse by horse.”