Home » Archive » Europe » No News Is Good News At Arqana

No News Is Good News At Arqana 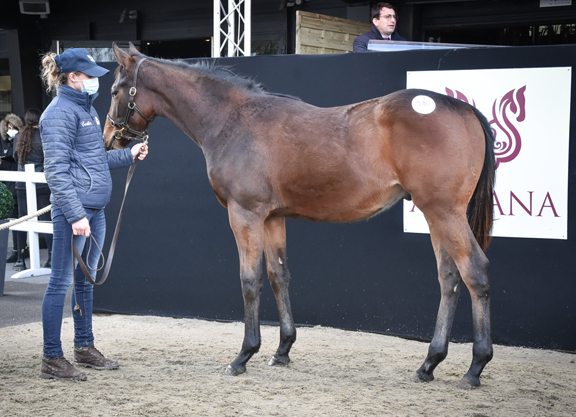 Arqana concluded its trade this week with a single session of National Hunt breeding stock, which had been moved from the December Sale to allow for shorter sessions while Covid-related restrictions remain in place.

The 10-year-old mare No News (Fr) (Gentlewave {Ger}), sold as part of the dispersal of stock from Haras de la Croix Sonnet, was the leading light of the sale, selling for €125,000 to Haras des Sablonnets. From the celebrated dual-purpose family which includes the highly sought-after jumps stallion No Risk At All (Fr), the mare (lot 918) was sold in foal to Goliath Du Berlais (Fr), a son of Saints Des Saints (Fr) who joined his father on the roster of Haras d'Etreham's National Hunt wing Haras de la Tuilerie this year.

This year's foal out of No News, from the first crop of Cloth Of Stars (Ire), was one of the bestsellers among the weanlings at the sale. She fetched €60,000 as lot 923 and the only foal to sell for more than this was also from the first crop of the Haras du Logis stallion. Sold as lot 910, the Cloth Of Stars half-brother to recent GI-winning hurdler Theleme (Fr) (Sidestep {Aus}) fetched €75,000 and was knocked down to Saubouas Bloodstock. They were the only two lots by G1 Prix Ganay winner Cloth Of Stars in the sale; another six will be offered at Arqana's December Sale.

Also popular among the mares was the classy Baie Des Iles (Fr) (Barastraight {Ire}), a seven-time winner in France and Ireland who was sold for €97,000 to Sebastian Desmontils of Chauvigny Global Equine form Haras du Hoguenet. The 9-year-old grey mare (lot 902) is in foal for the first time to leading French dual-purpose stallion Doctor Dino (Fr).

Princesse Kap (Fr) (Kapgarde {Fr}) also commanded a sales tag of €97,000 when sold to Tim Richardson's Equine Advisory Agency from Haras de l'Etoile du Berger. Like Baie Des Iles, Princesse Kap won the G2 Prix des Drags during her racing days along with another two Grade 3 contests among her nine victories. She was sold in foal to Haras de Montaigu resident No Risk At All, the sire of 2020 Champion Hurdle winner Epatante (Fr).

The sale concluded five days of trade at Arqana since Saturday, all of which have been conducted outdoors while France remains in lockdown. Of the 144 horses offered, 104 sold (72%) for an aggregate of €2,310,000. The average price was €22,212.