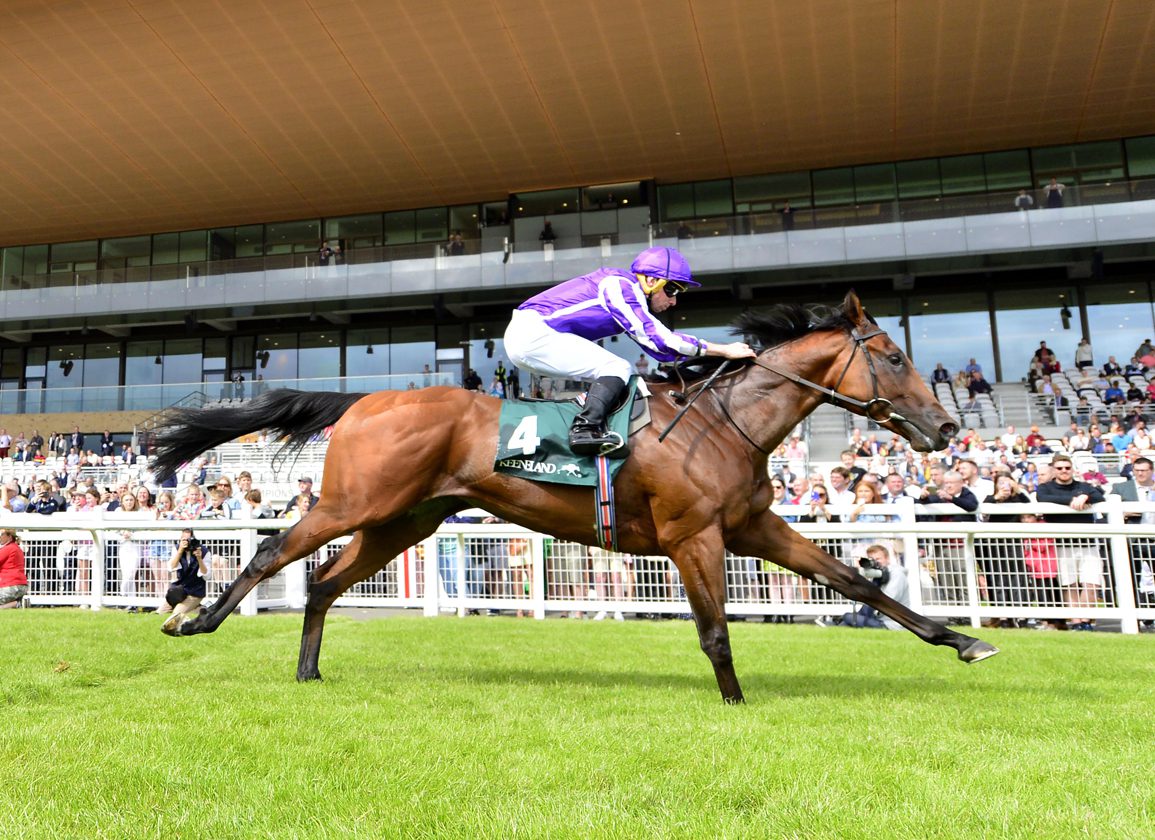 Not even favourite for Saturday's G1 Keeneland Phoenix S., it is no wild statement that TDN Rising Star Little Big Bear (Ire) (No Nay Never) could be the best juvenile Aidan O'Brien has had though his hands after a display of power to scintillate the Curragh faithful. Always in his comfort zone on the front under Ryan Moore as chief rival Bradsell (GB) (Tasleet {GB}) blew the start, the June 15 Listed Windsor Castle S. and July 16 G3 Anglesey S. winner was shaken up by Ryan Moore to put the seal on the race approaching the furlong pole. Surging away, the 13-8 second favourite issued a seven-length beating to Persian Force (Ire) (Mehmas {Ire}), with half a length back to Shartash (Ire) (Invincible Spirit {Ire}) and another length to the 11-8 market-leader Bradsell.

“He couldn't have been more impressive–he did everything beautifully today,” Moore said. “These looked good and had the form in the book, so it looked a strong race but he was on a different level. He gave me a super feel the last day, he felt really good and it's hard to know what he's going to do. He's very exciting–he's a big, scopey horse and it's a surprise he was beaten the first day, but that happens and he's stepped forward every time since. There's every chance he'll be a Guineas horse next year–he's very straightforward and is doing that on pure ability.”

“That was mightily impressive!”

An absolutely spectacular display from Little Big Bear in the @keeneland Phoenix Stakes @curraghrace – with Bradsell only fourth@coolmorestud | @Ballydoyle pic.twitter.com/43xQdmXjqJ

Very few juveniles are able to put such sizeable margins between them and their contemporaries over this sort of trip at this level, with the stable's George Washington (Ire) (Danehill) the last to do so when scoring by eight lengths in 2005 when there was another Coventry winner in Red Clubs (Ire) (Red Ransom) in opposition. The Juddmonte trio of superjuveniles Frankel (GB), Zafonic and Xaar (GB) were able to distance their rivals over further, but it takes something special to open up daylight at six furlongs especially when the line-up appeared so strong beforehand. Bradsell's sluggish start may have aided the winner's cause to a small degree, but there is nothing that can be subtracted from this vastly superior show of strength from Ballydoyle's new idol.

As much as Little Big Bear's wins at Naas and Royal Ascot marked him as above-average, perhaps the greatest early sign that he is held in the highest regard was the fact that connections were unwilling to risk him on fast ground at Newmarket's July Festival. Taken out of the G2 July S. ultimately won by Persian Force, the imposing bay came here to issue a warning that he could be a colossus in the Anglesey over 63 yards further and backed that up with this impressive production.

Whether Little Big Bear goes up in trip or down remains to be seen, but plans are elastic as O'Brien revealed after greeting his 17th Phoenix hero on a landmark day for the family as Joseph saddled his 1000th winner. “The lads can decide what they want to do. He has plenty of options and he can do anything I suppose,” he said of the G1 Nunthorpe S. and G1 Goffs Vincent O'Brien National S. entry. “He's a big, powerful, strong horse. He cruises and quickens, is strong and mature. Before the race we had a bit of a scare with him when he came up here. He kicked a wall and the clip of the shoe went into the sole of his foot. He was a little bit tender when the shoe was put back on. It could have gone either way very easily, so it was a great call by John Halley and Lynn Hillyer to let him run.”

“Ryan said when he let him go it was all over,” added O'Brien, who had earlier made way for Little Big Bear to be the sole representative by withdrawing Blackbeard (Ire) (No Nay Never). “He loves good ground so he can show his speed. It was a very good race, but he has serious class. From day one we thought he was a bit special and different. At Ascot we thought he would get away with five, even though we were happy going six with him. I'm not sure we ever had one to do that in this race. It was a deep field and we were going to find out today. Ryan was very complimentary about him and he's a realist, so there aren't many he would be that complimentary about.”