No Nay Never Gets First Winner in New York 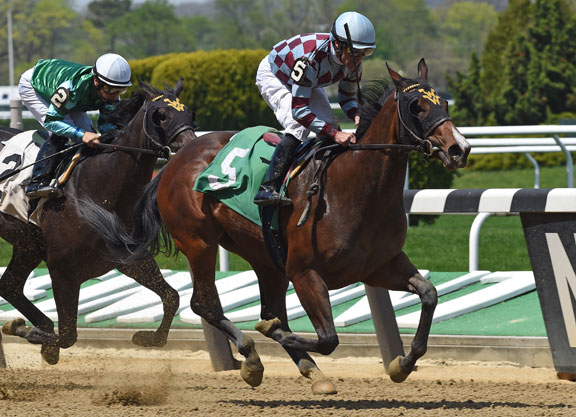 1st-BEL, $96,500, Msw, 5-3, 2yo, f, 5f, :58.65, ft.
MAE NEVER NO (IRE) (f, 2, No Nay Never–Sweet Shirley Mae {GISP, $219,808}, by Broken Vow) became the first winner for her freshman sire (by Scat Daddy), outfinishing her more fancied stable companion Abyssinian (Cairo Prince) to graduate by a 1 1/4 lengths at first asking Thursday at Belmont Park. Quickly away, the cold-on-the-board 17-2 chance was straightened out by Gary Stevens after drifting in a bit a stride or two out of the stalls, then settled in third as Abyssinian appeared to be coasting on an easy lead. The chalk drifted a bit wide into the stretch and Mae Never No began to cut into the advantage, grabbed the front-runner at the sixteenth pole and inched clear. Mae Never No’s sire raced for this breeder in partnership with Coolmore and annexed his career debut at Keeneland before adding the G2 Norfolk S. at Royal Ascot and the G1 Darley Prix Morny a few months later. Sparingly campaigned at three, No Nay Never won the GIII Woodford S. in between runner-up efforts in the GII Swale S. and in the GI Breeders’ Cup Turf Sprint. Mae Never No is the first foal for her dam, herself a debut winner at Belmont in 2012 for Ice Wine and subsequently second to So Many Ways (Sightseeing) in that year’s GI Spinaway S. and third in the Breeders’ Cup Juvenile Sprint. Sweet Shirley Mae, who foaled a full-brother to Mae No Never in 2017, was purchased by Breeze Easy for $225,000 in foal on a late April cover to Giant’s Causeway at last year’s FTKNOV sale. Lifetime Record: 1-1-0-0, $50,000. Click for the \fs21field or VIDEO, sponsored by Fasig-Tipton.
O/B-Ice Wine Stable (IRE); T-Wesley A Ward.