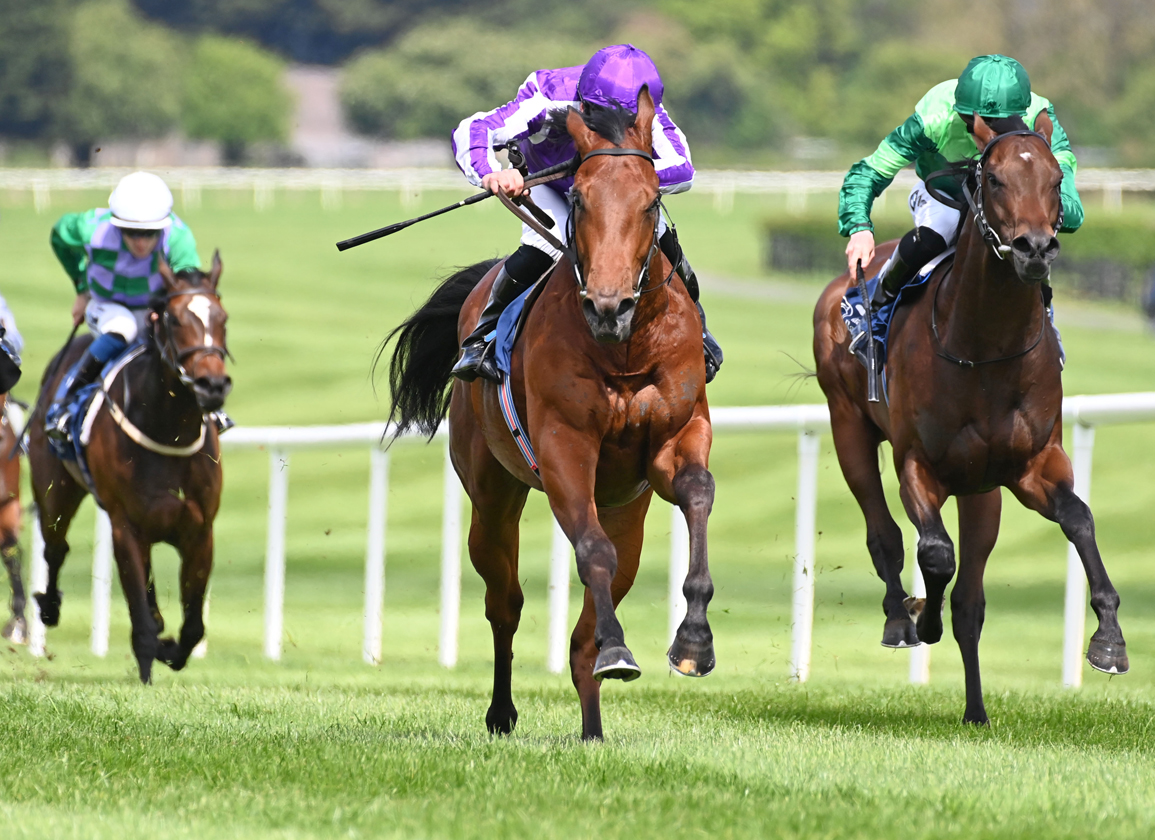 Aidan O'Brien's stable is going great guns at this fledgling stage of the season and there was another TDN Rising Star off the production line at Naas on Saturday as the 2-year-old Little Big Bear (Ire) (No Nay Never–Adventure Seeker {Fr}) booked his Royal Ascot ticket. Narrowly denied on debut by the Ger Lyons-trained Tough Talk (Ire) (Kingman {GB}) over six furlongs at The Curragh Apr. 10, the descendant of the legendary All Along (Fr) was backed down to 4-9 to deliver dropping to five for this Irish Stallion Farms EBF Maiden staged on yielding-to-soft. Always travelling like the winner in behind as the Joseph O'Brien-trained Alexis Zorba (GB) (Zoustar {Aus}) attempted to stretch him, the imposing bay who was a €320,000 Arqana Deauville August graduate was shaken up by Seamie Heffernan to take control inside the final furlong and register a three-length success without being fully extended. There was a further 3 3/4-length margin back to the Jessie Harrington-trained newcomer Keepupwithmyempire (Ire) (Holy Roman Emperor {Ire}) in third.

“He just outclassed them,” Heffernan said of the January-foaled bay, who was bred by Camas Park Stud and Summerhill and becomes his sire's third TDN Rising Star this term following the stable's fellow juveniles Deneuve (Ire) and Aesop's Fables (Ire). “He had a lovely run the first day, where he was a little bit green and he was one that caught my eye at home. He would be in the mix for Royal Ascot. He's a massive colt, he switches off and has loads of boot and a bit of class–he ticks a lot of boxes.”

Before this season, Ten Sovereigns (Ire) was the sole TDN Rising Star for the sire and he is still his best, but it is early days and the signals are strong that there is plenty to come from No Nay Never. Clearly Ballydoyle have some potentially high-class juveniles among his progeny in 2022 and Little Big Bear gives the impression he is one who is more than just a now horse given his impressive physique. Added to that, his pedigree is not one of a fast and precocious sprinter as his dam Adventure Seeker was a middle-distance performer for the Wildensteins and Alain de Royer-Dupre, winning the 10 1/2-furlong Listed Prix de Liancourt and placing second in the G3 Prix Cleopatre and fourth in the 2011 GI E P Taylor S.

Adventure Seeker, whose yearling is a full-brother to the winner, has thrown one previous stakes performer with her first foal being Andrea Mantegna (Giant's Causeway) who was second in the 12-furlong G3 Hobart Cup, GSP-Aus, $352,585. A half to the precocious but ill-fated G3 Princess Margaret S. third Along Again (Ire) (Elusive City), she is a granddaughter of the aforementioned All Along, the French champion and US Horse of the Year in 1983 courtesy of her G1 Prix de l'Arc de Triomphe, GI Turf Classic, G1 Rothmans International and GI Washington D. C. International victories.