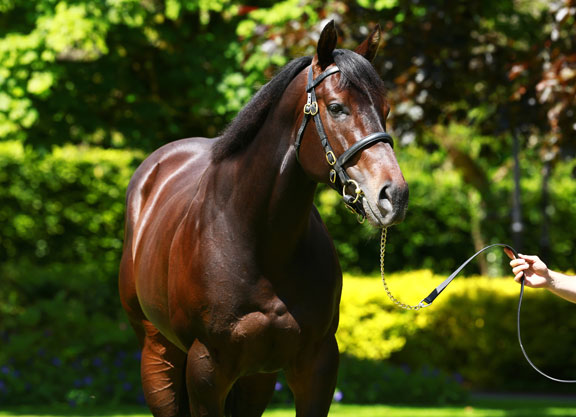 By the time he made his second start at two, No Nay Never (Scat Daddy) had already established himself as a transatlantic success, breaking his maiden at Keeneland on the dirt, and winning the G2 Norfolk S. at Royal Ascot in his next outing. By the time he won the G1 Prix Morny at Deauville two months later, his quality and versatility was well-established. No Nay Never has gotten off to a similarly strong start in the breeding shed as well, finishing the year as Europe’s top first-crop sire with a Group 1 winner in Ten Sovereigns (Ire). We caught up with Coolmore Ireland’s Director of Sales David O’Loughlin to talk about the Kentucky -bred’s universal appeal.

TDN: How did Coolmore first get involved with No Nay Never?

DO: No Nay Never was pinhooked by Paul Shanahan and Timmy Hyde as a foal and they brought him to Keeneland September, and Wesley Ward bought him for Ice Wine Stable. They retained a piece of him from the sale, so there was always a Coolmore connection to the horse. Wesley let the guys know very early on as a 2-year-old that this horse was special, that he was showing an awful lot. He won at Keeneland in April and he came on to Ascot then for the Norfolk S., which he won in blistering style over five furlongs. He destroyed the field. He went on then to Deauville for the Prix Morny, which is the premier French juvenile race over six furlongs. The great debate that morning was the ground because there was a lot of rain over in Deauville that weekend, and Wesley was very worried about running him. After much reflection and a little push from Paul Shanahan, he ran the horse and again he destroyed the field. He was very impressive and Wesley gave him a break after that, and he didn’t run again as a 2-year-old.

TDN: How important is that crossover appeal to a stallion today?

DO: Look, he’s typical of what’s happening in the world now. He’s an international horse: he ran on dirt, he ran on Polytrack and he ran on grass. He ran on two continents, and that’s the way our world is going now. There’s more and more international racing, and he’s thriving on it. His first crop has just turned three, but he’s had runners and stakes horses on all the surfaces already. They’ve done well in Europe on turf and poly and they’ve done well in America. I’d envision that’s the way it’s going to be. He’s an international horse. [Scat Daddy’s death] was such a loss to us and most Europeans have only woken up to Scat Daddy in the last few years, but it’s amazing how fast they are, and how suited to turf racing they are, as well as dirt. He got Justify, obviously, but he gives all the options.

TDN: Why was the decision taken to stand him here in Ireland rather than in America?

DO: His best form was in Europe at the Prix Morny and at Ascot, and we didn’t have a son of Scat Daddy so I suppose that’s why we came this way, but it’s a small world now. We can move horses between the continents. I remember when Scat Daddy died there was discussion of whether we should move No Nay Never to America then, but we kept him here thankfully, and he couldn’t have done much better with his first crop: six stakes winners, 14 black-type horses. He’s sired the best 2-year-old colt in Europe, the fastest anyway, in Ten Sovereigns. He’s undefeated and he’s either going to go to the Guineas or go to the Commonwealth Cup at Ascot, go the sprinting route. Aidan will decide that in the next few weeks. It was incredible that he won a maiden, a Group 3, and a Group 1 in just over a month. It’s a very hard thing to do; it’ll take a special horse to do that.

TDN: As you said, his first crop was so successful; he led the list in almost every category in North America and Europe. What do you expect from his 3-year-olds?

DO: He trained on himself; he ran [second] in the [GII] Swale S. at Gulfstream. As a 3-year-old, he had a little knock coming out of that, but he came back in the autumn and he won at Keeneland very impressively [in the GIII Woodford S.]. He went on to the [GI] Breeders’ Cup Turf Sprint, and he was just run out of it [when second]. He was a little bit unlucky; a horse came on the other side of the track he wasn’t aware of, and he would’ve thought he won the race. So he did train on, and he’s a big scopey horse, and he gets big scopey horses. No Nay Never is very typical of Scat Daddy and his progeny are very much in that mold, and with the variety of mares you got over here [in Europe]–he would’ve got a lot of Danehill-line mares, a lot of Sadler’s Wells-line mares, so we would expect that to be a factor in them training on, too. We’re sitting here now in the first week in March but he’s had a very, very impressive winner in Dubai already, couldn’t have won any better, so all the signs are he’s on for a great year.

TDN: What is he like physically, and what sort of mare does he work best with?

DO: A lot of breeders who saw him at the races would remember that he’s a particularly big 2-year-old. He’s probably fully grown at two, he’s about 16.1. He looked all of it if not more as a 2-year-old, but he’s filled out. He has a great hind part to him, great hind leg. Good front legs, he’s a lot of quality, and a lovely dark color. He’s nearly black. He’s a very attractive horse, and he’s always been an easy horse to sell in the yard. [His progeny] are pretty much peas in a pod–the size, scope, strength. Good movers, plenty of quality. He’s been an easy horse to sell all along; pedigree-wise he’s a very interesting horse for European breeders in particular because he’s a cross for Danehill and Sadler’s Wells-line mares, and so many of the mares in these parts are bred that way and already an awful lot of his good horses are out of Danzig-line mares. It’s early days, and I think we’ll learn a lot more in the next year or two. He couldn’t have made a better start, he’s €100, 000 and he’s booked out. He was standing here for €17,500 for his first three seasons, so he’s made a huge leap and he’s getting a fantastic book of mares in his fifth crop. Nearly all of the leading breeders in Europe are using him. So it’s going to be interesting to see how he does with the more Classic-type mares.