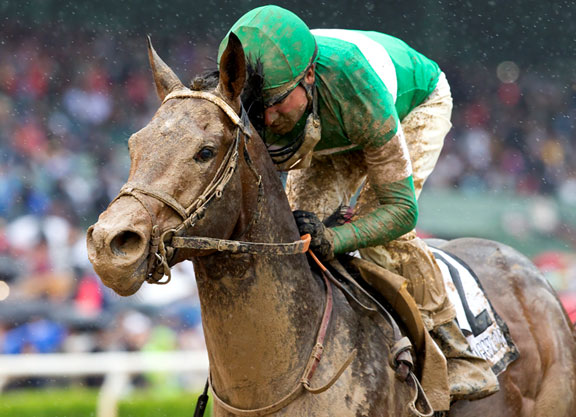 Runner-up to champion Nyquist (Uncle Mo) on his seasonal debut in the GII San Vicente S. over seven furlongs, Exaggerator (Curlin) was at least a little disappointing when failing to build on that effort behind Danzing Candy (Twirling Candy) in the GII San Felipe S. Mar. 12. There were no such missteps Saturday, as the dark bay came with a prolonged run for a visually impressive 6 1/4-length tally in the GI Santa Anita Derby.

A maiden winner at second asking at Del Mar last July, Exaggerator was audaciously sent cross-country, and, on just 22 days’ rest, overcame traffic trouble in the stretch for a slashing victory in the GII Saratoga Special S. at Saratoga Aug. 16. Second as the favorite to Brody’s Cause (Giant’s Causeway) in the GI Claiborne Breeders’ Futurity at Keeneland Oct. 3, the $110,000 Keeneland September graduate was fourth as the 9-2 joint second favorite in the GI Breeders’ Cup Juvenile Oct. 31 and handled a muddy and sealed Delta main track with aplomb to best the talented Sunny Ridge (Holy Bull) by a neck in the GIII Delta Jackpot S. Nov. 21. Exaggerator made a menacing bid in his return to action in the GII San Vicente S. at this track Feb. 15, but was forced to settle for second behind Nyquist and he mystified the Desormeaux duo when only third to Danzing Candy (Twirling Candy) and Mor Spirit in the GII San Felipe S. Mar. 12 after looking every bit a winner at the head of the stretch.

Danzing Candy was edgy in the stalls, delaying the start fractionally, and Mike Smith gave him a dig right at the break to ensure that the free-running colt secured the lead. It was mission accomplished, to an extent, as the homebred made the front, but by this point was hard against the steel and carved out an opening quarter-mile in :22.15 and a half in :45.24. Uncle Lino tracked outside from third, while Mor Spirit enjoyed the run of the race back on the rail from fourth and Exaggerator was patiently handled by Kent Desormeaux two from the tail in seventh.

Danzing Candy saw his lead whittled to a little more than a length as they approached the entrance to the second turn, but by this point, Desormeaux had clicked up Exaggerator and the duo began to creep closer to the main body of the field. He found yet another gear passing the three-eighths marker and in a move reminiscent of Texas Red (Afleet Alex)’s in the 2014 GI Breeders’ Cup Juvenile, circled past rivals as if they were standing still. Uncle Lino edged past Danzing Candy for a split second, but Exaggerator soon descended upon them and splashed away to the most visually impressive win in the afternoon’s three Derby preps.

“He’s that caliber of horse and it’s extra special to be with Keith, and we don’t even talk too much, it’s all quite understood,” said Kent Desormeaux, a three-time winner of the Kentucky Derby. “All he said in the paddock was, ‘Kent, I’m telling you that I’ve never seen this horse so confident.’ When I galloped off once I was on the track, he took to the track like a duck to water. He never missed a beat and he showed it winning today.”

The connections of the second and fourth home hinted that the underfoot conditions contributed to the horses’ respective performances.

“We got hit by the first wave of water and mud going into the first turn, he slipped with me and started lunging,” said Mor Spirit’s rider Gary Stevens. “He came off the bridle, and the first thing I said was, ‘This is going to be a long race.’ When Kent came by me, he actually tried to go with him–he sort of re-ignited again, but he sort of just looked after himself. I’m real proud of him to run second.”

Of Danzing Candy, Mike Smith opined, “I was hoping he’d really take to the mud, to be honest with you, as long as I had him up underneath me he was okay but as soon as I had to let up and run along I felt like I was on roller skates out there. He just didn’t grab quite a hold of it the way we hoped.”

Produced by a half-sister to the dam of Sovereign Award winner Embur’s Song (Unbridled’s Song), Exaggerator is a half-brother to a 2-year-old Pioneerof the Nile filly now named Rose Garden. Dawn Raid, bought back on a bid of $625,000 at last year’s Fasig-Tipton November mixed sale, produced a full-sister to Exaggerator this winter.