Home » Archive » Shared News » No Cover Up in Mongolian Groom Case, But Missed Opportunities to Scratch Him

No Cover Up in Mongolian Groom Case, But Missed Opportunities to Scratch Him 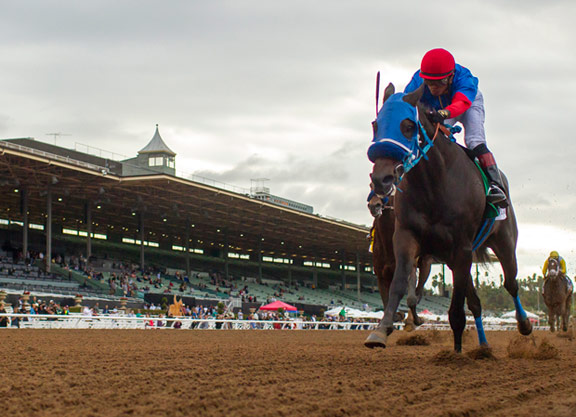 A Breeders' Cup-commissioned evaluation of the catastrophic injury that led to the euthanization of Mongolian Groom (Hightail) in the GI Classic has concluded that the gelding had small, pre-existing stress fractures in both hind cannon bones, and that when the one in his left hind displaced during the race, it created chain-reaction downward force that acted “as a screwdriver” to apply “a huge amount of torque to the bone,” causing multiple fractures in that leg.

The 25-page report, released Wednesday by the Breeders' Cup and authored by internationally recognized equine orthopedic surgeon Dr. Larry Bramlage, further concluded that Mongolian Groom was clean from prohibited substances in both pre-race testing post-injury toxicology screenings (other than sedation he received immediately after his injury). The evaluation also declared that “it is unlikely that the [Santa Anita Park] racetrack had an acute influence on Mongolian Groom's injury.”

Bramlage wrote that “there is no evidence that the horse's injury was ignored or covered up” in pre-competition veterinary exams. He noted that the gelding was examined “by five different veterinarians on five different days on the track, and at the barn by three different veterinarians on six different days pre-race, with one exam also including trotting on a hard surface to accentuate any lameness…. No clear-cut lameness was noted in any of the barn exams, including the morning of the race.”

By way of comparison, Bramlage wrote in his report that 73 out of 253 Breeders' Cup entrants were tagged for a “watch list” during the 2019 championships. Within that number, Mongolian Groom was one of a subset of 24 horses selected for “extra scrutiny” in the form of additional barn examinations.

“Of those 24 horses, eight were disqualified from competition,” Bramlage wrote. “Five horses on the undercard were also disqualified. In all, 24 horses were withdrawn or disqualified from competition in the two days of the 2019 championships…. There were 17 horses who competed that had comments that they were 'short,' 'choppy' or 'stiff' behind on the pre-race barn examinations. Sixteen of those horses ran without incident. The examining veterinarians made the right call on 252 horses…. The decision was wrong on only one horse: Mongolian Groom.”

But still, Bramlage concluded, the vetting process could have been better, and needs to be improved for future runnings of the Breeders' Cup.

“It is hard to fault a process that had a 99.6% accuracy rate, but there were opportunities to remove Mongolian Groom from competition that were missed due to time constraints or process deficiencies that could be made more prominent,” Bramlage wrote.

“In my opinion the key opportunities for process improvement are to improve the quality of the on-track observations and to introduce the ability to jog horses in need of 'extra scrutiny' in circles at some safe location on the back side of the racetrack,” Bramlage wrote. “This should help separate the significantly lame horses from the horses that have routine soreness. It would also create the threshold for requesting radiographic or ultrasonographic imaging prior to clearance for competition for horses of concern.

“The advantageous use of video footage of horses training prior to the event as part of the routine veterinary examinations should also help select horses for 'extra scrutiny,'” Bramlage continued. “All three of these processes' improvements would likely have helped clarify Mongolian Groom's status.”

How stress fractures led to fatality

Bramlage also compared enlarged x-rays of Mongolian Groom's right cannon bone to the catastrophically injured left one to determine that the right one showed a bruised area of bone “in the same location where the fracture initiated in the left hind limb.”

He described this finding as representative of “how the same process of wear and tear often occurs in both hind limbs (or in some horses both front limbs) at the same time. Both limbs gradually get behind in the overload/over repair process of training and racing and structural damage begins to accumulate entirely within the bone with no outward sign of inflammation.”

“This explains why Mongolian Groom was short in both hind limbs, not in one hind, when examined in the barn; because he had small areas of accumulated damage in both hinds,” Bramlage wrote.

Bramlage noted that the defect in the right cannon bone was only a quarter-inch in size, and that such stress defects are “not easily documented radiographically until late in the process. So it takes a combination of lameness identification and then radiographic documentation to make this diagnosis. It is not an easy task at any time, but is especially difficult in the circumstances of a pre-race examination.”

These stress fractures, he wrote, “were in the depths of the bone, yet as of the start of the race had not caused any inflammation in the fetlock joint even though they were just millimeters away from the joint surface. A little more than one mile into the race the left hind fracture propagated, resulting in the chain of events, like dominoes falling, that created the fatal injury.

“The stress fracture was the result of accumulated bruising of the distal cannon bone which resulted in the stress fracture,” Bramlage continued. “The horse was unaware it was even there during the race. As superior athletes can, his adrenaline levels wiped out any impediments to performance. He was well into the race, competing similarly to how he normally runs, just off of but near the lead. The race was one of the faster of the day and he was third as they exited the turn when the injury occurred. His jockey saw no reason for concern until the first fracture displaced.”

Bramlage wrote that a record of previous exam notes by regulatory veterinarians is kept in The Jockey Club's nationwide InCompass database. Mongolian Groom's InCompass reports showed “notations of decreased range of motion in the front fetlocks for all 19 of his races—they were not concerning and were only of note because of their variation from normal.

“The hind fetlocks are noted as normal or unremarkable in all examinations,” Bramlage continued. “His motion exams identified no lameness at the pre-race barn exams in any of his races, just stiffness in motion. The truth is he had a bilateral lameness and remained symmetrical in both hind limbs in the barn exams before the 2019 championships. But this was similar to his previous recent pre-race exams when he won.”

During the week of the Classic, Bramlage wrote, both of Mongolian Groom's hind fetlocks “had been flexed with no increase in lameness noted. No clear-cut lameness was noted in any of the barn exams, including the morning of the race. His exam was further complicated by the fact that his racing form continued to improve all year long including an upset victory in the [GI] Awesome Again S., the race before the Breeders' Cup, but the pre-race exams remained basically the same.

Bramlage continued: “This degree of familiarity with the horse may actually have impeded a more critical assessment of Mongolian Groom since he had looked the same on repeated routine 'in barn, pre-race' examinations covering months of training and racing…. The evaluators' assessment of the 'in barn' examinations did not raise enough concern to reach the threshold for requiring radiographs of any of his joints.”

Such stress fractures within the cannon bone can be so small, Bramlage wrote, that they show “no outward physical signs, pain on palpation, heat, or swelling.” In a “normal situation” these micro-fractures “are repaired between exercise sessions. But if they begin to accumulate faster than the repair process can manage, a stress fracture occurs. Fortunately, in the vast majority of instances the stress fracture propagates a little at a time and detectable lameness appears before the creation of instability of the joint…. But Mongolian Groom's fracture propagated through the bone rapidly creating a complete fracture while the horse was in full competition.”

Beyond Mongolian Groom's clean drug tests, Bramlage wrote that “his medication record shows no intra-articular medication of the fetlock joints, ever. His hock joints had been treated with anti-inflammatories Oct. 19, after his last race, but well before the systemic clearance time before the Breeders' Cup. He was treated for muscle soreness of his back after his last work on Oct. 27, when his saddle slipped, with the consultation of the regulatory veterinarian and his attending veterinarian. He received a muscle relaxant (methocarbamol), a balanced electrolyte paste orally, and acupuncture to resolve his muscle soreness. But the hind fetlocks had no treatment.

“There is no reason to believe medication played any role in the horse's injury,” Bramlage concluded. “The problem was the stress fracture that escaped identification, but not because it or the affected joint had been treated in any fashion.”

With regard to the decision to euthanize Mongolian Groom, Bramlage wrote that “this degree of injury leaves nothing to re-construct effectively enough to enable weight bearing on the limb…. The decision for humane euthanasia for this injury was the right one.”

Better imaging not always the answer

“Numerous people and authors have questioned why all the horses in the Breeders' Cup Championships are not routinely imaged to assess their skeletal health,” Bramlage wrote. “There have been calls for digital radiographs, nuclear scintigraphs (bone scan), standing Magnetic Resonance Imaging (MRI), and now possibly the newly developed Positron Emission Tomography (PET) scan of all participants.

“What one has to understand is that images provide information but are never a 'lameness meter,' Bramlage explained. “Many radiographic findings are innocuous and many important lesions are easily missed on surveys. The first issue is there would be no time to image even a limited number of joints in each of the entrants if it were done by Breeders' Cup. And then you would need someone to read them all, which would also be problematic.

“You could require the attending veterinarian to image the entrant, but they are already required to submit a report stating that in their opinion the horse is ready to compete,” Bramlage continued. “But the most difficult problem is that most horses don't have perfect skeletons and many innocuous lesions would be uncovered and cause false positive findings that would have to be assessed.

“In addition, many important lesions such as those in Mongolian Groom's hind cannon bones are not easy to find. They can be missed if exactly the right radiographic projection is not acquired. It often takes a combination of imaging (e.g. bone scan plus radiographs) to define a bone lesion.”

Bramlage wrote that “standing MRI images are low-field (low power), very time consuming to acquire and, unlike a high-field MRI, which is what is used on people, sometimes produce false negative or equivocal results. Plus, he noted, “high-field MRI requires general anesthesia in the horse so that is not an option for screening.

“Standing CAT scans hold promise, but the ideal machine is yet to be produced for routine practical use,” Bramlage wrote. “The new PET images are also promising but…still not perfected.”

Bramlage summed up the overall veterinary process as it applies to future Breeders' Cups.

“Since we are dealing with biologic beings and not inert machines, we will never eliminate every opportunity for an occult injury to manifest and will never reach 100% accuracy,” he wrote. “But improvement in process should make us better next year than this year and continual refinement should yield even better results the year after that. The process was good; it can be made a little better with some re-organization.”