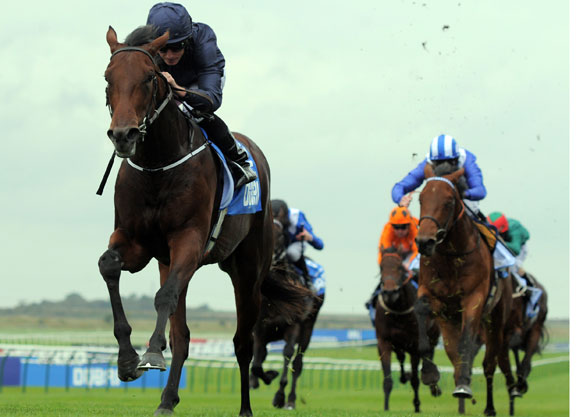 FULL FORCE
Although he had little to prove after impressive wins in the The Curragh's G1 Keeneland Phoenix S. and G1 Goffs Vincent O'Brien National S., Air Force Blue (War Front) only served to enhance his considerable reputation by powering away with Newmarket's G1 Dubai Dewhurst S. on Saturday. Always traveling easily tracking compatriot Sanus Per Aquam (Ire) (Teofilo {Ire}), the heavily supported 4-6 favorite was sent to the front approaching the furlong pole and responded generously to Ryan Moore's urgings to register an emphatic 3 1/4-length verdict over Massaat (Ire) (Teofilo {Ire}) as Godolphin's Emotionless (Ire) (Shamardal) proved a disappointment finishing last of the seven runners. “He felt exceptional,” jockey Ryan Moore said. “He has really progressed and he stands out compared to the colts. I'd say that would be the best performance by a 2-year-old this year. He felt like there is more to come and he's a big horse who is still filling that frame.”

While Aidan O'Brien was attempting to keep a check on his enthusiasm after Air Force Blue's latest win in the National S. Sept. 13, the Ballydoyle conditioner let out enough to suggest that he could be something special. Taken to Royal Ascot on the back of his six-furlong maiden win on debut at The Curragh May 24, the bay ran up to standard in the June 16 G2 Coventry S. without having the streetwise element required to deny Buratino (Ire) (Exceed and Excel {Aus}) there but had that rival back in third when showing his true mettle in the Phoenix over that trip Aug. 9. Looking more accomplished when handing Herald the Dawn (Ire) (New Approach {Ire}) a three-length beating without being extended in the National, he came here to do what none of the stable's previous Phoenix-National double achievers One Cool Cat, George Washington (Ire) and Mastercraftsman (Ire) had been asked to do by adding this to his tally. Settled behind Sanus Per Aquam with William Buick keeping him in his sights on Emotionless, the trio stayed away from the other four fronted by the overall leader Adventurous (Ire) (Invincible Spirit {Ire}). With the Godolphin hope looking in trouble passing the quarter pole, it was Air Force Blue who asserted his superiority soon after and the way he left Massaat in his wake left the bookmakers scurrying for cover as they pondered his odds for next year's 2000 Guineas. If he was reticent after the colt's last win, Aidan O'Brien was not holding back this time. “Joseph said after the National S. that he'd never ridden a better horse and even in February and March he was galloping all over horses he shouldn't have been able to in very soft ground, so obviously he just has a big Rolls Royce engine,” he said. After Minding had won the Fillies' Mile on Friday, Ryan came in and said he'd ridden nothing like her all year but she would probably only lead this horse halfway up the gallops in work. He was a baby early on and I would say no doubt he's the best two-year-old I've had. Fast ground is ideal and we were very worried last time at The Curragh, but the boys let him run so see what would happen. His pace, size and scope and how he goes through a race makes him exceptional and very exciting. I couldn't see him getting any further than a mile and I was worried about him getting seven. He has sprinting speed, but size and range and is very genuine and just wants to give it.” Soon-to-be-retired Barry Hills was delighted with the performance of Massaat and said, “Things have not gone his way. He coughed after his first run and he missed a month through that. He ran at Leceister and probably didn't learn much there and we were up against a horse who had already won two Group Ones.” Charlie Appleby remained upbeat about the future for Emotionless, who never looked happy in contrast to his impressive win in the G2 Champagne S. “William [Buick] just said it was a different pace of a race,” he explained. “As we have said all along, he is one for the future and he's ridden as if he's a bit weak. We will now put him away, as we always intended to do, and let him furnish over the winter and see where we are in the spring. He's a big-framed horse and hopefully he will strengthen into that frame over the winter.”