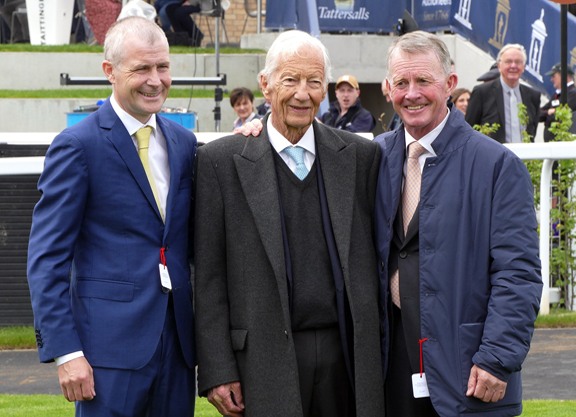 British Triple Crown hero Nijinsky II (Northern Dancer) won the King George VI & Queen Elizabeth S. 50 years ago this year, and was awarded the QIPCO Diamonds & Pearls award, Ascot Racecourse and QIPCO announced on Thursday. The award celebrates the winner of a vintage renewal of the King George. Owned by Charles W. Engelhard, Jr. and trained by Vincent O'Brien, the bay delivered as the only 3-year-old in the field, having already claimed victory in the 2000 Guineas, Epsom Derby and Irish Derby. After his King George triumph, he would add the St Leger and become the last British Triple Crown winner to date. At stud, he sired 155 black-type winners, including G1 Epsom Derby winner Shahrastani and GI Kentucky Derby hero Ferdinand in the same year, 1986.

“I am delighted to receive the QIPCO Diamonds and Pearls award,” said Nijinsky II's former jockey Lester Piggott. Nijinsky was a wonderful horse and was unbeaten at the time. There was a lot of hype going into the King George–the opposition was decent, they were good horses, every one of them had a chance. You had all the best–obviously we thought he would win. He came to the other horses in the straight so easily, it was hard to believe really but he won in a canter. It was a wonderful win and was probably the best performance of his career.”