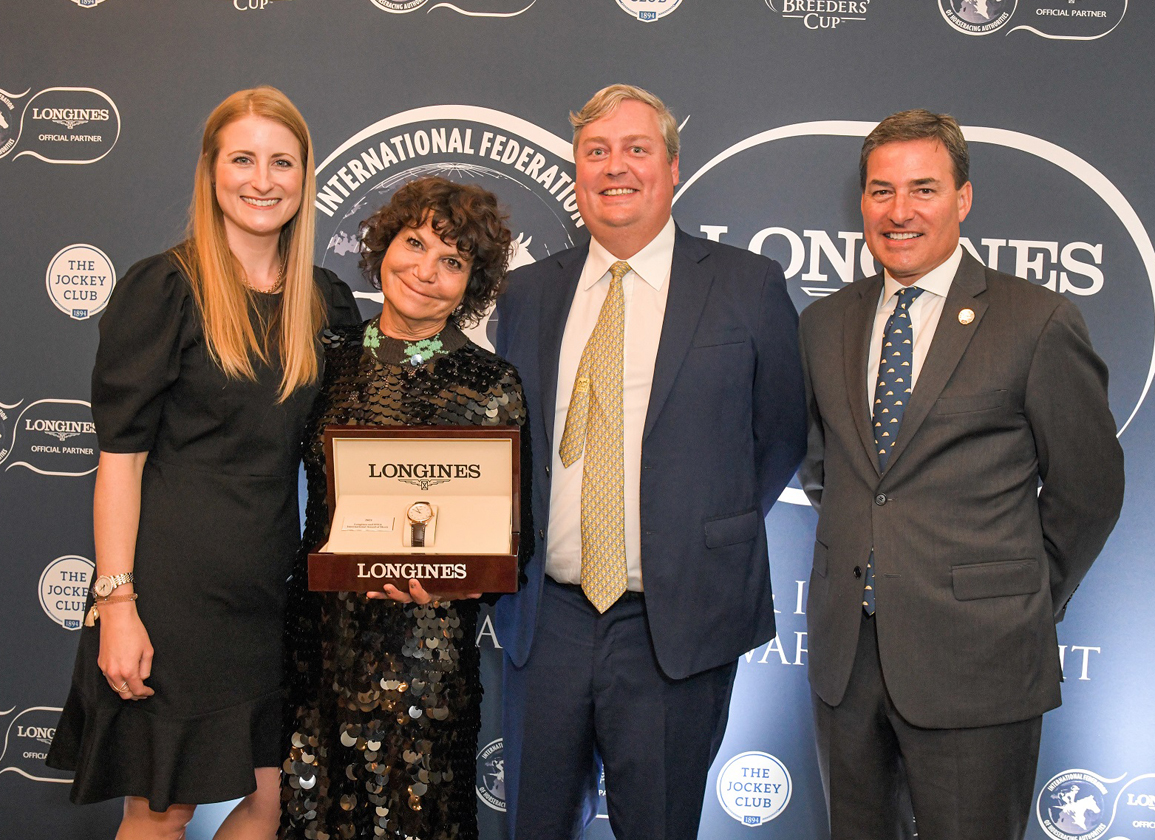 The Niarchos Family was awarded the 2021 Longines and IFHA International Award of Merit at Del Mar during the Breeders' Cup World Thoroughbred Champions on Friday, Nov. 5. Started in 2013 by Longines and the IFHA and given to horsemen and horsewomen who make lifelong contributions to Thoroughbred racing, the award was accepted by Maria Niarchos-Gouaze on behalf of her family. More than 125 Group or Grade 1 winners have been bred and/or campaigned under their banner, and they have been long-time supporters of the Breeders' Cup. Representatives from Longines, the International Federation of Horseracing Authorities (IFHA), the Breeders' Cup and The Jockey Club were in attendance.

“On behalf of my brothers and myself, I would like to thank Longines, the IFHA, the Breeders' Cup, and The Jockey Club for this great honour,” said Niarchos-Gouazé. “I would also like to thank all of our horses, the jockeys who mainly found the winning post, our trainers, our veterinarians and farriers, and all of the individuals who have worked on the studs and in our trainers' yards.

The late Stavros Niarchos, a Greek shipping magnate, first became involved with Thoroughbred racing in the 1950s. After a break, he returned in the 1970s. The 1956 Middle Park S. winner Pipe of Peace (GB) (Supreme Court {GB}) was his first major winner. Niarchos-Gouaze, his daughter, took over the Thoroughbred business upon his passing in 1996. Alan Cooper serves as the family's racing manager.

“We are delighted to celebrate tonight the Niarchos Family, whose strong commitment and dedication to Thoroughbred racing have been rewarded by so many remarkable successes over the years,” said Matthieu Baumgartner, Longines Vice President Marketing. “The history of the family proves that equestrian sport is one of passion, a passion that Longines has been sharing for a century and a half. Today, we are the partner of some of the major international institutions, including the IFHA, and provide our timekeeping expertise to prestigious events all around the world in the disciplines show jumping, dressage, eventing and of course, horse racing.”

“I would like to congratulate the Niarchos Family as this year's recipient of the Longines and IFHA International Award of Merit,” said IFHA Chair Winfried Engelbrecht-Bresges. “Reflecting upon the significance and the values associated with this award, I am struck by the level of success achieved by the Niarchos Family in nearly every corner of the globe, spanning multiple generations.

“On racetrack achievement alone, the Niarchos Family would be worthy recipients of this award, but their steadfast support of our industry is what sets them apart. Their unwavering partnership and development of international racing and breeding is a special feat, and it must be celebrated.”