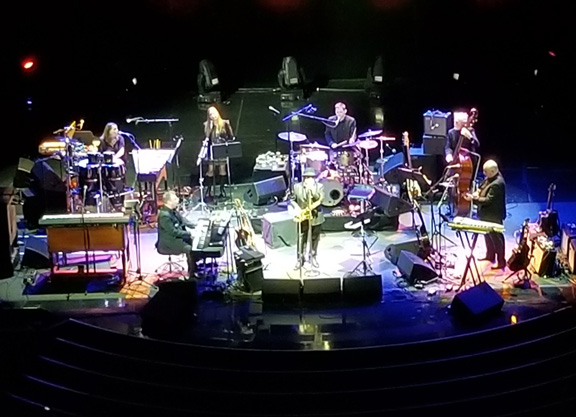 The great thing about Vegas is the options afforded to you each night. I expected to spend Friday evening in the hotel room, handicapping. Instead, due to some last-minute maneuvering by my friend Jim Mulvihill, formerly of the NTRA and now of TwinSpires, I saw Van Morrison in concert, ate one of the better meals I’ve had, drank frozen cocktails at an off-strip tiki bar and ultimately was assaulted with cologne.

Here’s a timeline of how things went down.

6:30 p.m. – Old Fashioneds at the Breeze Bar in Treasure Island

7:45 – Ride to Caesar’s with an affable Iranian cabbie. In the span of 12 minutes, we cover Mosaddegh’s overthrow, the Shah’s competence and the political power of the country’s mullahs. This will be, by a country mile, the intellectual high point of the evening.

8:03 – Chastised by security guard for not arriving promptly. “Van is on TIME,” he says. We ascend several levels of escalators to get to our balcony seats.

8:05-9:45 – We miss two songs. But no matter. Van is indeed the man. At 73, he sounds and looks amazing. Pinstripe suit. Fedora, dark sunglasses. (Really, Van without glasses, wearing shorts and flip-flops, could probably stroll the street completely unrecognized.) He does some covers–“Have I Told You Lately That I Love You” and “Baby Please Don’t Go included–that are forgettable. But his own stuff is otherworldly good. He’s got a six-piece band behind him. They take the rock edge of most of the hits and embrace Van’s jazz leanings. The vibraphonist is just killing it. The bassist looks like an old punk Hemingway. They close with “Brown Eyed Girl” and “Gloria.” The crowds is loving it all. If we could all age like this.

10:00 – We meet up with some more people and move on to dinner at David Chang’s Momofuku in the Cosmopolitan. This is a remarkable meal. Shishito Peppers with smoked salt and lime. A heritage pork chop that’s crispy and fatty. Pork belly buns and black rruffle ramen with hozon, egg yolk and chive. There is short rib kimchi stew with burrata, rice cakes, and mushrooms. Everything is rich and complex. There is a drink called Penicillin, a scotch-based, smoke-infused cocktail with ginger and honey. There’s something called 24K Magic, with rye, carrot, ginger, and oloroso. At some point you just have to push away from the table before any more food is ordered.

11:45 – It is decided we should go off strip. We find a place called The Golden Tiki. Its location in a strip mall belies how terrific this place is. It’s dark with a long bar and a wall of miniature shrunken heads. Ska band in the back. The drinks are rated, 1 through 5, to indicate strength. We start with a four-pointer called the Painkiller.

12:34 am. – Bathroom attendant asks if I want some cologne. The words “Hit me with it” have barely left my mouth when I’m my throat is struck by a triple blast of an off-brand Drakkar Noir. I have made a huge mistake. I return to the table and people shift away. I will blame the Painkiller.

6:45 a.m. – I am up early to handicap the NHC charity contest. By mid-afternoon, when the contest races begin going off, it’s clear I will need more Painkillers.