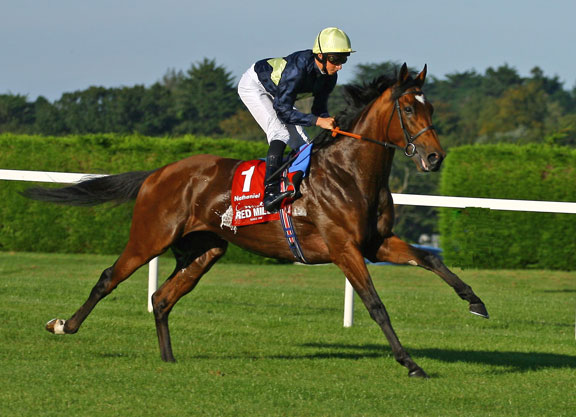 Newsells Park Stud resident Nathaniel (Ire) (Galileo {Ire}), sire of G1 Prix de l’Arc de Triomphe heroine Enable (GB), will stand for £20,000 in 2018, the stud announced Monday. The English triple highweight and MG1SW’s oldest foals are only 3-year-olds, and his star filly has collected five top-level victories this year including the Epsom Oaks and the Irish equivalent. Besides his four stakes winners, Nathaniel also had Enjoy Vijay (Ger) run second in the G1 German Derby, while Back On Board (Ire) was the G2 Italian Derby bridesmaid.

Newsells Park Stud’s General Manager, Julian Dollar said, “We always felt that Nathaniel’s progeny would improve markedly from two to three, but even we could not have imagined that his first 3-year-old crop would make such a significant impact. For Nathaniel to produce a horse of her ability with his very first crop marks him out as a special stallion. However, Enable was not the only horse by Nathaniel who improved spectacularly during their 3-year-old career and the 10 other group and stakes performers from his first crop include high-class colts, as well as fillies like Melodic Motion (Ire) and God Given (GB), who both improved more than 20lbs during the year. Nathaniel offers breeders exceptional value at £20,000.”

Also standing at Newsells in 2018 is MG1SW sprinter Equiano (Fr) (Acclamation {GB}), who remains at £8,000. The veteran’s The Tin Man (GB) captured the G1 Diamond Jubilee S. and placed in the G1 32Red Sprint Cup this season.

“Our other Group 1 sire, Equiano, is a potent source of speed and a model of consistency,” Dollar continued. “Thirteen group or stakes winners from his first three crops, including six group or stakes winning 2-year-olds and a dual Group 1 winner in The Tin Man, mark Equiano out as stallion that should appeal to breeders looking for speed as well as great value. Equiano is a proven sire of fast horses, 89% of his progeny’s wins have been over less than a mile, and his record is only set to improve over the years ahead.”