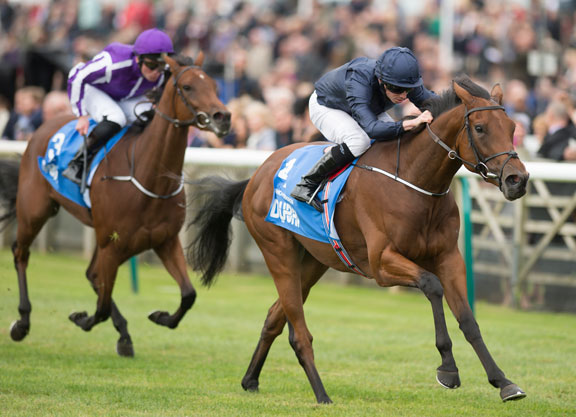 Aidan O'Brien claimed the trifecta in last year's G1 Qipco 1000 Guineas when Minding (Ire) led home a trio of Galileo (Ire)-sired Ballydoyle contenders to become the first since Bosra Sham (Woodman) in 1996 to claim the distaffers' Classic after garnering the previous year's G1 Fillies' Mile. He will attempt to repeat the feat in Sunday's renewal by sending out three more Galileo-sired runners in Newmarket's one-mile test. They are headed by Rhododendron (Ire), who will exit the nine hole coming back off a 2 1/4-length defeat of re-opposing stablemate Hydrangea (Ire), herself drawn in six, over course and distance in said Fillies' Mile. The triumvirate is completed by Winter (Ire), whose ante-post odds have collapsed from 50-1 to as low as 7-1 in the wake of a runner-up finish to Hydrangea in last month's G3 1000 Guineas Trial at Leopardstown. The latter has been allocated stall seven. All three are owned by a variation of the Magnier-Tabor-Smith registration, which has enjoyed success in three of the last five renewals and bids for a third straight win following the exploits of Legatissimo (Ire) (Danehill Dancer {Ire}), who was drawn 13 of 13 in 2015, and Minding, who bested 15 rivals exiting gate eight last year. “Rhododendron is a very nice filly and won the Fillies' Mile well last year,” O'Brien said of the 7-4 favourite. “She got the mile well as a 2-year-old last year so you would imagine she'll get a good bit further this year. She's in good form and is a clear-winded, good-minded filly. We think she's straightforward enough to ride, we've been happy with her since last year and physically she's done very well.” Joseph O'Brien fared no better than third, aboard Maybe (Ire) (Galileo {Ire}) in 2012 and Moth (Ire) (Galileo {Ire}) in 2013, in five 1000 Guineas rides and bids for instant success with his first Classic runner as a trainer here. Chantal Regalado-Gonzalez's G1 Moyglare Stud S. heroine Intricately (Ire) (Fastnet Rock {Aus}), who lowered the colours of Hydrangea and Rhododendron in that contest, comes out of box five with brother Donnacha in the plate and returns to action coming back from a fourth in a hot renewal of Leopardstown's G3 1000 Guineas Trial. The Moyglare serves as a marginally better guide to success in this Classic with winners Minding, again, and Sky Lantern (Ire) (Red Clubs {Ire}) doubling up in recent years. “She ran well [conceding three pounds to all ten rivals] at Leopardstown in what was a competitive race,” the fledgling trainer explained. “It was her first run of the year and hopefully she'll come on from it. It's nice to have a runner, but you can't go into a race like the 1000 Guineas expecting to win. It would be unbelievable if it did happen, but we'll see what happens.” With the defection of G3 Fred Darling S. victress Dabyah (Ire) (Sepoy {Aus}), who instead points to Deauville's May 14 G1 Poule d'Essai des Pouliches, John Gosden relies on another Abdullah Saeed Al Naboodah colourbearer to lead the home defence. The local conditioner, whose lone success came courtesy of Lahan (GB) (Unfuwain) in 2000, is represented by G3 Nell Gwyn S. winner Daban (Ire) (Acclamation {GB}) although, with the exception of Speciosa (Ire) (Danehill Dancer {Ire}) in 2006, winners of that trial have not enjoyed subsequent success since the heady days of the 1980s when Fairy Footsteps (Ire) (Mill Reef), Pebbles (GB) (Sharpen Up {GB}) and Oh So Sharp (Ire) (Kris {GB}) ripped up the Rowley Mile track in both contests. “Daban handled Newmarket well [in the Nell Gwyn] and has come out of her trial very well,” indicated Gosden after his filly drew gate one. “I'm very happy with her, there is a lot more mentally to come and she will come on for that race. It looks like an exciting race and we've got all the respect in the world for Rhododendron, obviously, as she comes with the solid form.”