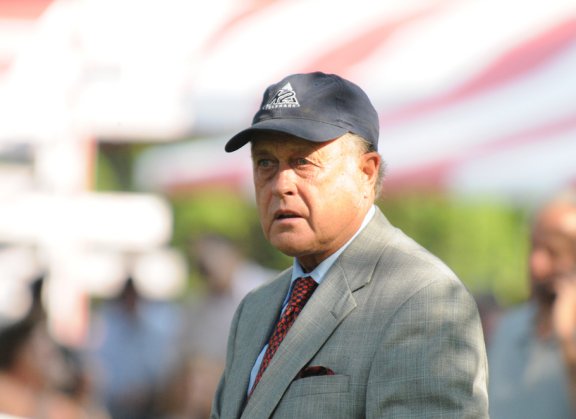 The $150,000 Jonathan Sheppard for 4-year-olds and up going 2 3/8 miles is slated for Thursday, Aug. 19 during the summer meet at historic Saratoga Race Course.

“It seems fitting that one of the premier steeplechase stakes in the country is going to be named in honor of Jonathan Sheppard,” said Bill Gallo, Director of Racing for the National Steeplechase Association. “He has been the dominant force in American steeplechase racing for decades and has always represented the sport in a positive way, particularly at Saratoga, where his success has gained national attention. We thank NYRA and the New York Turf Writers for honoring Jonathan in this fashion.”

The 80-year-old Sheppard announced his retirement from American racing in early January. He capped an incredible 56-year racing career in which he was the leading National Steeplechase Association trainer 26 times, campaigning 15 Eclipse award winners over hurdles and flat ground.

Sheppard made an indelible mark on New York racing, winning at least one race at Saratoga for 47 consecutive years from 1969-2015. He was also the leading Saratoga trainer in 1984 and 1985. Fittingly, Sheppard earned a reputation for dominating the New York Turf Writers Cup, figuratively stamping his name on a race he won 15 times before the announcement that his name will literally be synonymous with the contest.

“Jonathan Sheppard's long and storied career, in particular his accomplishments at Saratoga Race Course, will be remembered for years to come,” said NYRA President and CEO Dave O'Rourke. “His decades of commitment and success within the sport make this a well-deserved honor. It's only fitting that he is celebrated with a stakes race at the Spa in light of his unprecedented streak of 47 years with at least one winner at Saratoga.”

The Ashwell, England native is the winningest trainer in U.S. jump racing-history and is one of only two trainers to win championships with both flat and jump horses. Equibase credits him with a career ledger of 3,426 wins with 3,099 runner-up efforts and 2,975 third-place finishes in 20,997 starts with earnings of more than $88 million.

A 1990 Hall of Fame inductee, Sheppard continued building on a historic legacy for the next three decades. In his final year of training in 2020, Sheppard finished atop the NSA trainer standings, besting runner-up Jack Fisher, who had been the leading trainer nine years running.