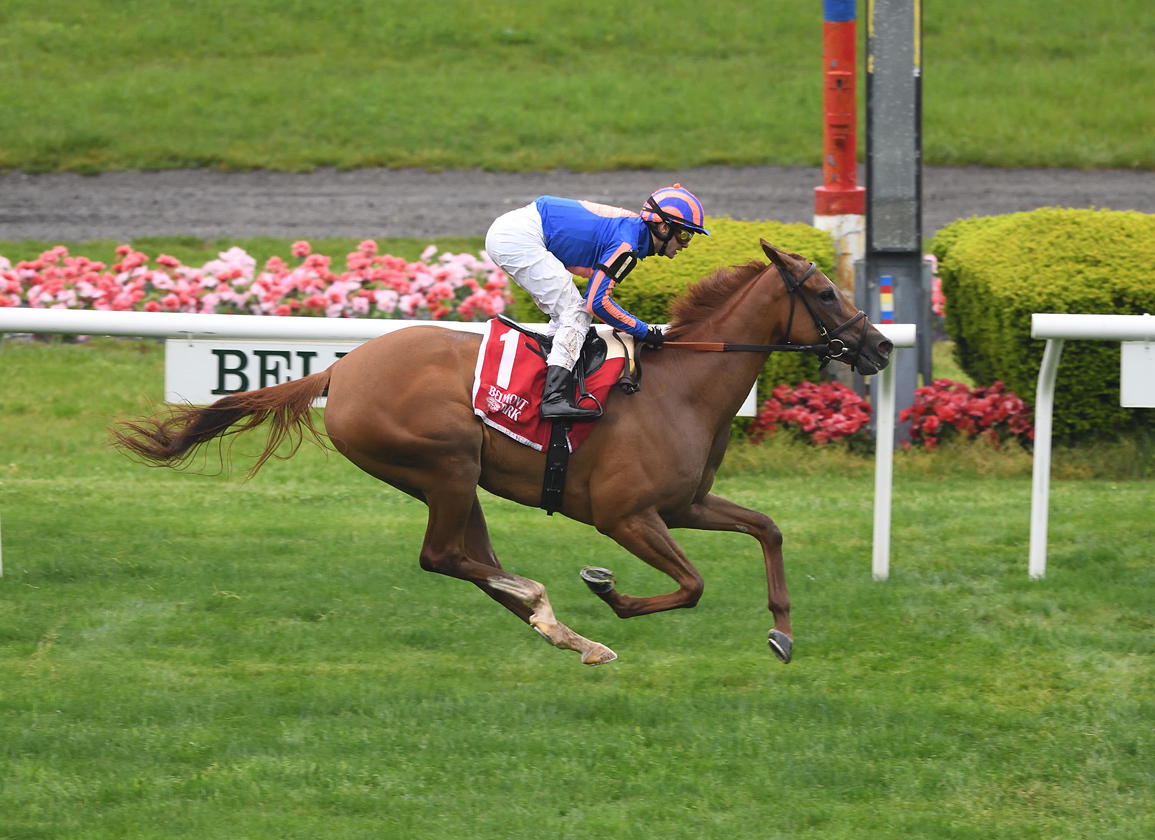 Since being moved to the Friday before the GI Belmont S. to become part of the Belmont Racing Festival in 2015, the 1 1/4-mile New York S. has taken on greater importance and attracted higher-quality fields every year. This Friday, it will be showcased as a Grade I for the first time, with an imposing group of Chad Brown fillies and mares taking center stage on a Belmont eve card that features five graded stakes and four consecutive to close out an 11-race slate.

Brown, who has won the New York three times (2016, 2018, 2019), can move into a tie with Christophe Clement (four) for the most New York conquests in the likely scenario one of his charges prevails in the seven-horse field. Leading the way for the powerhouse barn is Peter Brant and Michael Tabor's Rougir (Fr) (Territories {Ire}). A Group 3 winner as a juvenile in her native France in 2020, the chestnut avenged three straight losses by a neck or less last summer with a triumph in the G1 Prix de l'Opera Longines Oct. 3 at Longchamp. Seventh after a tough trip in the GI Maker's Mark Breeders' Cup Filly & Mare Turf in her final start for Cedric Rossi, she made an extremely auspicious debut for Brown, exploding home from last to take the local GIII Beaugay S. by a widening three lengths May 14.

“She was tired when she got to me in the winter,” Brown told the NYRA notes team. “We turned her out and let her get some weight on her. Then she started to blossom and look tons better. Her race was excellent in the Beaugay and I think she is a horse who will be at her best anywhere from a mile and an eighth to a mile and a quarter.”

Brant will be represented on his own by the other three Brown fillies in the race, though it's probable rail-drawn Flighty Lady (Ire) (Sir Percy {GB}) will employ 'rabbit' tactics to set the race up for the rest of the Brant/Brown juggernaut. Their other two contenders on paper are Virginia Joy (Ger) (Soldier Hollow {GB}) and the six-for-six Bleecker Street (Quality Road). The former, not definite to start according to Brown, was a Group 3 winner and Group 1 placed two summers ago in Germany. Fourth in the New York last year, she annexed the GIII The Very One S. Mar. 5 at Gulfstream before having her breakout success with an eye-popping, wire-to-wire 14 1/4-length romp in the GII Sheepshead Bay S. over yielding turf here May 7, easily the largest winning margin in a race that's been run since 1957. The latter will make her Grade I debut coming off a trio of wins in the GIII Endeavour S., GII Hillsborough S. and GIII Modesty S.

“We are 50/50 to run Virginia Joy. She is training well and if one or two horses come out, we will maybe run her. We haven't decided yet,” Brown said. “Bleecker Street keeps running well. She steps up and does what we ask of her. We'll test her at a mile and a quarter to see if she can step up again.”

The only horse with any realistic chance to upset the Brown apple cart is Family Way (Uncle Mo), who captured the GIII Orchid S. Apr. 2 at Gulfstream before running second to star turf marathoner War Like Goddess (English Channel) last out in the GIII Bewitch S. Apr. 29 at Keeneland.

Jackie's Warrior Holds All the Cards in True North

Earlier in the card, the two dirt graded stakes feature short fields but marquee names, as champion Jackie's Warrior (Maclean's Music) will line up as an overwhelming favorite in the GII True North S. Passing on challenging superstar Flightline (Tapit) and streaking Speaker's Corner (Street Sense) in Saturday's GI Metropolitan H., the connections of the multimillionaire and last-out GI Churchill Downs S. romper will instead opt for a significantly softer spot looking to secure the bay's 11th win in 15 starts.

“It's a rare opportunity to be able to return an Eclipse champion. Obviously, I'm very grateful to [owners] Kirk and Judy Robison for that opportunity,” said trainer Steve Asmussen. “He's just a brilliant horse, he's absolutely brilliant. He's everything you would want in a racehorse mentally or physically and it's quite obvious how fast he's been. He has a tremendous attitude, a true racehorse. He has maintained his Grade I-winning form this year, and the only difference we're looking for this year is to finish it off by winning the Breeders' Cup [sixth last year as the favorite in the Sprint].”

Though the field looks overmatched on paper, Baby Yoda (Prospective) is interesting at a price if the pace heats up in the 6 1/2-furlong test. Despite the presence of a superstar in the race, the dark bay gelding sports the highest Beyer Speed Figure in the field via the dazzling 114 he earned for a Saratoga allowance score last summer, a race in which he dusted stablemate and subsequent MGSW Olympiad (Speightstown). His form since then has been spotty, but he's won his last two and zipped home in :23.49 for his final quarter in a Churchill starter allowance last out May 5.

Pace a Must for Obligatory

The other dirt graded, the seven-furlong GII Bed o' Roses S., has just four horses entered and as such will be run as the third race on the card, but contains intrigue with a clash of Grade I-winning fillies. Juddmonte homebred Obligatory (Curlin) uncorked a scintillating last-to-first rally, making up 11 lengths in the final three furlongs, to take the GI Derby City Distaff S. last out on Churchill's GI Kentucky Derby undercard. Prior to that, she was an easy victress of Gulfstream's GIII Hurricane Bertie S. The gray will have to produce a similar effort Friday to run down last summer's GI Longines Test S. heroine Bella Sofia (Awesome Patriot), who kicked off her 4-year-old campaign with a hard-fought nose victory in the local GIII Vagrancy H. May 14 and figures to have the advantage in a short field with her potent early speed.

“Her advantage is if there's a fast pace. There's a couple horses in there that could go–but it's not :44 speed,” Obligatory's trainer Bill Mott said. “She has been ridden closer. Down at Gulfstream there was no pace in there and [Tyler] Gaffalione kept her closer and she went on and won.”

“When a filly like that comes along and fights the way she did [in the Vagrancy] it's impressive,” trainer Rudy Rodriguez said of Bella Sofia. “The other filly already had a head in front and then she came back and put a head in front of her. It's very special. Those types of horses don't come along often. She's a very tough filly and she's in top form right now.”

Of the potential pace advantage, Rodriguez said, “I don't think she really needs the lead but she always breaks good, so why take the speed away from her. Speed is dangerous any day of the week. If she breaks good, we can take it from there. If somebody goes, we can sit.”

Rounding out the stakes action Friday are the GII Belmont Gold Cup Invitational S., the only two-mile graded stakes race run in America, and the GIII Intercontinental S. at six furlongs on grass. The Gold Cup usually attracts major European participation, and in fact has been won by Euro-based trainers in each of the last four runnings, including most memorably when Queen Elizabeth II's Call To Mind (GB) (Galileo {Ire}) scored in 2018.

This year, however, only two invaders will contest the eight-horse field, with both looming major chances. The narrow morning-line favorite is Hambleton Racing XXXIII's Outbox (GB) (Frankel {GB}), who took down the HH The Amir Trophy Feb. 19 at Doha in Qatar, while Manfred Ostermann's Loft (Ger) (Adlerflug {Ger}) has earned stakes wins at 1 3/4 miles and two miles in his native country. Todd Pletcher trainee Abaan (Will Take Charge) appears the clear best shot for the home team, having captured the H. Allen Jerkens S. at Gulfstream, the only other American two-mile stakes, by 4 1/2 lengths over the winter.

A well-matched field of 13 in the Intercontinental brings the curtain down on the card at 6:22 p.m. ET. Arguably the best betting race of the day, it's highlighted by lukewarm 4-1 morning-line favorite Caravel (Mizzen Mast), a six-time stakes winner who flattened out late to be sixth facing males in the GII Twin Spires Turf Sprint S. last out May 6 at Churchill.