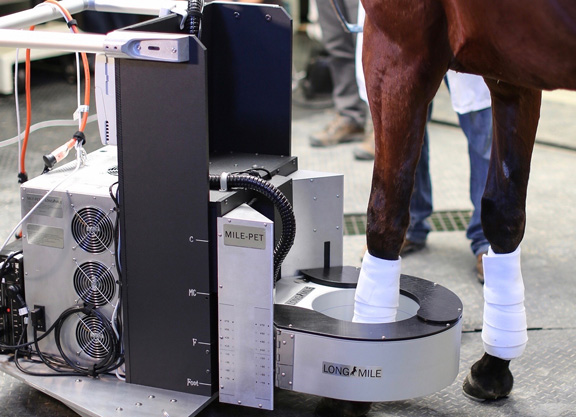 “I think when we’re done here, Santa Anita’s going to have the most advanced and comprehensive availability of tools in the imaging realm of anywhere in the world.”

The first? Improve the early detection and diagnosis of potentially catastrophic injuries in racehorses. The other? Help rehabilitate the public image of a racetrack that has endured an Annus horribilis by any stretch of the imagination.

Indeed, it was back in May, during the height of the welfare crisis, TSG announced that it had invested $500,000 to purchase the machine.

“It’s exciting,” said Fravel, Friday. “Mostly, we’re excited for the benefits to the horses who perform here at Santa Anita, Del Mar and throughout California, in terms of what we think this will do for the long-term health and welfare of the animal.”

The press conference began outside the Southern California Equine Foundation (SCEF)-operated Nuclear Medicine Facility nestled in the barn area at Santa Anita. Besides Fravel, speakers included veterinarian Joe Dowd, president of the SCEF, which had invested another $250,000 of its own money in the technology.

“It’s a much higher resolution than we get with our regular nuclear scintigraphy imaging,” said Dowd, comparing the new PET technology to the widely used bone scan–a comparison he suggested was akin to trying to read with and without spectacles. “The original imaging is two dimensional. What the new PET scan allows is three-dimensional imaging. And we can actually visualize it on a computer screen.”

Mathieu Spriet, associate professor of Surgical and Radiological Sciences at the University of California Davis’s School of Veterinary Medicine, where the PET scan machine was developed, took up where Dowd left off.

“This is not something that happened overnight,” said Spriet, the brainchild behind the new technology. “We did the first PET scan on a horse at UC Davis over four years ago. We saw the potential, and I remember meeting with Dr. [Sue] Stover, discussing the initial findings. She was really excited about it–it was like finding gold,” Spriet added, before he led the assembled reporters inside for a live demonstration.

The way the MILE-PET-scan works is similar to a regular bone scan. A radioactive tracer is injected into the body, which will then light up under imaging any abnormal areas in the bone. But this particular machine resembles a basketball hoop hovering above the ground, with a quick-release mechanism in case the horse becomes fractious.

The hoop is able to slide up and down, in order to take images at different parts of the leg, each image taking approximately 3-4 minutes. “We’ve validated the scan all the way up to” and just over the knee, Spriet explained. And why the emphasis on the lower leg?

Studies have shown that pre-existing injuries which aren’t always clinically apparent are present in more than 85% of catastrophic breakdowns, with the fetlock proving to be the most common site of catastrophic injury. The proximal sesamoid bones within the fetlock are especially vulnerable. Injuries to these bones account for 50-60% of all musculoskeletal fractures, researchers have found.

Thanks to a Grayson-Jockey Club Research Foundation grant, Spriet has already imaged about 25 horses–20 of them at UC Davis along with five already at Santa Anita. He hopes to image about 200 horses in total within the first year. Each horse imaged will also have a bone scan taken, as a point of comparison. “We need to find what is a normal baseline for the racehorse,” Spriet explained.

As the press conference concluded, Southern California-based veterinarian Ryan Carpenter announced that the long-awaited standing magnetic resonance imaging (MRI) unit–funded in part with $450,000 from the Dolly Green Research Foundation–will arrive by the middle of January. Indeed, the press conference took place in front of a roughly 10′ x 10′ x 30′ slab of freshly poured concrete, onto which the unit will go.

“MRI is the gold standard in human orthopedics, so, if your favorite quarterback gets injured this Sunday, they’d be in for an MRI first thing Monday morning,” said Carpenter, before emphasizing how the MRI and PET diagnostic technologies will eventually complement one another.

“I think we’ll look back at this day and see that this was the day that set the tidal wave across the United States as just being the pinnacle of horse safety,” he added. “And it speaks to the commitment of The Stronach Group, the Dolly Green Research Foundation, and the Southern California Equine Foundation.”