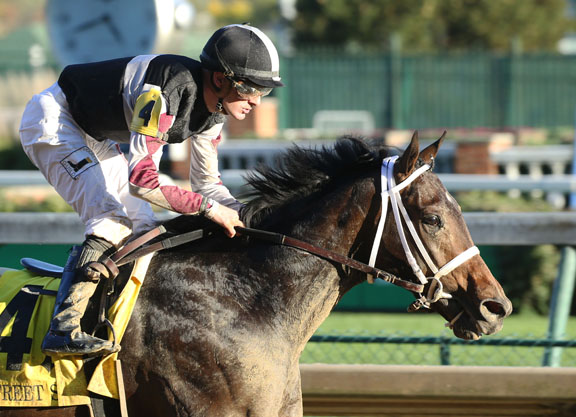 “We're leaning toward the Travers,” confirmed the colt's new trainer Bill Mott. “The partnership group wants to have a good look at that. He'll work probably the first part of the week.”

Previously campaigned by Sagamore Farm and trainer Stanley Hough, South Bend won last year's Street Sense S. over the main track at Churchill Downs and his three stakes placings over the turf include a third-place finish in the Feb. 29 GIII Palm Beach S.

Of the colt's versatility, Mott said, “I think that's one of the reasons they bought him. He looks good on both surfaces.”

“We breezed him the one time. We like the horse, he's doing well,” Mott said. “He's a nice horse to train. He moves well and he worked well for us. I'm happy with him.”

Trainer Mike Stidham confirmed that Godolphin homebred Mystic Guide (Ghostzapper), most recently a closing third in the July 16 GIII Peter Pan S., is also under consideration for the Travers.

“The Travers is a possibility. He'll work [Saturday] and we'll know more after he works,” said Stidham. “Ultimately, he has to put himself in a better position early. You can't win those types of races with that much to do late in the race. Our goal was to try blinkers on him and see what type of response he gives, so we can try to be a little bit closer.”