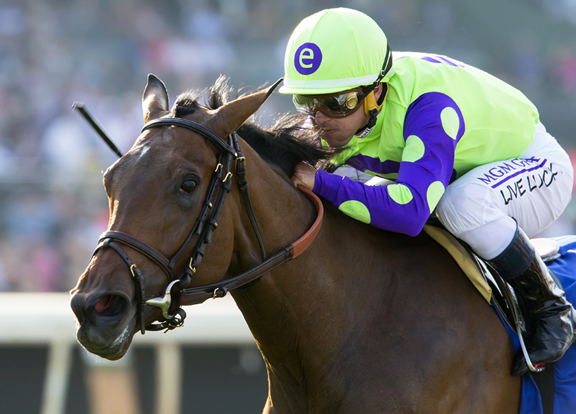 “She's made of steel,” said Brown, who captured his first Breeders' Cup race with Maram (Sahm) in this event in 2008 and added a win with Lady Eli (Divine Park) two years ago. “She's a terrific chapter in a terrific story.

Brown continued, “It was a really good field. Again, we've competed in this race virtually every year since they've had it, and I thought this was one of the stronger editions of it on paper. I think sky's the limit for her.”

Forwardly placed for Javier Castellano here as Lull (War Front) let it roll through fractions of :22.35 and :45.75, New Money Honey was patiently handled and held her spot on the far turn. Kept in the clear and out of harm's way from there, New Money Honey kicked it into another gear in the final eighth of a mile to inhale the pacesetter and kept on well late to get the money.

Coasted, third as the favorite in the Miss Grillo, closed from last under a ground-saving ride from Hall of Famer Mike Smith to outrun her 23-1 odds. Cavale Doree (Fr) (Sunday Break {Fr}), heroine of the G3 Prix du Calvados, also rallied smartly late for third.

“I tried to secure my spot around the first turn and then I tried to save all the ground the best I could,” winning jockey Javier Castellano said. “She gave me a very good run down the lane and it was good enough to win the race.”

Favored La Coronel, drawn widest of all in post 14, was caught wide throughout and made a sweeping move on the far turn to report home sixth.

New Money Honey was also pre-entered in the GI Breeders' Cup Juvenile Fillies on dirt. Longer distances will be no problem for the bay moving forward, according to Brown.

“With all the big races next year being longer than a mile, I think this filly has an unbelievable future, and it's the first horse in this race I've ever cross-entered in the dirt race because she trains well on dirt as well,” Brown said. “So we're going to enjoy this. She won on the turf. Thankfully, we made the right call. But it's not even out of the question that we give her a spin on the dirt before a race like the [GI] Kentucky Oaks just to be sure. I think she's that talented.”

Bob Edwards's e Five Racing is quickly becoming a big player and was quite active through bloodstock agent Mike Ryan at this year's Keeneland September sale, paying $1-million for a son of Curlin (hip 845) and $520,000 for a colt by Paynter (hip 747).

Ryan signed the ticket at $450,000 to acquire New Money Honey at the 2015 Keeneland September sale. New Money Honey became the first graded winner for the fledgling operation in the Miss Grillo.

“It's a great experience,” Edwards said. “We're new owners, as you guys know. We have not won a maiden, as you know. We've only won stakes races thanks to great horses, great talent, great bloodstock agents, and we're pretty excited for her to take her talent down to South Beach.”

New Money Honey's dam, the unraced WinStar Farm homebred Weekend Whim (Distorted Humor), is a full-sister to Grade I winner Any Given Saturday (Distorted Humor) and a half to graded stakes winner Bohemian Lady (Carson City). The 10-year-old mare produced a filly by Pioneerof the Nile this year and was bred back to Carpe Diem.