New Money Honey Back to Winner's Circle in Wonder Again 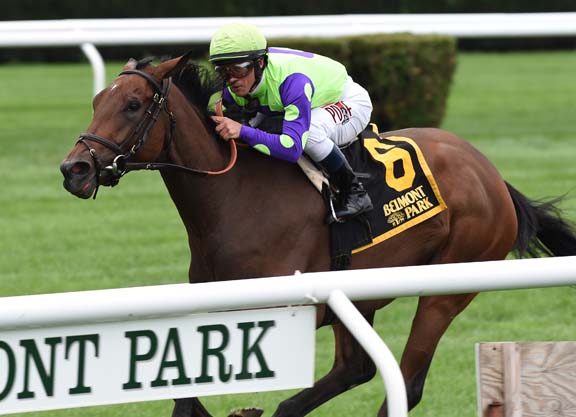 Sent off the prohibitive favorite, New Money Honey broke sharply from her outside post and angled to the rail around the bend. Uncharacteristically on the front end, the bay filly was well in hand while setting fractions of :24.44 and :49.09. She turned back Dream Dancing in upper stretch and skipped clear to the wire, as stablemate Fifty Five found clear running late to get up for second.

“Heading into the race and looking at the field, I didn't see too many horses that could keep up with her,” commented winning rider Javier Castellano. “My plan was to just dictate the pace and go to the lead. She was much the best. I give all the credit to Mr. [Chad] Brown. The way he's been training that filly, I just enjoyed the ride.”

Fifty Five, winner of the GIII Florida Oaks in March for Tom Bush, was making her second start for Brown after a third-place finish in the Apr. 23 Memories of Silver S.

“I thought Fifty Five ran a much better race this time,” Brown said. “She got a better trip today. She was more forwardly placed today because there wasn't enough speed. I was very encouraged with how she ran, and it looks like she'll improve with longer distances as well. I wanted all three of them to adapt to the pace and be there as far as they can. And they all were closer than they normally are.”

New Money Hone opened her career with a runner-up effort behind subsequent graded stakes winner La Coronel (Coronel John) last September at Saratoga. She graduated in the Oct. 2 GIII Miss Grillo S. in her second start and bested Coasted (Tizway) by a half-length to win the Breeders' Cup Juvenile Fillies Turf Nov. 4. She was most recently a non-factor sixth over a firm course at Keeneland in the Appalachian.

New Money Honey is out of the unraced Weekend Whim, a full-sister to Grade I winner Any Given Saturday and a half to graded stakes winner Bohemian Lady (Carson City). The mare produced a filly by Pioneerof the Nile in 2016 and a colt by Carpe Diem in 2017. New Money Honey's multiple stakes placed half-sister Coconut Shrimp (Giant's Causeway) sold for $485,000 while in foal to Palace Music at last year's Keeneland November Sale. The winner's second dam Weekend in Indy was purchased by WinStar's Lisa Troutt for $290,000 while in foal to Carson City at the 2000 Keeneland November sale.