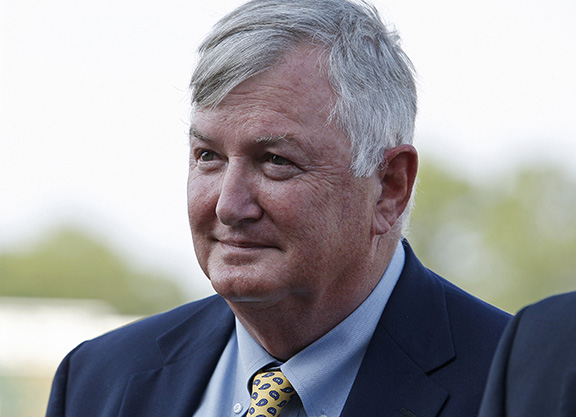 John Hamilton Forbes, a top trainer on the New Jersey circuit for four decades and the president of the New Jersey Thoroughbred Horsemen's Association, passed away Sunday after a battle with cancer. He was 73 years old.

“John was New Jersey racing,” said Dennis Drazin, chairman and CEO of Darby Development LLC, operators of Monmouth Park Racetrack.  “He was a tireless advocate for the industry, for the horsemen and for Monmouth Park.

“With a boundless capacity for kindness, John embodied everything good about this business-honor, integrity, compassion and selflessness. More than that, John had an infectious energy for racing.  I will forever cherish our many years working together and appreciate not just our friendship but our collective effort on behalf of the horsemen to better this industry and the lives of those who work in it.”

Forbes won more than 2,100 races from over 14,000 starters, most of them with his longtime assistant Pat McBurney at his side.

“I came around the racetrack when I was 15, 16 and he was like a father to me,” said McBurney. “Over the course of many, many years, he became like a brother and a best friend. It's a very sad time. He loved this sport. He had a great gift of gab and a great way with people. If he got a hold of an idea that he thought was right he just wouldn't let it go, no matter who he had to go up against. John and I spent decades together experiencing all the highs and lows that this business has to offer. It was always a team effort with John. Even after he stopped training on a day-to-day basis he was equally involved as an owner, advisor and most importantly, a friend. It's hard to imagine Monmouth Park without John, but Monmouth Park will forever be better because of John.”

Forbes was born June 20, 1947 in Maryland, the son of two trainers, John Hamilton Chew Forbes, and Nancy Shakespeare Forbes. His mother was one of the first women in America to obtain a trainer's license. He began his career in his home state in 1972 but soon thereafter switched his operation to New Jersey. He was lured to the Garden State by the charms of Monmouth Park.

“When the Meadowlands opened in 1977, we brought horses up to race, and from 1978, we stayed in New Jersey,” he said in 2014. “What was the deciding factor was this place here. Not many of the remaining racetracks in the country have the charm and ambience of this place. I fell in love with Monmouth, that's why we stayed. It's a little hard to describe how Monmouth captures you. But it's a step back in time.”

Forbes thrived after moving to New Jersey. He was the leading trainer at Monmouth five times and topped the standings at the Meadowlands seven times. In 1978, he won 109 races and followed that up with a career-best 233 in 1979.

Forbes dealt mainly with claimers through much of his career but proved he could win at the highest levels when given an opportunity.

In 1995, Forbes and McBurney formed a limited partnership, Phantom House Stables, that raised nearly $2 million to purchase yearlings. The most successful among the group was Tale of the Cat, who won five of his nine career starts including the GII King's Bishop at Saratoga in 1997 and who was second in the GI Whitney. Purchased for $375,000 at Keeneland September, the son of Storm Cat was sold for $11.7 million and has been a successful sire at Coolmore Stud in Lexington, Ky. Of the six horses they purchased that year, four became stakes winners, including Amarillo, winner of the GIII Delaware H., Sumija and Apogee.

Eddie Rosen, who served as the group's pedigree advisor, was a friend of Forbes's for 50 years, having met him in 1970, when Forbes was assistant trainer to John Tammaro, Sr.

“As dominant as he was in the training ranks in New Jersey, having been the leading trainer in New Jersey for so many years, I think his biggest impact came as president of the thoroughbred horsemen's association,” said Rosen. “He was able to employ his analytical and negotiating skills to advance the causes of horsemen in New Jersey. I think that's where he found his true calling.

Forbes was famous for launching the career of Julie Krone, who was his regular rider in the 1980s and early 1990. She rode Tale of the Cat in every race of his career.

“Opening my eyes this morning to a world without John Forbes is a much sadder place,” said Krone Monday morning. “The horses have suffered a loss, and so have the people. He was great with both.” 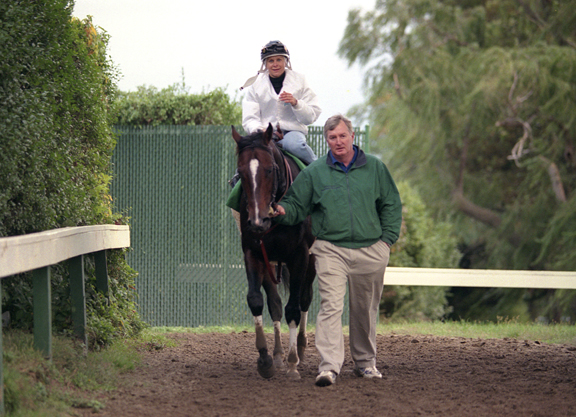 Forbes guides Tale Of The Cat and Jockey Julie Krone off the track at Monmouth Park after a morning workout. Bill Denver/EQUI-PHOTO

“Riding first call for John Forbes at Atlantic City launched my career,” she continued. “I got opportunities from that without any questions asked. The first year I lost my apprenticeship, I got to ride for them. He taught me everything–things about riding, and being convivial with trainers and owners, allowed me to spend time with his family, and taught me how to take care of myself.”

Forbes stepped back from training in 2012 to focus on horsemen's issues, and McBurney took over the stable.

He had been named President of the New Jersey Thoroughbred Horsemen's Association in 2010, after having helped to launch the umbrella organization, the THA, comprised of six states in the mid-1990s. “The whole process was really about trying to get an organization where everyone had an equal voice, and to address important issues of common interest for the benefit of the whole industry while not interfering with other states' issues,” Forbes said in 2017. “We agreed to help the states if they asked for help but also agreed it would be best not to interfere. It was agreed that the organization would not dictate to its members. We'd all be on our own but all together at the same time.”

Forbes also found time to engage in another of his passions: miniature golf. He was introduced to the game in the late 1950s when the family would travel to Atlantic City for racing, and Forbes would spend time in Ocean City, where the boardwalk was dotted with mini-golf courses. Forbes built the Blue Grass Mini Golf Course in 2012 at Monmouth, which hosted the 2014 and 2017 U.S. Open for Mini Golf. He was inducted in to the U.S. Pro Mini Golf Hall of Fame in 2020.

Under Forbes, the NJTHA became a racetrack operator as well, leasing the track from Darby Development when Governie Chris Christie decided in 2010 that the New Jersey Sports and Exposition Authority should get out of the racing business.

“John was a giant among the horsemen,” said Drazin, a longtime friend of Forbes's. “The THA would not have existed in New Jersey without him. He was instrumental in leading the effort to take over the racetrack when Governor Christie decided to put it up for sale. He was the backbone of the organization and he will certainly be missed.”

Due to the COVID-19 pandemic, there will be no services held.