New Details in Ongoing Standoff Between AZHBPA and Turf Paradise 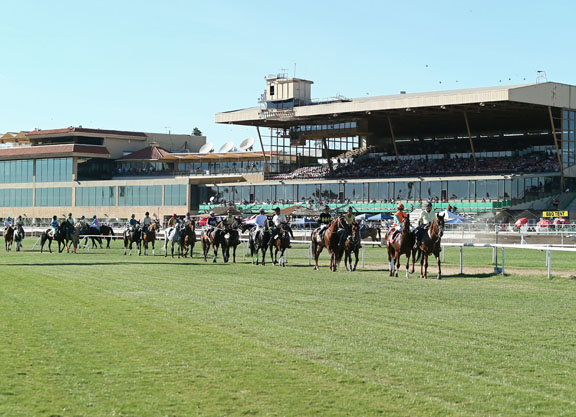 The latest missive in an ongoing game of epistolary ping-pong between the Arizona horsemen and Turf Paradise management has seen the track re-affirm their proposal to stage a race-meet this winter.

“Turf Paradise has submitted live race dates for an 84-day winter meet–Jan. 2 thru May 1, 2021–to the Racing Commission for their approval at the Oct. 8 meeting,” wrote Turf Paradise general manager Vincent Francia in a letter addressed to the horsemen Thursday.

But again, the proposal comes with caveats. The first is a previously stated desire: That the $2.1 million the Arizona Horsemen's Benevolent and Protective Association (AZHBPA) moved from the Turf Paradise horseman's account into its own account be returned.

As per the letter: “With the $2.1 million back in the account and the projected $1 million generated in purse accumulation between now and Dec. 31 plus the purse monies that will be generated during the proposed live race meet, Turf will be able to offer the horsemen a 25% increase (from $80,000 to $100,000 daily) for this proposed meet. Surely the AZHBPA would not object to that?”

“He [Turf Paradise owner Jerry Simms] is trying to get the horsemen wound up with offering them more money,” said AZHBPA president, Bob Hutton, in response to the latest overture from Turf Paradise. “It's not his purse account. It's not his signal.”

The second condition is that the AZHBPA approves both exports and imports of the Turf Paradise signal through May 31, 2021. “Those approvals are essential in order to continue generating money into the purse account, and we simply cannot conduct a live race meet with the AZHBPA constantly threatening to withdraw those approvals,” the letter states.

That demand is not a “deal killer,” said Hutton, who explained that the issue would be a matter for the AZHBPA board to decide. “That's a reasonable request…I'm concerned with the horsemen, not how much money he makes.”

When it comes to purse funds, Turf Paradise management argue that these monies contractually belong to the horsemen that race at Turf Paradise specifically. The horsemen, however, argue that they ultimately wield control over the purse account, as per a prior arbitrated settlement. In a letter last week to Turf Paradise, AZHBPA stated that the purse monies are available for whichever Arizona track stages a live meet.

This latest letter also states that the AZHBPA is “willing” to make only weekly payments to the horsemen's bookkeeper, in the event Turf Paradise hosts a live meet. “As an example, if a horseman wants to withdraw money from his/her account under Mr. Hutton's plans, they would have to wait a week until the funds are deposited,” the letter states.

According to Hutton, if Turf Paradise conducts a live meet this winter, the way the purse account would be managed would have no effect on the speed at which horsemen are remunerated, with trainers having to wait more than a week before the funds are released as it is.

“It's not going to make a difference,” Hutton said. “We'll fund it.”

According to Francia, the AZHBPA's proposal misunderstands the role of the horsemen's bookkeeper, which he describes as a “bank” that fields daily activities.

“That suggestion would not work,” Francia said. “There's much more that goes on with a horseman's bookkeeper than just being a repository for purse money. There's daily activity going on between the bookkeeper and the horsemen.”

And while Francia described the ongoing negotiations as “positive,” he urged haste for a resolution, saying that a live race-meet at Turf Paradise would require six weeks of preparations.

“We have all the essential materials to run a live race meet,” Francia said, in response to suggestions that the track had sold various items necessary to conduct a meet. At the end of the day, “I remain optimistic,” he added. “That's the best I can say.”

This story was posted in Top News and tagged AZHBPA, Turf Paradise.