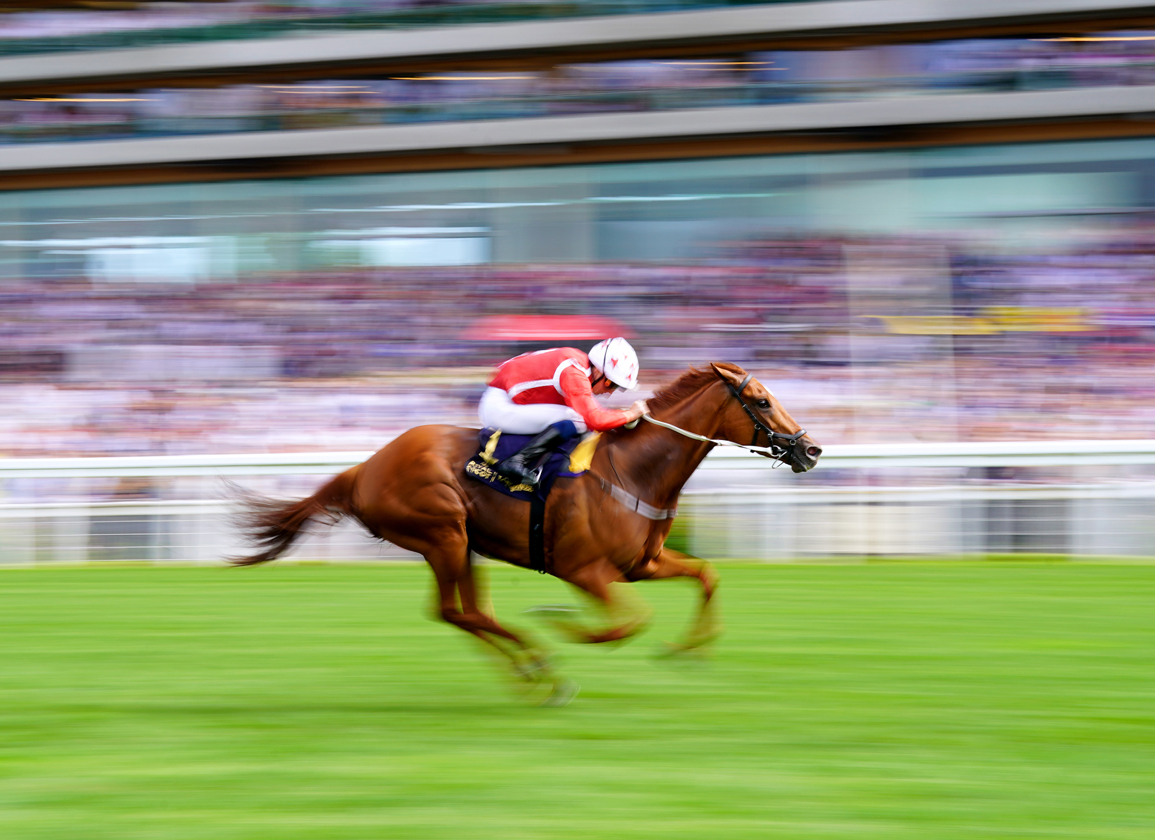 Wednesday's G2 Duke of Cambridge S. offered another episode of stalls drama that seems to have dogged the first two days of Royal Ascot, but by the time Saffron Beach (Ire) (New Bay {GB}) had come home alone there was a sense that Sibila Spain (Ire) (Frankel {GB}) would have needed wings had she not been removed from the contest after going down in the gates. Making her European return under a five-pound penalty due to her winning exploits in Newmarket's G1 Sun Chariot S. in October, the Jane Chapple-Hyam-trained 5-2 joint-favourite gifted William Buick an easy task from the time the field left behind the withdrawn Sibila Spain. Helped by the target of Novemba (Ger) (Gleneagles {Ire}) dead ahead, the chestnut who was last seen finishing fourth in the G1 Dubai Turf S. at Meydan Mar. 26 slid by passing the three-furlong marker and was soon beyond recall. At the line, she rated as the second widest-margin winner so far at the meeting with a 3 1/2-length verdict over the outsider Thunder Beauty (Ire) (Night of Thunder {Ire}), with Primo Bacio (Ire) (Awtaad {Ire}) a further head away in third. “We were going slow, but she got into a nice rhythm. I wanted to get there in good time and not turn it into a two-furlong sprint, but she won very well and it was straightforward for her,” Buick said.

Saffron Beach had won the G3 Oh So Sharp S. at Newmarket in October 2020 before finishing second to Sacred (GB) (Exceed and Excel {Aus}) in the seven-furlong G3 Nell Gwyn S. and to Mother Earth (Ire) (Zoffany {Ire}) in the 1000 Guineas last Spring. Getting it together in the G3 Atalanta S. at Sandown last August and the Sun Chariot, she had failed to fire at Meydan but her trainer had worked on having her at fever-pitch for this. “It is hard going to Dubai off a winter break,” Chapple-Hyam explained. “She was up against hardened colts and geldings and it showed in the finish. We didn't have a prep race, whereas here we went to Chelmsford and the July Course to get the work into her. I presume it will be the [G1] Prix Rothschild [at Deauville] on August 2, the Sun Chariot at Newmarket, and then the Breeders' Cup.”

Jason Kelly, assistant to David O'Meara, said of the runner-up who outran her 40-1 odds. “Thunder Beauty has run a great race. We'll probably drop back to seven furlongs. There is the [G3] Oak Tree Stakes at Goodwood and that will be high on the agenda. She is a high-class filly and is versatile ground-wise. She was big odds and we thought Saffron Beach would be handy so, instead of getting into a duel early, we thought we'd take our time and challenge late. She is probably slightly better over seven furlongs, so we wanted to make sure she got home. It was a super run. My uncle David Kelly owns her and we are creeping up. She was listed-placed last year, then group three-placed and now we are group two-placed.”

Primo Bacio was regaining some form after a lean spell and trainer Ed Walker said, “Finally she has got her ground! This race was a bit of an afterthought really, so we are hoping there will be improvement to come. I did not think we'd get here, but she worked really well and, due to a lack of alternative options, we thought let's have a go. On that basis, you have to be super happy with that. I think she would have been a clear second if she was A1. I think we will go to the [G1] Falmouth, as she ran so well in it last year.”

Saffron Beach, who cost a mere 55,000gns at the 2018 Tattersalls December Foal Sale, is out of Falling Petals (Ire) (Raven's Pass) who was sold by Godolphin to the China Horse Club for €235,000 at the 2016 Goffs November Mares Sale. She is a half-sister to the G1 Middle Park S. third Huntdown (Elusive Quality), whose full-sister Continua produced the G3 World Trophy S. and G3 Molecomb S.-winning sire Cotai Glory (GB) (Exceed and Excel {Aus}). The third dam Eternal Reve (Diesis {GB}) annexed the G3 Matron S. and was runner-up in the G1 Coronation S. here and is connected to the leading sire Miswaki. Falling Petals' unraced 2-year-old filly Providenciales (Ire) (Australia {GB}) was a 450,000gns purchase by Blandford Bloodstock at the Book 1 Sale, while she also has a yearling full-brother and foal full-sister to Saffron Beach.

Saffron Beach set sail for home and kept finding in the G2 Duke of Cambridge Stakes. Trained by @JaneChappleHyam. pic.twitter.com/r3Ugwr29pP