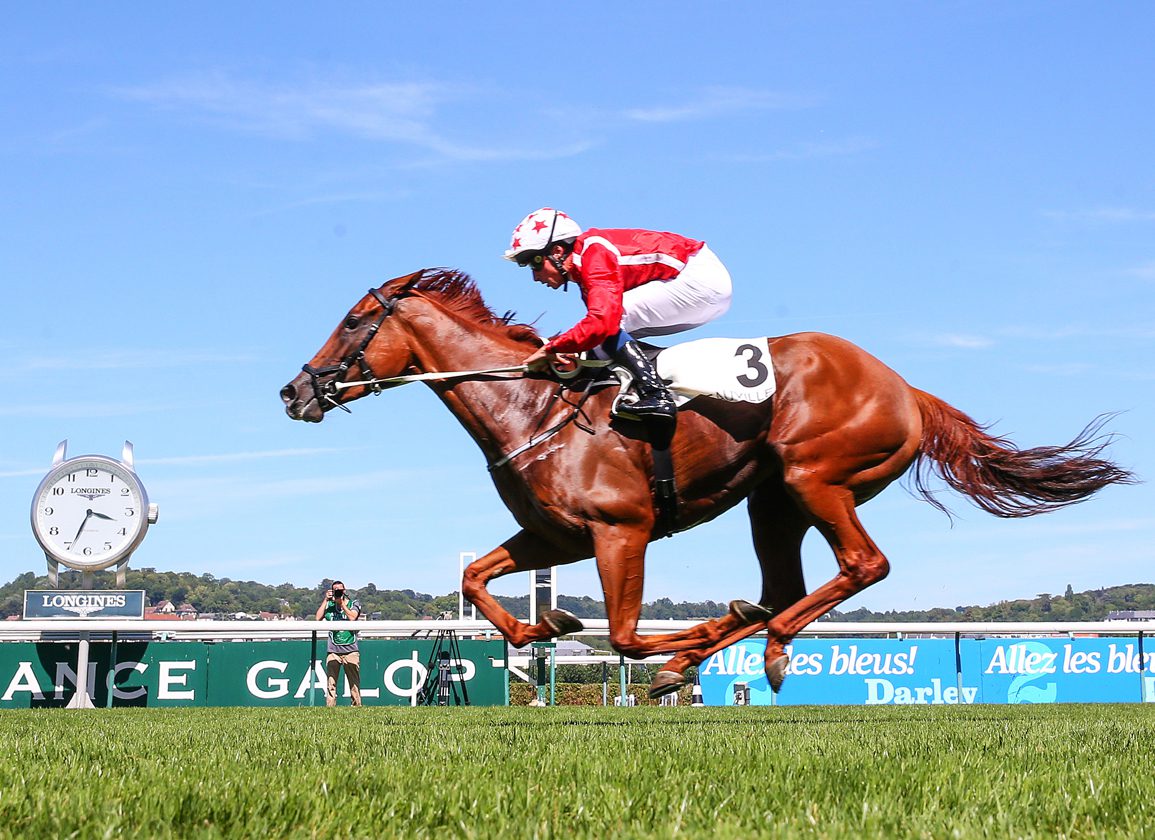 Last term's G1 Sun Chariot S. victrix Saffron Beach (Ire) (New Bay {GB}–Falling Petals {Ire}, by Raven's Pass) posted a fourth in Meydan's Mar. 26 G1 Dubai Turf before regaining the winning thread in Royal Ascot's June 15 G2 Duke of Cambridge S. and continued on a roll with a decisive victory in Tuesday's G1 Prix Rothschild at Deauville. The 3-5 favourite was swiftly into stride and held sway in the centre of the track from the outset of this straight one-mile test. Drawing the sting out of her six rivals by setting a searching tempo throughout, she was stoked up when strongly pressed with 300 metres remaining and withstood every challenge under a late drive to win going away for second elite-level triumph. At the line, she was 2 1/2 lengths too good for the year-younger Tenebrism (Caravaggio), who just held on for second by a head from the fast-finishing Goldistyle (Ire) (Dubawi {Ire}). The latter is a daughter of the storied Goldikova (Ire) (Anabaa), who won four straight editions of this contest from 2008 through 2011.

“She's very strong with a lovely temperament and she is such a nice filly,” said trainer Jane Chapple-Hyam. “It is great to come here to Deauville and win this race. She has a lot of options to come and, I suppose, her main objectives are the [G1] Matron S. [at Leopardstown] and the [G1] Sun Chariot [S. at Newmarket].”

Winning rider William Buick continued, “She is just the sort of horse that makes life of a jockey so much easier. She has a great temperament, she is strong and so well balanced. She has speed, but also stays well and 10 furlongs would not be a problem for her. I kicked early because my main concern was Ryan [Moore]'s filly [Tenebrism], who won here over seven furlongs and has the speed and a turn of foot. Saffron Beach stays well so, up against such a profile, the earlier the race starts the better for a filly like mine.”