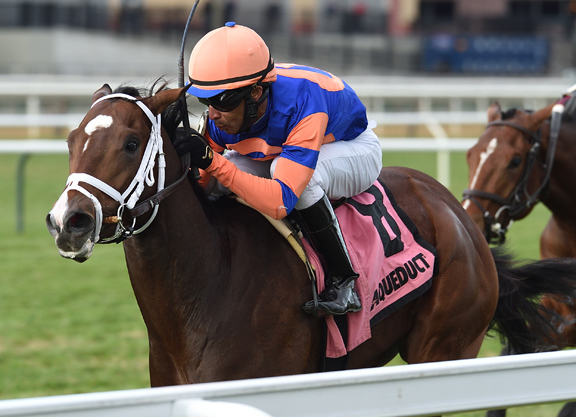 Never Surprised (Constitution) looks to take his perfect record to three-for-three Saturday as he tries graded company for the first time in the GIII Kitten's Joy S. A decisive debut winner sprinting on the turf at Aqueduct Nov. 8, the $200,000 KEESEP buy wired the field when stretching out to two turns next out in that venue's Central Park S. 20 days later. Bred on the same Constitution–Tiznow cross as MGISW Tiz the Law, the bay is favored in this sophomore bow and has three-time Eclipse winner Irad Ortiz in the irons.

Kentucky Pharoah (American Pharoah) is not undefeated in his career, but he is perfect on the grass. Off the board in his first two attempts on dirt in Kentucky last fall, the Calumet homebred graduated by 3 3/4 lengths when switched to the turf in Hallandale Dec. 19. The chestnut repeated with a dominant score in Gulfstream's Dania Beach S. next out Jan. 2.

It's a Gamble (English Channel) also exits the Dania Beach, where he finished fifth last time. A debut winner sprinting on the Saratoga lawn in August, the bay was fourth in the Nownownow S. at Monmouth Oct. 4 and could only manage seventh in Belmont's Awad S. on yielding ground Oct. 31. The New York-bred captured a six-panel turf event at Aqueduct Dec. 4 prior to the Dania Beach.