Neshama by a Nose in Woodbine Oaks 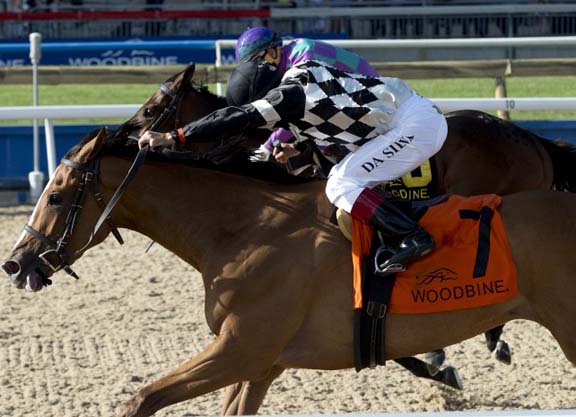 Neshama held off late-closing favorite Gamble’s Ghost by a desperate nose to earn her first stakes victory in the Woodbine Oaks. The bay filly settled just off the pace as Caren took command going into the first turn. She began inching closer leaving the backstretch as the pacesetter scampered some four lengths clear on the second turn. The 15-1 shot found her best stride in the final sixteenth to surge past the tiring pacesetter before just holding off the unlucky favorite.

“I had a very easy trip. It went well for me,” said da Silva. “When Jesse Campbell asked his filly [Caren], she opened up a little bit and I thought I just wanted to keep going and maybe finish second. Then I saw [Caren] just stop and I saw a great chance to win the race. And she ran great. She dug in. She’s a nice filly. I am thrilled

Phillips said she saw promise in Neshama from day one.

“She’s been a nice filly and acted like a racehorse really from the beginning,” Phillips said. “In the fall, she really came into her own and this spring she’s been very professional. She really enjoys her job.”

‘TDN Rising Star’ Gamble’s Ghost, coming off a win in the GIII Selene S., was trapped behind a wall of horses turning for home and was tipped out four wide into the stretch. She forced her way between horses, while exchanging bumps with Crumlin Spirit (Court Vision) and Trini Brewnette (Milwaukee Brew), but once extricated from traffic she closed with a vengeance to just miss the winner. The favorite then survived a steward’s inquiry and a claim of foul by the rider of Crumlin Spirit.

“I was on the rail where I didn’t want to be, but I had to stay there,” explained Luis Contreras, aboard the beaten favorite. “When I tried to tip out to make my move, I could see the opening, but everyone was trying to move at the same time and horses were tiring in front of me. When I made my move, if nothing happened, we would have won.”

A maiden winner over the Woodbine all-weather surface last October, Neshama was a nose runner-up while concluding her juvenile campaign in the Nov. 14 South Ocean S. She resurfaced with a troubled fifth-place effort in the May 1 Lady Angela S. before returning to the winner’s circle with a narrow score in a 1 1/16-mile allowance May 18.

Asked if Neshama might take on the boys in the Queen’s Plate, Phillips said, “I think we’ll enjoy this and we’ll discuss it Monday and Tuesday.”

Catch a Fire, a half-sister to Canadian champion grass mare Sweetest Thing (Candy Stripes), produced a full-sister to the winner in 2015.