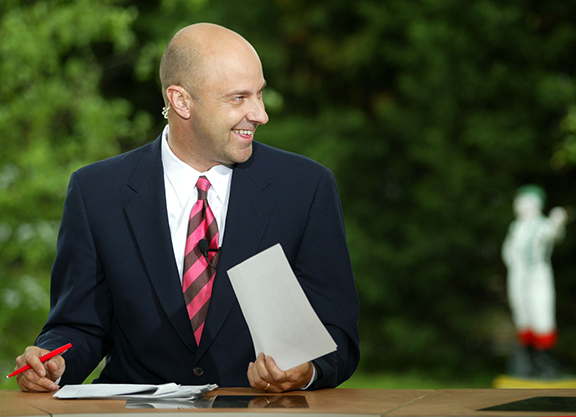 If you've tuned into a major national racing broadcast in the past two decades, there's a good chance you saw and heard Randy Moss. The longtime ESPN horse racing analyst joined NBC in 2011 and has been providing the knowledgeable racetracker's perspective for wide audiences during the network's highly acclaimed coverage ever since. Wednesday, Moss joined the TDN Writers' Room presented by Keeneland to offer his thoughts and opinions on this week's GI Kentucky Derby. Calling in via Zoom live from the Churchill backstretch as the Green Group Guest of the Week, Moss, creator of the revolutionary Moss Pace Figures also discussed the future of data for horseplayers as well as his broadcasting approach.

“I respect Essential Quality because of his versatility and because regardless of circumstance–fast pace, slow pace, inside, outside, sloppy track, fast track–he almost always brings his 'A' game,” Moss said of the Derby favorite. “The vulnerability there, I think, is that his 'A' game is only about average and maybe even a little below average historically for a Kentucky Derby favorite. Looking at the rest of the field, all we have to go on is what we've seen in the past, which is limited. But going back to 1906, which is as far back as the stats go, this Derby field has the lowest number of starts per horse at 5.3. There's probably a lot of improvement that's baked into these horses because they're so lightly-raced. If any of them jump up and surprise us by running an above-average Derby, they'll probably win and Essential Quality will get beat.”

Asked about the proliferation and sophistication of data for horseplayers and what still needs to be done in that realm, Moss said, “Hopefully, we're at the very beginning of what I think could be a mini-revolution in data in Thoroughbred racing. The Gmax GPS tracking technology has obviously had its problems, but hopefully that will continue to improve technologically to where we can really rely on it. Then if Trakus can take the next step forward as well, we can get to the point where we can very accurately say Horse 'A' ran 'X' number of feet during the running of the race. That can make a world of difference for all the various speed figure and pace figure computations. That's the first step to getting to that next level, and I think it's on its way.”

Elsewhere on the show, Joe Bianca, Bill Finley and Jon Green broke down the 20-horse Derby field, the GI Kentucky Oaks and what to look for from Friday and Saturday's loaded undercards in the West Point Thoroughbreds news segment. Then, in the Minnesota Racehorse Engagement Project story of the week, they pondered the future of potential superstar 3-year-old Flightline (Tapit). Click here to watch the podcast; click here for the audio-only version.