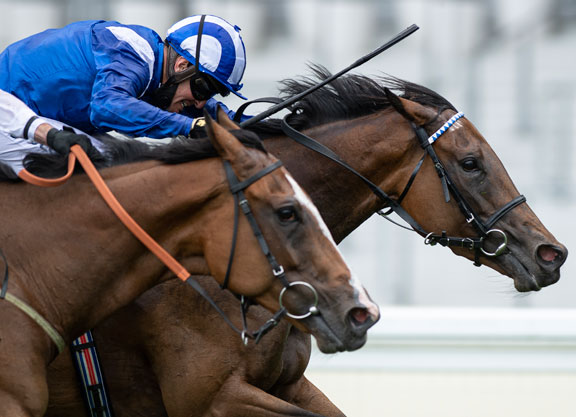 Nazeef has been out in front all year | Racing Post

“We're looking at the Prix Rothschild, but we are just going to look at the Nassau as well in case we can't get to France for any reason,” confirmed the sheikh's racing manager Angus Gold. “The first priority has always been Deauville, but she'll probably be in the Nassau.”

He added of the 4-year-old filly, “I'm sure one day she will go over 10 furlongs, but the thinking was to stay at a mile for the time being. That does depend on the travel arrangements, though, if we are struggling to get anyone over to Deauville with her.”

Beaten only once when third on debut, the Shadwell-bred Nazeef has put together an impressive string of six victories since June 2019. Her three wins this year include the G2 Duke of Cambridge S. at Royal Ascot and she was one of six winners for Sheikh Hamdan at the meeting.

Gold continued, “We thought she'd be Group class this year, but you can only hope they win a Group 1—you don't expect them to. We knew she had a lot more to give and she's rewarded us in spades. She's got ability, is very good looking and has a fantastic attitude, which counts for an awful lot. It's a strong combination.”