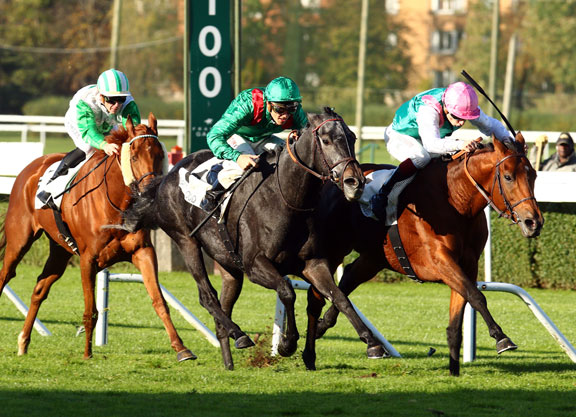 As Vazirabad (Fr) (Manduro {Ger}) loomed with his usual perfectly-timed late thrust in Sunday's G1 Prix Royal-Oak at Saint-Cloud, his history bid looked briefly achieved but he had reckoned without the tough 3-year-old Ice Breeze (GB) (Nayef) and it was that Juddmonte homebred who came out on top to deny a third victory for His Highness The Aga Khan's premier stayer. Always happy sitting in fourth off the generous tempo, the 4-1 shot who had booked his ticket here with a success in the G2 Prix Chaudenay at Chantilly Sept. 30 was sent past Holdthasigreen (Fr) (Hold That Tiger) and into a narrow lead 500 metres out by Vincent Cheminaud. Digging deep to first ward off that challenge and then again to repel the 4-5 favourite in the final 100, Ice Breeze went away late to ultimately score with authority by 1 1/4 lengths from Vazirabad who had no excuses, with Holdthasigreen the only other rival to have a say two lengths behind as they pulled clear of the remainder.

Ice Breeze first came to prominence when beating Shakeel (Fr) (Dalakhani {Ire}) in the G2 Prix Hocquart over a mile and a half at Chantilly June 18, but was given too much to do when a closing fourth behind that rival in the G1 Grand Prix de Paris here on Bastille Day. Unsurprisingly no match for Cracksman (GB) (Frankel {GB}) when nearly nine-lengths fourth in the G2 Prix Niel back at Chantilly Sept. 10, he was upped three furlongs next time and ridden more positively and that combination proved the key as he outbattled the smart British raider Call To Mind (GB) (Galileo {Ire}) and classy compatriot Darbuzan (Fr) (Zamindar) in a solid renewal of the Chaudenay. “This horse has not missed a beat since his debut and has been so consistent and brave,” trainer Pascal Bary said. “The rhythm of the race suited him perfectly and is exactly what he needs, but hasn't had on all occasions so far this season. I have to admit that halfway down the straight when the favourite made his move it looked like he would beat us, but my horse was very brave and showed a lot of heart like he had last time. He is now through for the season and we hope we'll see him again next year.”