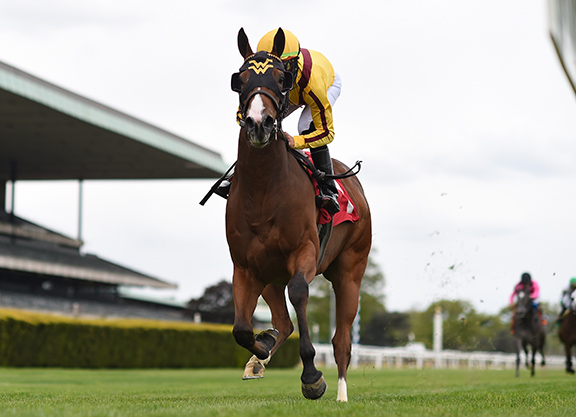 Twilight Gleaming (Ire) (National Defense {GB}), a strong second debuting on the Keeneland main track last month, got to her likely preferred surface of turf Sunday at Belmont and rocketed clear in the lane for 'TDN Rising Star' honors.

Bought for £75,000 by Ben McElroy at the Goffs Orby Yearling Sale last October, Twilight Gleaming became the first starter for her freshman sire when backed down to 3-5 Apr. 8 at Keeneland, and ran a game second despite being pinched at the start and going wide on the turn. Recording a pair of sharp half-mile works in Lexington since, the bay was punched down to 65 cents on the dollar here and broke alertly from the rail. Taking charge early while trying to get out just a bit heading into the turn, the bay led narrowly while well in hand through a :22.26 quarter. Shaking clear into the lane on her own power, the favorite burst away impressively once given her cue by Irad Ortiz, Jr. and cruised in under a hold for the final sixteenth, hitting the wire 7 1/2 lengths to the good. Poppy Flower (Lea) completed the exacta.

Twilight Gleaming is the second winner for National Defense, an Irish National Stud resident who was a French highweight colt and Group 1 victor as a 2-year-old in 2016. He picked up his first winner Saturday in Italy. Dam Thames Pageant is an unraced full-sister to Group 1-placed Mainstream (GB) out of MSW/MGSP Golden Stream and third dam Phantom Gold was a three-time Group winner in England. Thames Pageant produced a colt by Sioux Nation last term.