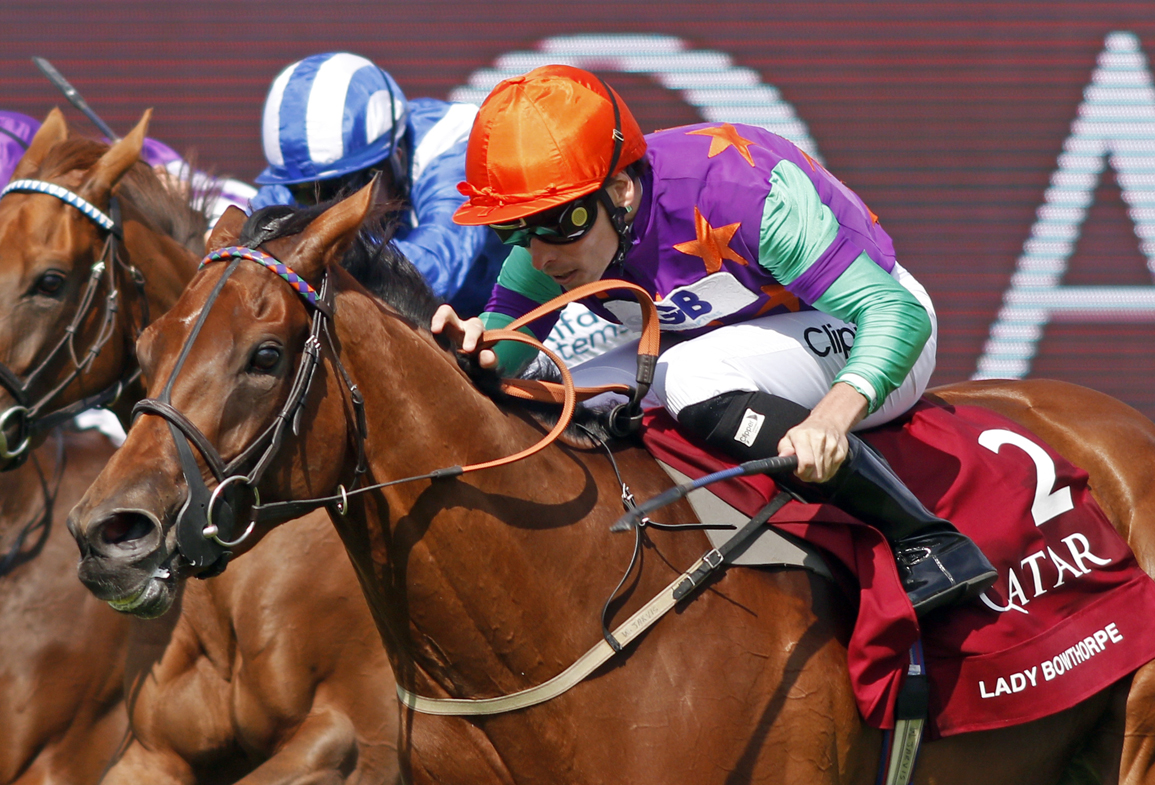 Stopping the 3-year-old momentum in Thursday's G1 Qatar Nassau S. at Goodwood, Emma Banks's Lady Bowthorpe (GB) (Nathaniel {Ire}) swooped to conquer to end trainer William Jarvis's 27-year wait for another top-level winner. Unlucky when fourth in the G1 Falmouth S. over a mile at Newmarket last time July 9, the 10-3 shot raced with only the 9-4 joint-favourite Audarya (Fr) (Wootton Bassett {GB}) behind early as the other market-leader Joan of Arc (Ire) (Galileo {Ire}) was sent on by Ryan Moore. Delivered wide of that long-time leader and Zeyaadah (Ire) (Tamayuz {GB}) by Kieran Shoemark with a furlong remaining, the 5-year-old surged clear to dismiss any stamina fears on her first try at a mile and a quarter. At the line, the habitual strong finisher had 1 1/2 lengths to spare over Zeyaadah, with half a length back to Joan of Arc in third as Audarya proved a major disappointment. “She's a really special filly and she's done nothing but improve,” her rider commented. “It's fantastic for the whole team. She was taking a bit of a hold with me on the way down, so I could tell she was in good form. She appreciates give in the ground and while there was a question about the trip in all her previous races her last furlong has been her best. I knew when she hit the front it was going to take a good one to pass her.”

Coming to the fore when winning Ascot's G3 Valiant Fillies' S. with more than a dash of style over a mile last July, Lady Bowthorpe was sixth in the G3 Atalanta S. at Sandown the following month and in the G1 Sun Chariot S. at Newmarket in October before her winter break. Returning to annexe the nine-furlong G2 Dahlia S. back at Newmarket May 2, the bay was only 1 1/2 lengths behind Palace Pier (GB) (Kingman {GB}) when runner-up in the G1 Lockinge S. at Newbury May 15 before filling that spot again in the G2 Duke of Cambridge S. racing away from what appeared to be a favoured stand's rail at Royal Ascot June 16. In the Falmouth, she was caught up in traffic and forced to come around rivals before powering to the line to be just a length off Snow Lantern (GB) (Frankel {GB}), prompting tears of frustration from her trainer who had been hoping to end the long wait since Grand Lodge's St James's Palace S. success in 1994.

This time, there was to be no hard-luck story as she waited for her chance to strike with Joan of Arc setting an honest pace up ahead. As Audarya failed to pick up in behind, Lady Bowthorpe had just the front two 3-year-olds to concern herself with and after they had tussled for a few strides she burned by in trademark fashion for an emphatic success. “It feels fantastic–we've dreamt about this for a long time,” Jarvis commented. “We always knew she was special and I'm so chuffed for the team at home more than anything, because they work so hard–we only have seven or eight staff. I was confident she'd stay. I was a little worried about Roger [Varian]'s filly [Zeyaadah], because she wasn't stopping but I knew we had that turn of foot. She relaxes so much better now–she's a superstar.”

“I think after she won the Dahlia Stakes that was when I, personally, thought that she should have the Nassau Stakes on her radar and we sort of worked back a little bit,” Jarvis added. “Having said that, she hasn't missed a beat–we went Dahlia, Lockinge, Royal Ascot, Newmarket, she's a very tough mare. I've been dying to run her over 10 furlongs for a long time, but events transpired against us until today. Anyway, I think she has proved that she's even better over 10 than she is at a mile. I've never lost faith in myself as a trainer. Quite a lot of other people may well have done, which is why we've only got 28 or 29 horses in the yard. However, I've got a lovely bunch of staff working for me and they've never lost faith in the way that we operate and they give me everything. We are a family unit and there is a lot of loyalty involved, including with Kieran who I am delighted for. There was a lot of pressure from outside people, saying should we do this or that or leave Oisin Murphy sitting in the weighing room, but it never really crossed out minds.”

Shadwell's Angus Gold said of the runner-up, “If you told me a year ago Zeyaadah would win a listed, a group 3 and be second in a group 1, I would have been very excited at the thought of that so I am thrilled. She will stick at that sort of trip. Jim [Crowley] didn't mention the ground. She won on bottomless, but I don't think that was for her. Jim did say she was moving beautifully.” Audarya's rider William Buick believed that the GI Breeders' Cup Filly & Mare Turf and G1 Prix Jean Romanet heroine had an obvious excuse. “I would say that Audarya just didn't pick up on that ground,” he explained. “She won on fast ground at Royal Ascot and whilst she has run well in some big races on similar ground to today, the difference was that it is just so tacky and gluey. For me, it was the ground that was the issue today.”

Lady Bowthorpe's dam Maglietta Fina (Ire) (Verglas {Ire}), who was a smart sprint handicapper for Robert Cowell, produced Speak In Colours (GB) (Excelebration {Ire}) as her first foal and he flew the flag by winning the G2 Greenlands S., G3 Phoenix Sprint S., G3 Renaissance S. and G3 Ballycorus S. and finishing third in the G1 Prix de la Foret. Lady Bowthorpe is her second, while her third is the Listed Cooley S. third Pretty In Grey (GB) (Brazen Beau {Aus}). Maglietta Fina is kin to the four-times group-winning miler Tullius (Ire) (Le Vie dei Colori {GB}), who was also runner-up in the Lockinge while her pedigree also features Highly Motivated (Into Mischief) who was second to Essential Quality (Tapit) in this year's GII Blue Grass S. Her 2-year-old colt by Muhaarar (GB) is named Master of Colours (GB), while she also has a filly foal by Holy Roman Emperor (Ire).