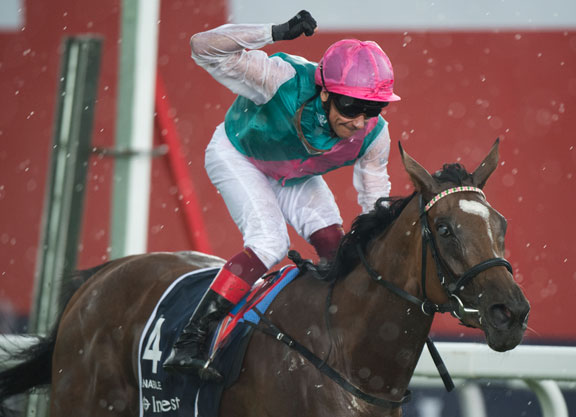 LICENSE TO IMPRESS
Run in a torrent, Epsom's G1 Investec Oaks was as electric as the stormy atmosphere on Friday as Enable (GB) (Nathaniel {Ire}) drew the sting from Rhododendron (Ire) (Galileo {Ire}) to secure an emphatic five-length success in race-record time. Having demonstrated abundant stamina and the dash of speed required to win around Chester when capturing the May 10 Listed Cheshire Oaks, Khalid Abdullah's homebred turned back the 8-11 favourite and turned the screw as she stretched further clear as the market leader faded. “When I saw Ryan not moving I thought I was in trouble, but then he sent out distress signals and I knew my filly would stay and she pulled right away in the last furlong and a half,” jockey Frankie Dettori commented of the 6-1 joint-second favourite, who was a total of 11 lengths ahead of the third Alluringly (Fastnet Rock {Aus}) at the line. “She has only run three times before this and is still a frame, so she will get better and better. She is very genuine and honest and very easy to be around, so I've got to put her up there with some of the best. She surprised me at Chester and again today and I was impressed not just with the way she stayed but with her battling qualities.”

By the time Rhododendron was winning the G1 Fillies' Mile, Enable had yet to see the racecourse and it is a measure of how far she has come that she did not even start favourite for her winning debut over a mile on Newcastle's Tapeta at the end of November. Next seen finishing third behind her much-vaunted stablemate Shutter Speed (GB) (Dansili {GB}) and the G1 Racing Post Trophy fourth Raheen House (Ire) (Sea the Stars {Ire}) in the same 10-furlong conditions race at Newbury Apr. 2 which was used by previous Oaks heroine Light Shift (Kingmambo), she was underestimated for the last time when the 2-1 second favourite behind Alluringly lining up for the Cheshire Oaks. Resoundingly taking that well-supported rival's measure over an extended 11-furlong trip that brought her class into play, the bay was a valid underdog despite most of the major money continuing to force down Rhododendron's odds as the race neared.

Epsom is always an arena of drama, but the lead-up to this card was particularly one to fray the nerves as huge thunderclouds drew nearer as post time approached. It may have been the impending storm that set off the American raider Daddys Lil Darling (Scat Daddy), who bolted on the way to the start and with Olivier Peslier unable to restrain her he exited the side door, she was caught and withdrawn. The next twist came when a clap of thunder saw Pocketfullofdreams (Fr) (Invincible Spirit {Ire}) spook and lose Donnacha O'Brien behind the stalls and when the fillies were eventually housed and released the downpour duly came to add further theatricality to proceedings.

Pocketfullofdreams was quickly forced past the other joint-second favourite Sobetsu (GB) (Dubawi {Ire}) to set an exacting pace and Ryan Moore opted to sit behind the enthusiastic Enable on the smooth-travelling Rhododendron as they ran third and fourth out of any trouble. Frankie pulled the eventual winner around Sobetsu in early straight and with that maneouvre was placed in front before the two-furlong pole, but the favourite was instantly alongside and putting on the pressure. While the Ballydoyle runner would arguably have done enough by the furlong marker to win several Oaks, she could not live with Enable once the imposing Juddmonte representative really began to roll and eat up the ground to run the race faster than any other in history.

For Frankie Dettori it was a fourth edition, while John Gosden was winning for the second time in four years. He still has the same owner's Shutter Speed at home and that unbeaten G1 Prix de Diane-bound filly may not even be the best in his stable by now. “We knew there'd be a strong pace, but I didn't think it would be quite that strong,” the master of Clarehaven said. “I thought the clever thing from Frankie was when Ryan tried to keep us in behind Sobetsu he was aware of it. On a plane to France recently Ryan told me he was very impressed with the way ours had quickened at Chester. He said he thought he had her [on Alluringly] and I put a lot of weight on that because Ryan is quite tight with praise normally. It was an epic battle and I thought the other filly had us, but in the last furlong she really dominated. Frankie and Ryan are two exceptional jockeys, pound-for-pound the two best I've ever put on a horse, and they were on exceptional fillies.” Gosden also handled Nathaniel, who to the surprise of some has managed to upstage his great rival Frankel (GB) by gaining a Classic winner and made this particular success even sweeter for his trainer. “It is great for him. He was a proper Galileo and this was a proper test in driving rain,” he added. “She is a very big girl of massive stature and we can dream of the future. I don't see the point in taking her back to a mile and a quarter and so it's got to be a mile and a half for her. I'm taking it one step at a time, but there are some lovely races like the [G1] Irish Oaks [at The Curragh July 15].”

It is not often that Aidan O'Brien is on the receiving end of a drubbing and he was taking it on the chin as pondered the solid effort of Rhododendron. “I thought she ran very well, everything went lovely and she ran a good race,” he said. “He [Ryan Moore] didn't use the rain as an excuse, he just felt the last furlong seemed like a long furlong. Whether the trip was far enough or because she'd had a very busy day, she still ran very well though. I suppose she wouldn't mind going back in trip.”