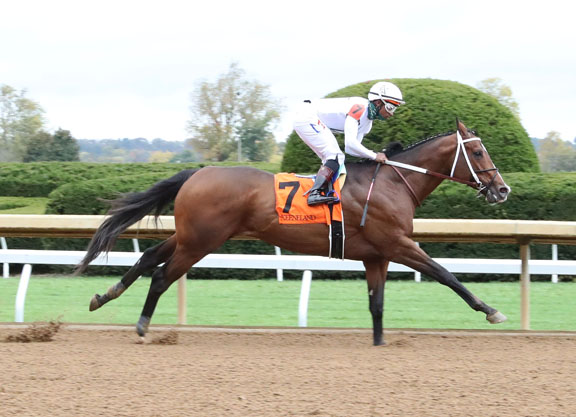 WinStar Farm and China Horse Club's 'TDN Rising Star' Nashville (Speightstown), who took his record to two-for-two with a towering allowance success at Keeneland Oct. 10, could make his next start in the Nov. 7 GI Breeders' Cup Sprint over the same track and distance, WinStar General Manager David Hanley said Monday.

“It's a bit too early for a final decision, but I would say the nothing has been ruled out at this point,” Hanley said. “I haven't discussed it with [WinStar President/CEO and Racing Manager] Elliott [Walden] or [trainer] Steve [Asmussen] and they will be the ones to decide.”

A $460,000 Keeneland September purchase in 2018, Nashville was sent off as the prohibitive odds-on favorite in a sloppy Saratoga maiden Sept. 2 and romped home by 11 1/2 lengths, covering 6 1/2 furlongs in a spectacular 1:14.48 (video). The 1-2 chalk in a non-two-lifetime allowance in Lexington over the past weekend, Nashville led past every pole en route to a 9 3/4-length score (video). Hanley said Nashville has emerged unscathed from the effort.

“He seems to have come out of the race just fine, none the worse for wear,” he said. “He ran such a big race first time out at Saratoga, but you weren't sure that he just didn't run so big because of the slop. I wouldn't say we expected to see the kind of performance he put up the other day, but you sure hope he could reproduce the debut and it was nice to see him do it on a fast track.”

Hanley explained that Nashville had his fair share of issues growing up.

“He had a few little setbacks and we just decided to give him some time,” he said. “There was nothing major that was wrong with him, he had some bone bruising and he tended to be a little headstrong, so we gave him the time and it looks like it's paying off.”

Hanley indicated that if they decide against a run in the Sprint, Nashville could make an appearance in one of the undercard stakes on Breeders' Cup weekend as a steppingstone to the GI Malibu S. at Santa Anita in late December. Nashville is cataloged as a racing or stallion prospect for the Keeneland November Sale, but Hanley said it is unlikely he'll go through the ring.