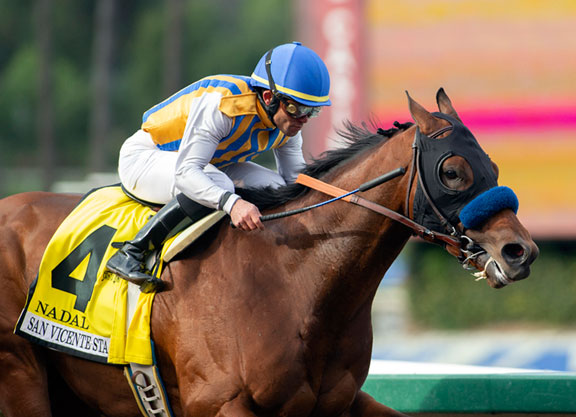 Bob Baffert sends out so many impressive 3-year-olds this time of year, it seems like some become forgotten as soon as the next one does something special. After the dazzling performances of Baffert trainees Authentic (Into Mischief) and Charlatan (Speightstown) in recent weeks, that forgotten horse may be the barn's unbeaten Nadal (Blame). Saturday, the $700,000 Fasig-Tipton Gulfstream buy will look to match his talented stablemates as a likely favorite while making his two-turn debut in the $1-million GII Rebel S. at Oaklawn.

Debuting as a 6-5 favorite Jan. 19 going 6 1/2 furlongs at Santa Anita, the bay overcame a slow start and a speed duel to score going away by 3 3/4 lengths and earn a 'Rising Star' badge of his own. Stepped up quickly in the seven-furlong GII San Vicente S. Feb. 9, Nadal sparred on a quick pace that featured a :44.09 half-mile split and wore down his front-end rival to prevail by three-quarters of a length. Concerns about his ability to stretch out loom after running his final furlong that day in :13.52, but the sharp fractions undoubtedly were a factor in the slow come-home time. Drawing the tricky rail in this 1 1/16-mile test, he removes blinkers and has drilled sharply at his Arcadia base, most recently going five furlongs in :59 3/5 (1/58) Mar. 8.

With seven figures on the line, there is rightfully plenty of competition for the chalk, led by the Steve Asmussen duo of returning Basin (Liam's Map) and local hero Silver Prospector (Declaration of War). A nose second when heavily bet on debut last June at Churchill, Jackpot Farm's Basin graduated in sharp time next out July 21 at Saratoga and made a mockery of the GI Runhappy Hopeful S. Sept. 2 at the Spa, running away to a 6 1/2-length romp in the slop. Unseen since then after suffering a leg injury, he returns with a half-dozen Fair Grounds breezes showing, highlighted by a five-furlong bullet in :59 1/5 (1/16) Feb. 25.

Ed and Susie Orr's Silver Prospector, who made little impact in three turf starts to open his career, followed up a maiden win when switched to the dirt Oct. 13 at Keeneland with an upset of top GI Kentucky Derby contender Tiz the Law (Constitution) in the GII Kentucky Jockey Club S. Nov. 30 at Churchill. Up against it from a pace standpoint when finishing a distant fourth in the Smarty Jones S. here Jan. 24, the gray produced a career high when rallying to a 97-Beyer success in the GIII Southwest S. Feb. 17.

Maggi Moss and Greg Tramontin's No Parole (Violence),a 'Rising Star' and buzzsaw through three starts in Louisiana-bred company, will get the acid test while shipping in for the Tom Amoss barn. Debuting as a 7-10 choice going six furlongs Dec. 15 at Fair Grounds, the $75,000 Keeneland September graduate crushed his rivals with a 14 1/4-length romp and replicated that with a 13 1/4-length rout in a muddy state-bred allowance Jan. 11. Sent two turns for the first time in the LA-Bred Premier Night Prince S. Feb. 8 at Delta, he again went to the front and cruised to victory, this time by 6 1/2 lengths. The bay has drilled four times in the interim at his Fair Grounds base, capped by a half-mile move in :47 3/5 (2/107) Mar. 8.

August Dawn Farm brings yet another 'Rising Star' to the mix in Three Technique (Mr Speaker). Runner-up in his first two starts, including Basin in the aforementioned July 21 Saratoga heat, Bill Parcells's runner rolled to a 5 1/2-length graduation Aug. 31 at the Spa and repeated in an Aqueduct optional claimer Nov. 20. Making his sophomore bow in the Smarty Jones, the dark bay chased wire-to-wire winner Gold Street (Street Boss) while finishing a clear second. Locally stabled for Jeremiah Englehart, he carved out a best-of-122 bullet when going four furlongs in :46 flat Feb. 29.