My Boy Jack 'Happy' After Lexington; Ships to Churchill Saturday 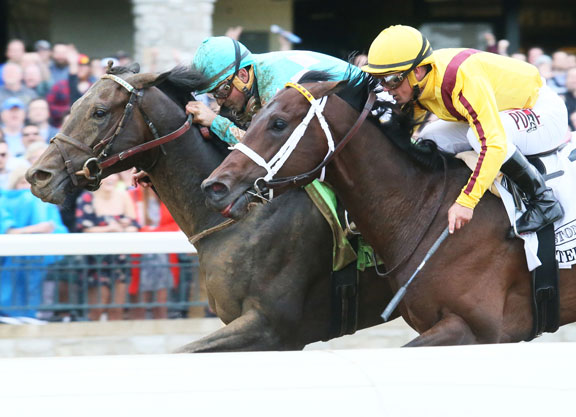 My Boy Jack nails Telekinesis in the Lexington | Coady

Don't Tell My Wife Stables and Monomoy Stables' My Boy Jack (Creative Cause) walked the shedrow Sunday morning at Keeneland, a day after his come-from-behind victory in the GIII Stonestreet Lexington S. that earned him a spot in the Churchill Downs starting gate for the GI Kentucky Derby May 5.

“He ate up everything last night and this morning he is very bright and acting like he didn't even run,” Julie Clark, assistant to trainer Keith Desormeaux, told the Keeneland notes team. “He was a little tired after shipping here Wednesday, but now he is a happy horse.”

My Boy Jack picked up 20 points for his victory to give him 52 toward the Derby and put him safely among the top 20 point earners that will make up the field.

Clark said My Boy Jack likely would ship Saturday to Louisville, where he will give Desormeaux a Derby starter for the third consecutive year.

“We have a filly coming in for the Doubledogdare on Friday,” Clark said. “Even if she didn't come, I'd like to stay here a few more days and let him chill out.”

Stonestreet Stables' 'TDN Rising Star' Telekinesis (Ghostzapper), second by a head to My Boy Jack in his third career start, is doing well the morning after the race, said David Carroll, assistant to trainer Mark Casse. Carroll said Casse and the Stonestreet connections will determine where the son of Ghostzapper will run next.

“He ran a super race; we're very proud of him,” Carroll said. “Beaten by a nice horse who was a lot more seasoned. He cleaned up his feed last night and jogged sound this morning. We'll try to teach him to relax, and I think the game plan would be to keep him around two turns. It's just a question of where that race would be.”

Greyvitos (Malibu Moon), owned by Triple B Farms, also is doing well after his fourth-place finish in the Stonestreet Lexington. He was grazing outside the stakes barn Sunday morning with groom and exercise rider Fernando Cano.

Trainer Adam Kitchingman said by phone that the Malibu Moon colt came out of the race in “excellent shape.”

“I'm very happy, he just got extremely tired yesterday,” Kitchingman said. “I've got a couple races in mind, but I just want to give him a few more days to make sure everything's great, and then we'll make a decision on what we're going to do.”