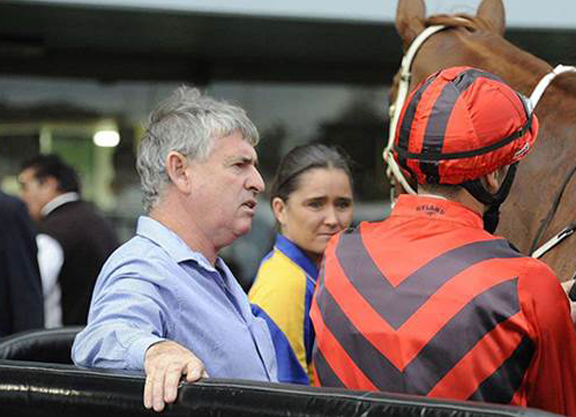 Racing New South Wales stewards ruled Wednesday that Australian trainer Paul Murray would be disqualified a total of 3 1/2 years and fined A$1,000, due to finding elevated levels of cobalt in a stored sample taken from a runner in his care, Alma's Fury (Aus) (Refuse to Bend), who finished second in the Doncaster Prelude at Royal Randwick Apr. 13, 2013. The ban is effective immediately and lasts until Mar. 8, 2021.

The stewards found Murray guilty of all five charges brought against him, including administering a prohibited substance to the gelding with the premise of affecting the performance of the horse on race day and also having in his possession at his Kembla Grange yard when a June 17, 2014 stable inspection turned up substances that had not been registered, prescribed, dispensed or labelled in compliance with relevant State and Commonwealth legislation, as well as being in possession of a substance labelled 'Concentrated Trace Mineral' found to contain elevated levels of cobalt. The first three breaches entailed three years, the fourth rule breach resulted in the A$1,000 fine and the fifth breach of the rules resulted in another year ban, but six months will be served concurrently during the three-year time period.