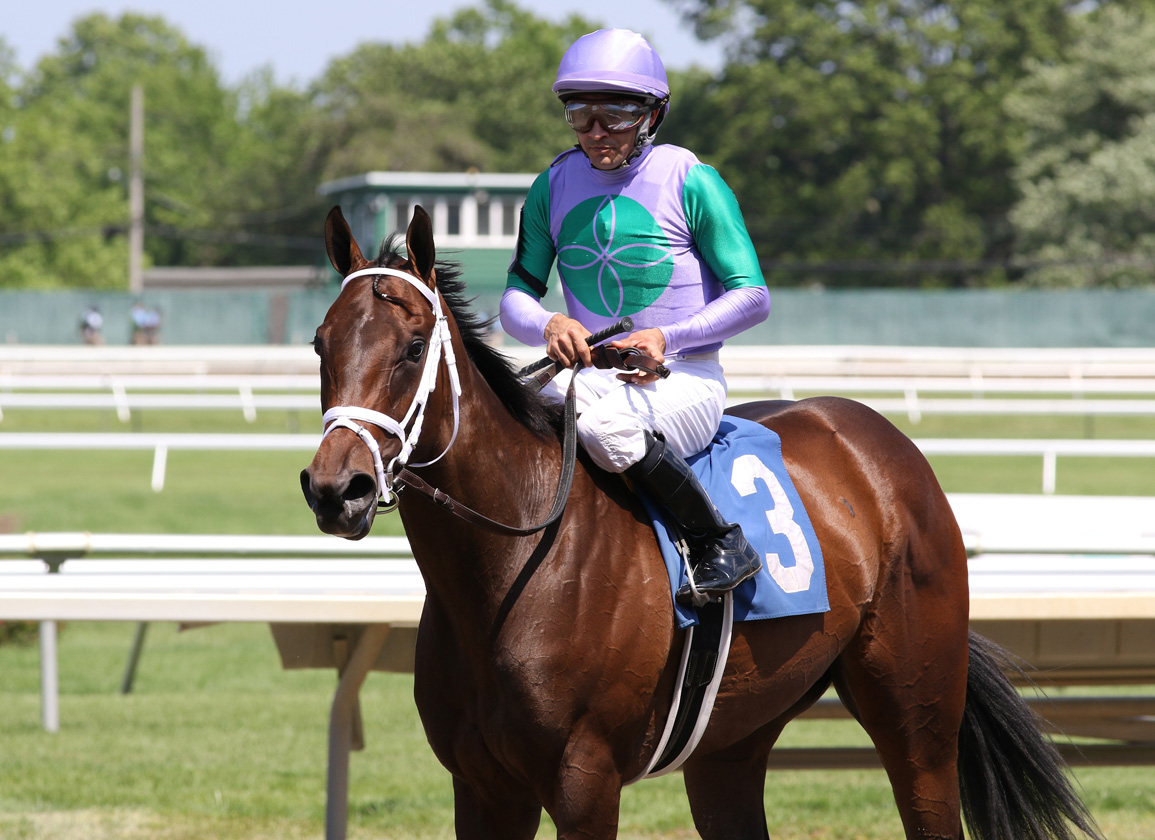 While her connections were hoping for a good showing on debut, no one really quite foresaw the performance 'Hagyard TDN Rising Star' Munnys Gold (Munnings) put on when she ran off the screen June 17 against Monmouth Park maidens, stopping the clock in a scorching :56.60 for five furlongs. Jacob West, advisor to the filly's owners, Robert and Lawana Low, was watching the race from his phone in the midst of a round of golf and admits he initially lost her in the shuffle after the break. By the time she found her way to the front, the first quarter was put up in :22.41 and she'd rolled through a 'touch crazy' second split of :45.22, but was doing it easily. Not long after she coasted in and the final time went up, the congratulatory text messages began flooding in.

“We didn't expect that from her first race–you never do–but we were pleasantly surprised,” West said in a phone interview Monday. “We always believed in her.”

A few days after the fact, and West reports that no news is good news, the filly having come out of the eye-catching effort in great shape. The current plan is to ship Munnys Gold up to Saratoga, get her settled in and on a routine, before deciding which race is next on her radar; the $175,000 GIII Schuylerville S. July 14 and the $200,000 GIII Adirondack S. Aug. 7 are the most likely targets. Where she goes will solely depend on how she's doing when it comes time to make the decision.

When he purchased her for $300,000 from the Fasig-Tipton Kentucky Select Yearling sale in July of 2021, it was the filly's physical which stuck with West the most vividly.

“The July sale produces many athletic and precocious horses, and they had this filly in a great spot. She was a well-made, beautiful horse,” West replied, when asked what encouraged him to spend the fourth highest amount paid for a filly at the auction last year. “Her pedigree was a little light at the time, but I prefer an athletic conformation over pedigree.”

He did add that, while her page wasn't heavy with black-type, it wasn't lacking, either. Champion 2-year-old Anees makes an appearance under the fourth dam and the filly's sole older half-sibling was placed in his two starts. Four broodmare sires in her female line all impart a heavy influence of stamina: Medaglia d'Oro, Distorted Humor, Unbridled, and Alydar. Combined with the speed on top from her sire Munnings, and it bears very advantageous fruit when it works out. Early reports from the farm provided their first inkling of budding talent, and by the time they were loading the filly onto a truck bound for the track, the anticipation was clear.

West gives Todd Pletcher and his crew a lot of the credit when it comes to providing seamless transitions from the training farm to racing careers. It's an operation known for its ability to get the best out of young horses and the results tend to speak for themselves. When Munnys Gold shipped up to Monmouth Park, a move with no external meaning beyond stall availability and being able to race in her own backyard, assistant trainer Anthony Sciametta was quick to get hands on her and the filly is thriving. The move north to New York is anticipated to be just as smooth.

Of course, the process is always made easier with enthusiastic owners, and Lawana and Robert Low are the epitome of the word. The former is rumored to be an eagle-eyed handicapper and a trip to the races is always a family affair. West was generous in praise he maintains the owners richly deserve after decades of patience and faith in the sport. He described them as two of the most humble and 'down to earth' people in the room.

“The Lows don't take anything for granted, so when a special horse comes along, they get very excited. For them, it's love the animal, first, and a career, second. Hopefully, Munnys Gold will be another exciting runner for them.”