Munnings’s Kimari From Worst to First in Indian Summer 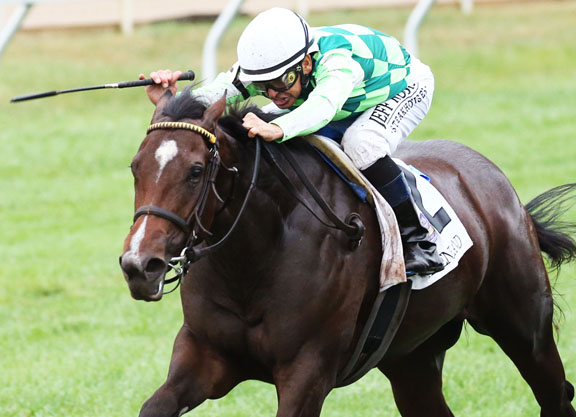 One of two fillies in the field and looking to give trainer Wesley Ward a quickfire running double (with possibly more to come) in the afternoon’s ‘Win and You’re In’ qualifiers for the Breeders’ Cup Juvenile Turf Sprint, Ten Broeck Farm’s Kimari was ridden quietly from the back of the pack by Mike Smith–to nearly everyone’s surprise–came wide for the drive and raced over the top of the heavily bet Chimney Rock (Artie Schiller) to win Sunday’s $200,000 Indian Summer S. at Keeneland.

Having set a searching gallop in winning her maiden by 15 lengths over the Keeneland main track Apr. 25, Kimari again made the bulk of the running in the G2 Queen Mary S. at Royal Ascot June 19, only to be overhauled in the shadow of the wire by the subsequent MG1SP Raffle Prize (Ire) (Slade Power {Ire}). She employed front-running tactics in drilling next-out GI Natalma S. winner Abscond (Blame) by four lengths in Saratoga’s Bolton Landing S. Aug. 14 and was even-money to add to her stablemate Four Wheel Drive (American Pharoah)’s victory in the GIII Futurity S. about 15 minutes earlier.

Content to trail as the field’s other filly, Fast Scene (Fast Anna) cut out the early fractions, Kimari was still last, but traveling well into the lane. Steered out widest for the drive, she allowed first run to Chimney Rock, but kicked it into another gear entering the final furlong and was along for a half-length success.

“Julio Garcia has been breezing her from behind horses, knowing today that she’d probably break slow,” said Ward. “Julio has been sitting back and coming around horses with her and kind of been teaching her to rate. I really didn’t think she was going to be that far back but thank God [jockey Mike Smith is] a cool sitter and a go-getter, and he rode a beautiful race. Everything came through today and we’re looking forward to Breeders’ Cup.”

Kimari, owned by the same connections that campaigned Sunset Glow (Exchange Rate) to a runner-up effort behind Lady Eli (Divine Park) in the 2014 GI Breeders’ Cup Juvenile Fillies Turf, has a yearling half-brother by Exaggerator that was RNAd for $120,000 at Keeneland September last month and a foal half-brother by Quality Road.