Munnings Half to Lady Aurelia Runs to the Hype; Named 'TDN Rising Star' 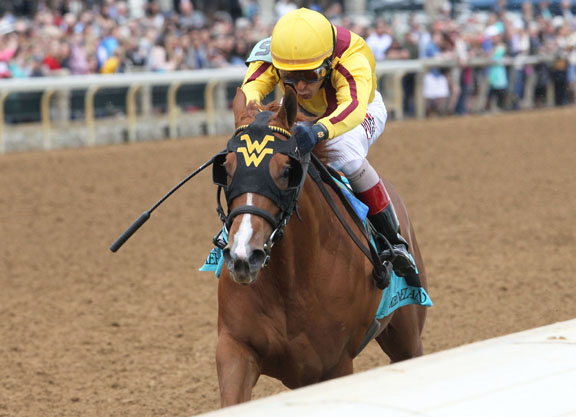 Lady Pauline (Munnings), a half-sister to none other than these connections' superstar Lady Aurelia (Scat Daddy), Hwt. 2yo Filly-Eng & Fr, G1SW-Eng & Fr, SW-US, $834,945, followed in that one's hoofsteps Friday with a practically pre-ordained first-out success worthy of the 'TDN Rising Star' distinction. Pounded at the windows and off at 1-5 with an unassuming worktab on display and while facing mostly colts, the Stonestreet homebred beat the gate like a typical Wesley Ward-trained baby and barreled along on the engine under stout John Velazquez restraint. Giving a glimmer of hope to a challenging rival in upper stretch as she was a bit late with her lead change, she soon switched over and showed a very impressive turn of foot to blow away her competition by 9 3/4 lengths, stopping the clock in :51.71. Two Dot (Soldat) completed the exacta. Stonestreet paid $1 million for the winner's dam at the 2005 Keeneland November sale, and Barbara Banke's operation bought back globe-trotting Lady Aurelia for $7.5 million at last year's Fasig-Tipton November sale (see Banke Bringing Home Lady Aurelia). D' Wildcat Speed was not bred back in 2017 after foaling Lady Pauline on May 5, 2017, but produced a Medaglia d'Oro filly this Feb. 13.